President Abdel Fattah al-Sisi announced that three yacht ports will be established from the revenues of the Suez Canal, in a bid to stimulate tourism to support the national economy. 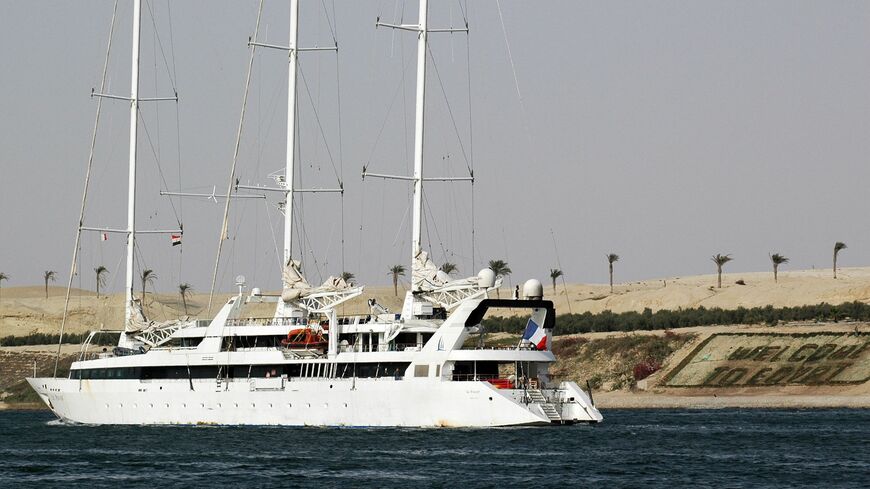 The French luxury boat Le Ponant cruises on April 21, 2008, in the Suez Canal towards the Mediterranean Sea near the city of Ismailia, northeast of Cairo. - AFP via Getty Images

Egyptian President Abdel Fattah al-Sisi recently announced that three yacht ports will be established from the revenues of the Suez Canal to support the national economy.

According to the Suez Canal Authority (SCA), the strategic waterway achieved its highest monthly revenue in its history in August, a staggering $745 million. Annual revenue for the 2021/2022 fiscal year was $7 billion.

Sisi’s announcement came during the opening on Sept. 8 of the SCA’s Olympic Village in Ismailia and the inauguration of new maritime units of the SCA.

The president said at the time that the three yacht ports along the canal will be financed solely by the SCA’s income, without affecting the state budget allocations. He argued that the project is not a luxury, but rather a necessity in light of the yacht traffic crossing the canal throughout the year.

Sisi further noted that the ports are part of the state's comprehensive development plan, both in the Mediterranean Sea and the Red Sea, which would generate jobs and attract more tourists for a new type of tourism.

Head of the SCA Osama Rabie confirmed in a previous meeting with Sisi on Sept. 4 that the SCA is working on logistics and services to turn Egypt into a yacht crossing reception corridor. These services, he added, include fueling, electricity, water, quick maintenance, yacht reception centers and storage services.

In late July, the Egyptian cabinet approved a bill regulating foreign yacht tourism in Egyptian marinas and seaports and creating an online platform, “Single-Window for Yacht Tourism,” which will supervise implementing and upgrading the yacht tourism strategy and ensuring its sustainability, according to the Ministry of Transport.

Adel Amer, economist and head of the Egyptian Center for Economic Studies, told Al-Monitor that the three planned ports are a step to increase the canal’s revenues.

“Investing the high revenues of the Suez Canal in projects that serve the state and attract and promote foreign investments is extremely positive," Amer said. Catering to yachts will help the canal become "an integrated ecosystem that allows the growth of industries, such as shipbuilding and maintenance, financing service offerings and yacht tourism.”

Wael Kaddour, a former board member of the SCA, argued that Egypt has neglected yacht tourism for a long time. “These ports will attract tourists from Europe, especially in the coming winter, by leveraging the excellent location of the canal, especially in light of the ongoing Russian war on Ukraine. Europe is witnessing an energy crisis due to its dependence on Russian gas, therefore we have high expectations of huge European tourists this season,” he told Al-Monitor.

Kaddour added that Egypt will carry out major expansion and development projects in the ports of Port Said, Ismailia and Port Tawfiq to accommodate the largest number of yachts along the canal line and provide facilities and incentives for anchoring yachts for long periods.

He further called on the state to expedite other pivotal projects in the Suez Canal. “Industrial zones must be established. This will increase job opportunities, curb unemployment and attract foreign investments, thus reducing Egypt's debts and contributing to solving the country's economic crisis,” he said.

Ahmed el-Shamy, maritime transport adviser to the Ministry of Transport, told Al-Monitor, “This step will put Egypt on the right path in its competition with Turkey, Greece and Israel, who are ahead of us in this field, despite our excellent location.”

Shamy believes the ports of El-Arish and El-Tur Harbor, which are affiliated with the Suez Canal Economic Zone, should also be developed to give Egypt a competitive advantage. He said that Egypt has created an appropriate legislative environment for yacht tourism in tandem with the political will to expand this industry.

Investing in the canal, he said, will also promote Egypt's efforts to develop the blue economy, or the sustainable use of ocean resources for economic growth, "which implies good investment in water resources, especially marine tourism.”

Also, he said, Egypt's green economy continues to grow ahead of the global climate summit, COP27, which it will host in Sharm el-Sheikh in November.