The Suez Canal Authority proclaimed neutrality in Russia’s invasion of Ukraine and announced that it will not ban Russian and Ukrainian vessels from traversing the canal. 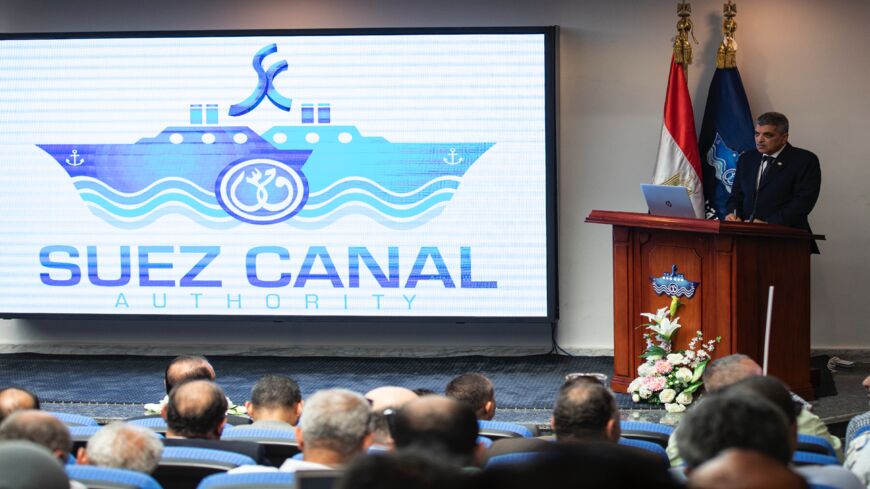 CAIRO — Amid rumors about the Suez Canal closing off access to Russian ships, the Suez Canal Authority (SCA) announced complete neutrality in the Russian-Ukrainian crisis, stressing that it will not restrict Russian and Ukrainian vessels from passing.

In televised statements to Sada al-Balad satellite TV channel on March 1, SCA head Lt. Gen. Osama Rabie said the canal is a neutral global canal and an international trade corridor that will not be affected by political differences and wars, in accordance with international agreements and treaties regulating maritime navigation.

He also denied any request from the United States to prevent the passage of Russian ships.

On Feb. 24, Russian President Vladimir Putin announced a military operation in Ukraine. The war, which has been ongoing to date, was condemned by the United States and the European Union, both of which imposed economic sanctions on Moscow.

Meanwhile, Ukraine’s President Volodymyr Zelenskyy called on the world countries to show solidarity with Kyiv and shut waterways to Russian ships and airspace to Russian flights.

In his TV interview, Rabie said that Egypt did not receive any request from the United States to prevent Russian ships from passing through the Suez Canal, adding that the maritime laws are not subject to political tensions and wars and that it is impossible to restrict passage of all ships in the waterway in all circumstances as per the Convention of Constantinople.

The Convention of Constantinople, which regulates the use of the Suez Canal and was signed on Oct. 29, 1888, stipulates that the Suez Canal shall remain free and open to the passage of all commercial and warships without any discrimination in times of war and peace.

He stressed that the Suez Canal is linked to the global trade movement and that there are many transit fees mechanisms for ships passing through the canal. He said container shipping rates rose by more than 20% and Brent crude oil prices surpassed $100 per barrel, which subsequently increased transit fees.

Rabie pointed to the possibility of reducing transit fees next month based on the global developments and the global transport market, adding that a study is underway to exempt container ships coming from conflict areas from charges imposed on crossing delays.

Speaking to Al-Monitor on condition of anonymity, a source at the SCA stressed that Egypt is keen on distancing the Suez Canal as an international trade corridor from any differences, political disputes or wars, in accordance with international maritime agreements and the Convention of Constantinople. Therefore, the SCA will not prevent any Russian or Ukrainian ship from passing, he added.

The source said, “The Suez Canal is open to all ships of different nationalities and stands at equal distance from all parties. The idea of preventing any ship from passing is not on the table, and [Egypt] insists that this vital facility will continue to serve global trade as the fastest, shortest and safest trade corridor in the world and is keen on keeping it away from any disagreements.”

The source added that passage through the Suez Canal is highly secure despite the tensions and disputes in the surrounding region and that neither the Russian nor the Ukrainian ships pose a threat to Egypt’s security.

Pundits and observers contacted by Al-Monitor confirmed that the SCA’s decision not to prevent Russian and Ukrainian ships from passing is in line with the international conventions and treaties regulating maritime navigation, which requires neutrality of the waterway.

Ahmed Sultan, an international expert in maritime transport and a former adviser for maritime affairs to the Ministry of Transportation, told Al-Monitor that Egypt is keen to implement the Convention of Constantinople regulating the use of the Suez Canal.

Therefore, he continued, the officials’ decision to keep it neutral and not to prevent Russian and Ukrainian ships from passing is in line with the international agreement and preserves the freedom of navigation away from any disputes, political differences or wars between countries.

Sultan added that the decision is in the interest of global navigation and a guarantee to preserve this navigation and its speed, given the importance of the Suez Canal, its excellent location and its major impact on the global trade movement. It is thus necessary to keep it away from political differences or disputes, and Cairo is keen to continue doing so due to the importance of this vital facility for its national economy, he said.

He noted that a decision to prevent the passage of some ships in the Suez Canal is related to Egyptian national security requirements, which means that ships that pose a threat to the security of the country are restricted. That was the case when Egypt went to war with Israel in 1967 and 1973, he said, adding that the passage of Russian and Ukrainian ships does not constitute a threat to Egypt and therefore they will not be prevented from passing through.

For his part, Mostafa Kamel el-Sayed, a professor of political science at Cairo University, said that the SCA’s decision not to ban the passage of Russian and Ukrainian ships proves Egypt’s neutrality and commitment to international agreements and treaties on navigation, mainly the Convention of Constantinople.

Sayed told Al-Monitor over the phone that the passage of Russian and Ukrainian ships does not threaten Egyptian security, which is why Cairo took a neutral position, in contrast to Turkey's decision to prevent the passage of warships in the Black Sea, because it sees that they pose a threat to its own national security.

He added that Egypt is keen to guarantee freedom of navigation through the Suez Canal given its strategic importance to global trade exchange, particularly since the COVID-19 pandemic and Russia's war on Ukraine resulted in higher oil, grain and food prices in the world.

Yahya al-Kadwani, a member of the parliamentary Defense and National Security Committee, believes the SCA’s decision not to prevent Ukrainian and Russian ships from passing would increase international confidence in Egypt and its good management of the Suez Canal, which is the most important vital facility influencing the global trade movement that was plunged into contraction due to COVID-19.

He added that the decision is supported by the international agreements regulating navigation, which require neutrality and shielding the movement of ships from political differences and wars so as to ensure that global navigation is not affected in any circumstances, and which Egypt is keen on.

Kadwani said that the Suez Canal will not be affected by Russia's war on Ukraine and is supposed to generate higher revenues as usual.