The Garbage Festival teaches Egyptians the value of eco-friendly living and serving society through recycling. 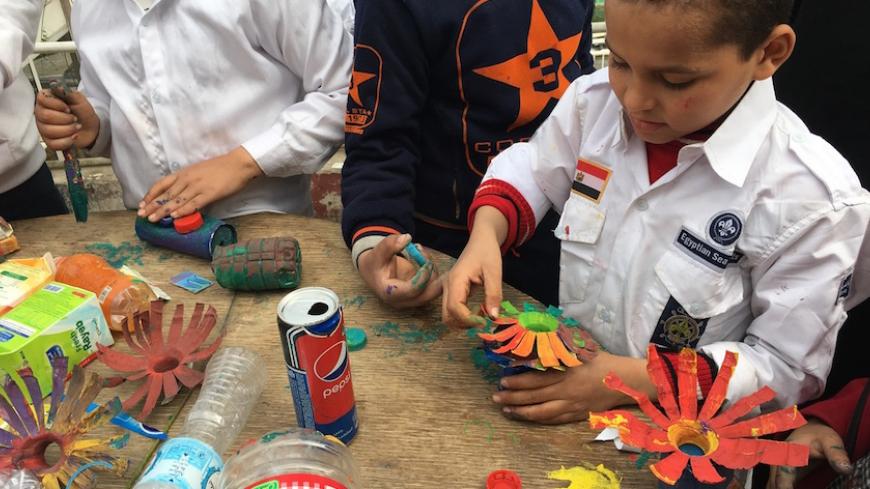 A young child makes a money box from a can at the Garbage Festival in Cairo, March 10, 2017. - Salwa Samir

To gain entrance to the festival, organizers require that a person bring five empty cans, five plastic bottles, 1 kilo (2.2 pounds) of old paper and five glass jars. Called the Garbage Festival, the event aims to raise awareness among citizens, especially youths, about the hidden value of garbage and how one can earn money from it.

"The name of the festival is certainly both provocative and odd," Emad Anwar, the festival organizer, told Al-Monitor. "We selected this name in order to attract people's attention to our message."

Anwar, the head of Adam Foundation for Human Development, a nongovernmental organization established in 2012, said he and fellow organizers want people to know that they can turn solid waste into products and earn money from them.

An estimated 75 million tons of trash end up on Egypt's streets every year, according to local media. The trash includes industrial waste, some of which eventually makes it into the Nile. To get rid of this waste, the country needs 2 billion Egyptian pounds ($111 million) every year. The Egyptian capital alone produces 19,000 tons of waste daily that is thrown onto the streets.

Between the 1940 and 1990s, waste collection in Cairo was based on garbage collectors known as the Zabaleen, who hailed from rural areas and settled in a slum settlement at the base of Mokattam Hills on the outskirts of Cairo.

Since then, the Zabaleen have been roaming Cairo using their donkey carts or trucks to collect rubbish either from the streets or by knocking on the doors of residents to take their waste in return for a humble sum of money.

Then they bring the collected trash to their neighborhood, which is named after them, and sort it out. They sell anything that can be recycled and leave the organic leftovers to feed their pigs.

By this method, the Zabaleen created an efficient system that was both eco-friendly and profitable. But in 2009, when the government of Hosni Mubarak ordered the pigs slaughtered during the swine flu outbreak, the refuse collectors couldn't dispose of the organic waste. As a result, it accumulated in many parts of the city.

In 2003, waste management faced another problem when the government contracted foreign companies to collect garbage. The doormen of each residential or office building collected the rubbish and put it in large refuse bins in front of the buildings so the foreign contractors’ garbage trucks could pick it up.

However, after 10 years of participation in solid waste management in Cairo, the companies' performance has been nothing but a dismal failure.

The ongoing problem of waste management forced the organizers of the festival to shed more light on this issue. Using innovative methods, they try to serve society without giving the authorities additional financial burdens.

To apply their ideas practically, they recently opened a store in one of Cairo's neighborhoods and named it Zebala, using the Arabic word for "garbage."

Locals can bring their waste to the store and be paid after they separate paper, aluminum, bottles, leftovers and rubber. The organizers then sell the separated trash to recycling factories.

"If this example can spread in Egypt, it will help provide financial resources to serve society," Anwar said. "This will be a thousand times better than depending on donations."

He believes that when individuals learn their waste has a financial value, they will spread the idea among their friends and relatives.

"This means that this idea can spread quickly in society," he said. "After 10 years, young people here in the festival will not throw garbage in the street. They learned how to use it correctly to earn money. This is what we want to teach people."

Dozens of children and young people attended the festival. Most of them showed up in the company of their parents.

Warda Ragab, a housewife, was one of the people who showed up at the event. She said she did not expect that waste could be turned into such useful products. "In fact, I didn't have any idea that the garbage can be used in making products," Ragab, in her mid-30s, told Al-Monitor.

She attended the event together with her three children. Ragab was delighted and astonished when she listened to a volunteer at the event talking about the different uses of plastic bottles and cans.

"I will not throw them away again," she said of plastic bottles. "I will ask my children to make colorful products with them."

One of her children, Ahmed, stood close by. "Look, I will turn this can into a moneybox. When I return home, I will put my coins in it," the 9-year-old boy happily told Al-Monitor, while holding a half can in his hand after he painted it with colors.

The monthlong festival, which started March 10, features seminars at schools, universities and companies on means of separating waste and selling it or turning it into products.

Speaking at festival seminars are representatives of the Egyptian Environmental Affairs Agency and the Ministry of Education, who tell the audience how to separate refuse.

Organizers said festival activities also include the collection of plastic bottles and cans from the streets by volunteers, who then talk with passersby about their ideas and encourage them to recycle.