Eco-friendly Lebanese designers are creating chic clutches and other products from plastic bags, bottles and other discarded materials. 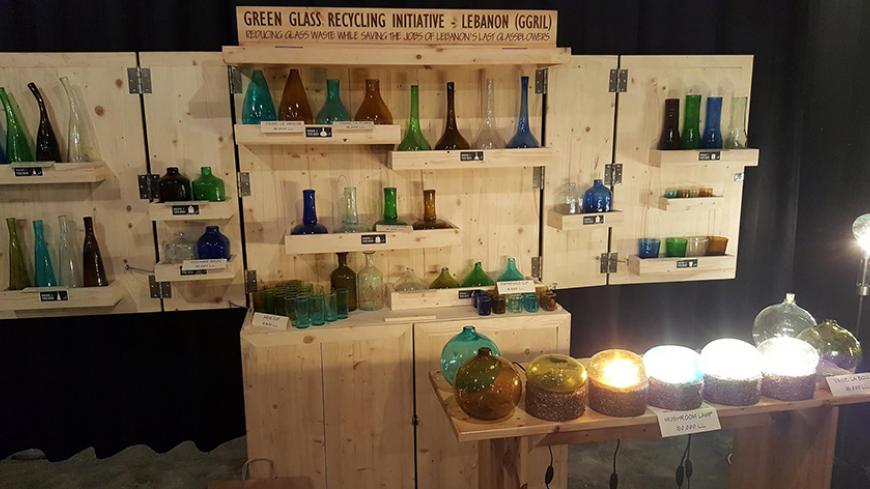 The carafes, water pitchers and glasses in this undated photo were made from used bottles. - Cedar Environmental Consultancy

In a country plagued by a garbage crisis ongoing since summer 2015, several Lebanese designers have rolled up their sleeves to save glass, plastic and rubber from already full landfills. The colorful and practical designs of NK by Nour Kays, Waste Studio and the Green Glass Recycling Initiative Lebanon make chic clutch bags out of plastic bags and maps and cups out of old bottles.

Local and regional initiatives in Lebanon have encouraged people to sort garbage at home or to dispose of plastic, glass and paper at recycling centers, but few nationwide measures have attempted to address the country’s garbage crisis on a larger scale. In this vacuum, some artists and environmental experts have focused their time and energy on finding small-scale solutions that will have a positive effect against the ever-growing number of plastic bags and used bottles. One such initiative is Recycle Lebanon, launched in 2015 with the aim of giving a second life to discarded materials through innovative designs.

NK by Nour Kays is an established Lebanese brand known abroad. Kays, a graphic designer, got the idea of doing something with the plastic bags she accumulated at home while studying at Kingston University in London in 2013. She ultimately turned her large stockpile of shopping bags into her final project, heat pressing and sewing them to transform them into clutch bags. Back in Lebanon a few months later, Kays launched her own collection of clutch bags and accessories with the help of family and friends. Her collection has since diversified to include fashion accessories, luggage and key chains featuring endangered animal species.

Kays introduced her latest collection, Plastic Fantastic, at an open studio event last month during Beirut Design Week, during which people could wander among her colorful and unique designs. Each object is one of a kind.

“I used 1,600 supermarket plastic bags just this year,” Nour Kays told Al-Monitor. “I know that this will have a small impact overall, but by never using plastic bags to do my shopping and by presenting my designs, I demonstrate alternatives to people. Since the garbage crisis, our small community of designers with recycling ideas is growing in number, and it is a pleasure to meet them and go to each others’ and other exhibitions together.” These days, Kays is focusing on creating more malleable objects.

The Waste Studio also exhibited during Beirut Design Week. Two friends, Stephanie Baddour and Waleed Jad, founded the studio in 2006 to focus on recycling plastics. Their first bag, called the Kiss el-Dekkene (“grocery bag” in English), was created from discarded banners containing nonrecyclable plastic flex. They only sold it to their friends, family members and colleagues. In 2012, Baddour and Jad decided to expand, and Marc Metni, an environmental consultant, joined the team.

“We then got a proper studio and started researching other materials that could be used for fashionable and eco-friendly designs,” Metni told Al-Monitor. “We prioritize the reuse of material such as plastic, rubber from inner tubing, seat belts, recycled paper as well as leftovers from boat covers.”

The studio starts with individual pieces of material, which are then brought together by designers. Every piece is thoroughly cleaned with small amounts of water and white vinegar instead of chemical detergents. Like Kays' designs, each Studio Waste recycled product is unique. There are now 35 models of colorful, street-smart, quality bags, accessories and homewares available.

“We believe that we should be responsible in our attitude and our actions, with the aim of ensuring environmental sustainability,” said Metni. “Thanks to us, material that would have ended up in a landfill gets a second chance.” Between 2013 and 2015, the team reused more than 600 advertising banners, the equivalent of five to six soccer fields.

Glass bottles have also found a second life through design. Following the destruction of the only colored-glass recycling plant in Lebanon during Hezbollah's 2006 war with Israel, Ziad Abi Chaker, CEO of the environmental consultancy company Cedar Environmental, and his team collected thousands of green and amber glass bottles while racking their brains to come up with a way to prevent them from adding to Beirut's waste problem.

“Imagine, the factory we lost not only manfactured glass, but also recycled glass bottles,” Abi Chaker told Al-Monitor. “After three or four years of collecting bottles, our storage was full, and we no longer had space. That’s when I met Ghassan Khalife and his brothers, the last glass blowers in Lebanon and who were close to bankruptcy.”

Khalife needed new designs and new points of sale, so a collaboration was born with the founding of the Green Glass Recycling Initiative Lebanon. The Khalife and Cedar Environmental teams began work on a new line of fresh and modern glassworks. Vases, decorative items, lamps, cups and other items saved the glass blowers’ company and led to some 500,000 glass bottles being recycled and reused at an affordable price.

“Of course, our market is not very big, but it targets people who are aware of the pollution situation in our country and who want to help and spread the word,” Abi Chaker said. “Cedar Environmental makes no profit out of it, as 80% of the profits goes to the Khalife brothers and 20% to the distributors, which are alternative spaces in Beirut and art galleries.”

Abi Chaker acknowledges that glass blowers won’t solve Lebanon's trash crisis, but they can at least use their profession for a noble cause. Through these initiatives, trash might find a second life in fashion or in homes in Lebanon and abroad.