In waste-plagued Lebanon, green initiatives are popping up to promote recycling and reuse material, such as a traditional hand-blown glass shop and an eco-friendly microbrewery. 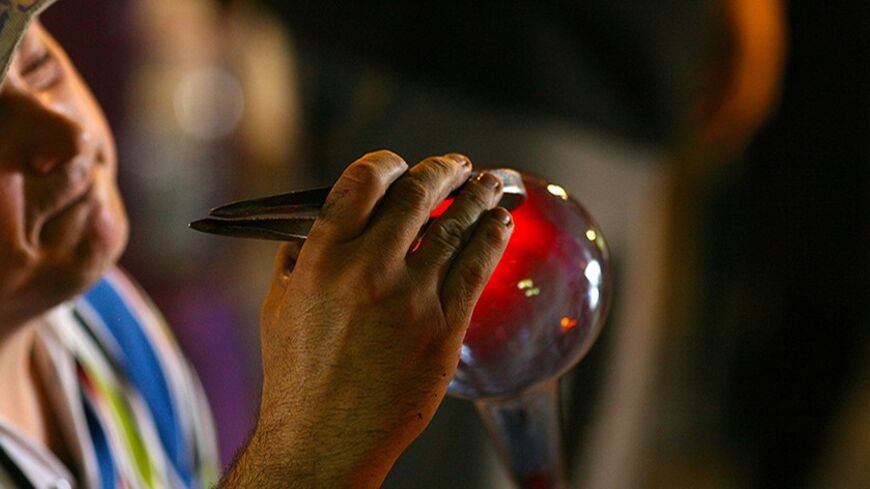 Lebanon is a country with massive waste problems, its inhabitants creating an estimated 1.57 million tons of waste per year. As the country struggles to implement widespread waste management practices that make use of reusable and recyclable material, some ingenious people in Lebanon are coming up with creative new ways to do their part by turning trash into something of value. From recycled hand-blown glass to an eco-friendly microbrewery, these projects are bringing green thinking to the masses.

In Sarafand, a coastal city in southern Lebanon, the Khalife family kept the Phoenician tradition of glassblowing alive for generations. But in recent years, business slowed to the point where six months ago, the company was ready to close for good, due to competition with the cheaper goods from the international market and a lack of distribution points.

That tradition will now be preserved by the family’s collaboration with Ziad Abichaker, an environmental and industrial engineer and CEO of the waste-management company Cedar Environmental, which created the Green Glass Recycling Initiative (GGRIL).

GGRIL was brought about as a consequence of the 2006 war in Lebanon. In July of that year, Israel destroyed the country’s only green-glass manufacturing plant in the Bekaa Valley. This was an important factory for alleviating the glass-bottle burden on the environment. In their remanufacturing process, up to 50% of their raw material to make new green glass and colored bottles came from reclaimed glass bought from their network of recyclers.

“It was a win-win situation for everyone involved, including the environment,” says Abichaker.

The factory was never rebuilt and the loss of the plant has resulted in the importation of glass bottles by beer and wine companies. About 70 million green and amber glass bottles end up in Lebanon’s landfills.

Cedar Environmental, which operates almost a dozen recycling plants in Lebanon on the municipal level with a zero-waste policy, accumulated an enormous stockpile of colored bottles while Abichaker developed a solution. The Khalife family was a natural option for an outlet for the recycled glass, according to Abichaker.

In November 2013, two years after receiving the seed money to get the at-cost venture off the ground from his Arab World Social Innovator award, the team began producing GGRIL products.

Six months later, the project has moved more than 12 tons of a 60-ton stockpile. GGRIL products — which include modern-style vases, carafes, cups and lamps with bases made from recycled pallets or paper pulp waste — can be found at nine different distribution points in Lebanon. Local and international orders have totaled more than $20,000 of work for the Khalife family. According to Abichaker, the Lebanese glassblowers have now had more work in the past five months than in the past five years put together.

This project is in for the long haul. “We’ll be here for at least the next five years,” says Abichaker. By the end of 2014, he predicts that the Khalife family will be back to work full time, with at least 20 different distribution points in Lebanon.

The glassblowers are appreciative as well, happy that they can keep working in a family tradition that has been part of their lives from the time they were children.

Nisrine Khalife, 32, is in charge of painting and decorating the different glass pieces. She stands in the Khalife Brothers shop, holding a cobalt-blue swan dish. “This was something my grandfather used to make. I used to go around with my grandfather to deliver goods. Ever since I was aware of things, I remember growing up around the glass-blowing,” says Khalife.

Abichaker is not the only person in Lebanon choosing to better the environment through glass. Other people are working on smaller-scale projects, such as Wissam Muases, a Syrian artist who heads up the collective Artafif. The initiative has been operating for about two years in Lebanon, and one personal project of the founder's, focused on recycled glass, is showing some early signs of success.

Muases opened up a small shop where he works and lives in Furn al-Chebbak. In his overcrowded workshop, his one employee, Rami, a Palestinian Syrian who lives in the Shatila refugee camp, vies for space among large plastic wash bins, a polisher, plastic crates filled with green and amber colored bottles and a grill-like machine that heats the glass. Lebanese beer brands such as Almaza and 961 get turned into glasses and carafes of all sizes, while wine bottles can be used as vases. Muases even has a use for the tops, using them as lamp covers on his intricate plastic tree lamps made from wire covers.

Currently, Muases only has Rami working two to three days per week, finishing up to a hundred pieces each day. His future plans are much bigger, though. He wants to engage the Syrians who work sorting through trash and involve them in the collection system. Rather than discouraging them from the livelihood, he wants to help professionalize their work. He also plans to double the operation in his tiny workspace and expand beyond glass to make bedding from recycled materials for Syrian refugees outside of Beirut.

For this project, though, all depends on funding and expanding current distribution points. But Muases and co-founder Ramia Suleiman are confident they will soon get the funding they need to grow as big as their goals.

“We want to recycle as big a quantity as we can, and to do a more interactive process with people. To have it done by default that when people finish drinking their bottles, there is a place to put it in a container close to the bars, and they do it,” says Muases.

One bar is about to become a symbol for eco-friendly spaces, in the seaside city of Batroun. Jamil Haddad, 30, is a windsurfing native of the city and the man behind the ambitious “Colonel” project. Not only is he creating a new beer, Colonel, to hit the commercial market in June, but he has collaborated with Abichaker to create a one-of-a-kind green microbrewery/bar/restaurant/bed-and-breakfast. Abichaker says that it is the only project like it in Lebanon — or in the entire Middle East.

The building is made entirely from recycled material, aside from the steel beams, including recycled wood pallets and Eco-Board. This durable material was designed by the Cedar Environmental team and made from plastic bags. Through the utilization of Eco-Board rather than concrete or stone, the company has recycled over two million plastic bags — a fact that has Abikchaker and Haddad thinking about submitting their project to the Guinness Book of World Records for the first microbrewery built using so many plastic bags.

As Haddad walks through the still partly skeletal building, he explains the concept. The 5,000 square meter property, dusty and brown now, will be covered in vegetation by June. One whole side of the building will be blanketed in green plants, both inside and out. The motto for construction is, "Nothing goes to waste.” The mantra will be brought to life with an irrigation system that reuses all of the water for the vegetation.

These projects are not the only ones in Lebanon working to help alleviate the burden of waste in a country that does not yet prioritize recycling on a large scale. Other companies and individuals are joining this green sector, such as Chreek, a company focuses on turning junk into home and garden furniture. And though there were only an estimated 44 recycling bins throughout Lebanon in January, put out by waste collection company Sukleen, people are trying to change that. Last month, a program started to pick up recycled materials from offices in Beirut.

Regardless, change still largely depends on the will and ingenuity of the people to think of creative ways to move from wasteful to a “zero-waste society,” Abichaker’s ultimate goal. With waste generation estimated to climb every year by 1.65%, by 2030, Lebanon could end up with 2.3 million tons of waste. It is clear that change is crucial.