A first-of-its-kind eco-friendly restaurant in Egypt serves homestyle food in a fully recycled setting where there is no internet, television or air-conditioning. 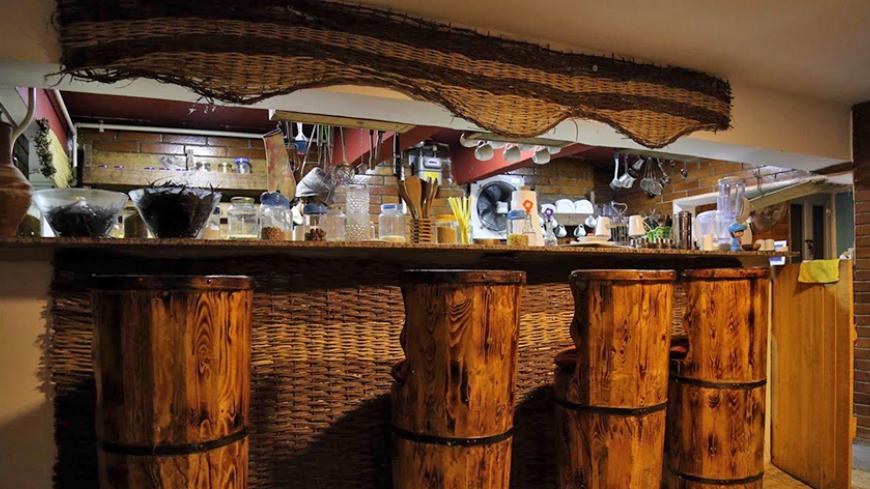 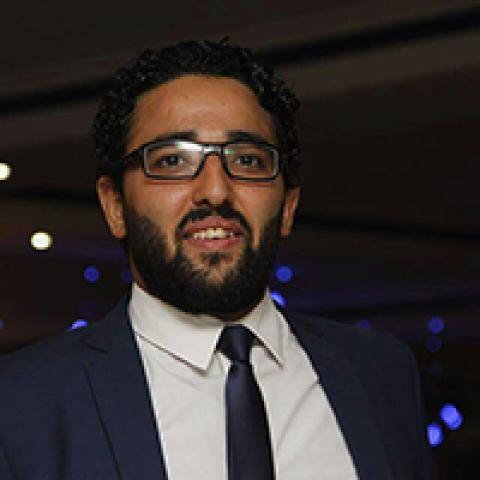 CAIRO — After a long and hectic day at work, Marina Ayoub, a government employee, impatiently walks to the quiet and first eco-friendly restaurant, Mashrou’ Mat’am (Restaurant Project), which she considers to be a “haven” where she can relieve the stress of eight hours of work.

Engineer Bishwi Rifaat and tourist guide Catherine Raafat established the restaurant. They used recycled materials to decorate the basement of an old building in central Cairo, where there is no internet connection or noise-causing televisions. The restaurant’s round tables are made of old tires, while the seats are made of wooden pallets. Painted pottery vessels, which are not a typical trait in modern restaurants, have replaced flower vases, and a small white candle lies on each table of the restaurant.

The founders of the restaurant rented the space from the building's owners for a period of three years.

“I feel comfortable as soon as I set foot in here. The place is very quiet. The setting is so comfy, and the dim lights offer a feeling of comfort,” Ayoub enthusiastically told Al-Monitor. “Simplicity is the name of the game here, and the food is very similar to my mother's food,” she said as she ordered pasta.

The restaurant is characterized by low prices compared with other restaurants. A dish of pasta sells for 15 Egyptian pounds ($0.80).

In many ways, the restaurant followis traditional Egyptian style. The carpets are hand-woven and the wall is decorated with wicker accessories. The library shelves are made of old pallets and hold used books.

The eating spot opened a year ago, and it took Raafat and Rifaat two months to renovate it and come up with the furnishings at a cost of approximately 10,000 Egyptian pounds ($500).

“The restaurant is specifically unique because it restores people’s connection with nature in a quiet atmosphere that is usually missing in most restaurants,” Ayoub said.

“When we decided to set up the restaurant, we mainly wanted it to be environmentally friendly,” Rifaat, 34, told Al-Monitor. “We wanted to bring our customers back to nature by isolating them from the noise and uproar of the outside society, ” he added, as he repaired a table in a side room of the restaurant.

There are not many electrical appliances inside the restaurant, nor is there a TV, a mobile network or any internet connection, because the restaurant is located in the basement of an old building.

Raafat, 26, told Al-Monitor as she served the pasta dish to Ayoub, “Our goal is to make our customers feel comfortable and at home. We do not treat our customers as customers; we treat them as friends.”

Raafat cooks and serves the food to the customers, while Rifaat helps in some administrative work and table setting.

“Unlike traditional restaurants that serve fast food, Raafat and Rifaat serve home-style food, and this is what distinguishes them from nearby restaurants,” Ayoub said.

“Here, we offer healthy home-style food instead of unhealthy fast food. We treat customers as guests and not only customers, which makes some of them participate in the food preparation,” Rifaat added.

There are no hired cooks or waiters in the restaurant; Rifaat and Raafat assume all the roles. Raafat does ask her 20-year-old brother Albert to help them out during the weekend and on Thursdays because this is when the restaurant is usually full. Assuming all these roles by themselves has helped Raafat and Rifaat cover the expenses of the restaurant. Also, the restaurant's customers do not complain about the absence of professional chefs or waiters.

A piece of marble and a set of glass jars containing food that the restaurant operators personally prepared separate the American-style kitchen from the guests, who can see the whole kitchen from their seats. This is something that Raafat and Rifaat boast about.

According to Rifaat, the restaurant was a deserted basement, but they managed to rebuild it using thermal bricks after they were given the green light from the owners of the building.

“Our restaurant is environmentally friendly. We do not use plastic. We use glass instead. We always recycle our waste. Even the oil we use is turned into soap,” Raafat said. Rifaat and Raafat recycle everything.

There are no air conditioners in the restaurant. There is only an extractor hood in the kitchen.

Rifaat said, “Being an engineer, I managed to redistribute the air inside the restaurant in a way to keep the atmosphere mild throughout the year. But we are sometimes forced to use fans during summer."

Asked about the odd name of the restaurant, Raafat and Rifaat — who have been friends for five years — laughed and said, “When we wanted to set up our own project, we were only aiming for one that could cover our living expenses given the high cost of living and the absence of job opportunities in the fields of engineering and tourism, so we established this restaurant and named it after the idea behind it. We never subsequently changed the name, because many customers liked the idea.”

Egypt has been experiencing an economic crisis for some time now. According to the Central Agency for Public Mobilization and Statistics, the rate of inflation in Egypt has risen to 32.5% this year — a rate not witnessed in the country for 30 years — amid an increase in the unemployment rate, bringing the number of unemployed to 3.6 million. The unemployment rate is 12.5%.

Several small projects have been launched in Egypt by young people in an effort to counter the high unemployment rate. Egyptian President Abdel Fattah al-Sisi announced last year year that the banking sector would eventually be pumping 200 billion Egyptian pounds ($11 billion) to support small- and medium-sized enterprises. Sisi established a committee to find ways to support small and medium projects.

Abu al-Shawk told Al-Monitor, “The project is based on recycling, a culture and an economy that does not exist in Egypt. It is good to find an eco-friendly restaurant that relies on recycled materials. This is all very new in Egypt.”

Inside the restaurant, which consists of a large lounge and an open kitchen, there is a room in front of the kitchen where the restaurant's tools and equipment are manufactured. “We made all the kitchen tools, the shelving, the tables and the chairs ourselves here in this room,” Rifaat said.

The government is exhorting young people to start such projects. Sisi has repeatedly announced over the past year — which he named Year of the Youth — that the country will provide full support to small- and medium-sized youth projects.

Raafat and Rifaat hope that this small room will turn into a factory where materials are recycled and sent to restaurants. They hope that this concept will set a new trend in Egypt and lead to reducing waste and taking full advantage of all the materials that usually go to waste.