In a conference on June 9 and within the framework of the global TED Education Clubs, 10 children from the Gaza Strip talked in English about their ideas, life and ambitions. 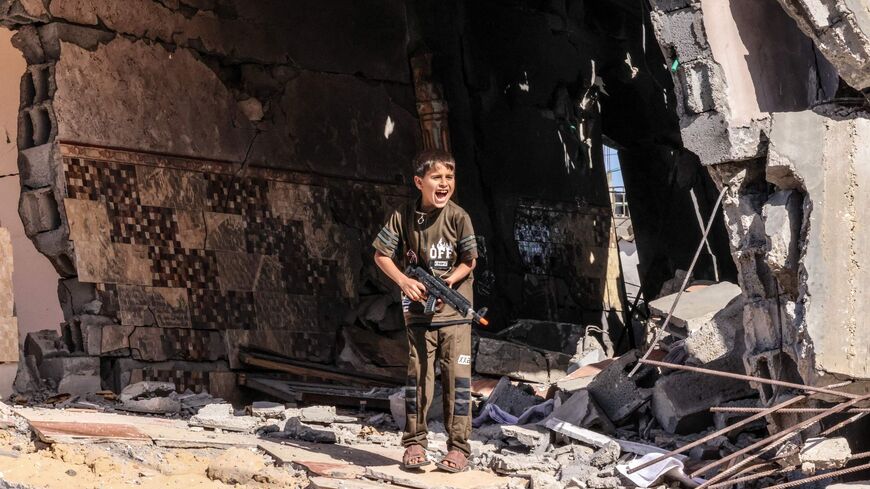 A Palestinian child plays with a toy gun amid the ruins of a building destroyed during the recent Israeli bombing in Rafah, in the southern Gaza Strip, on May 26, 2021. - SAID KHATIB/AFP via Getty Images

GAZA CITY, Gaza Strip — Over the course of a full year, Gazan children participated in training courses in TED Clubs at the Elite Modern School. The training courses culminated in an in-person conference held at the Arab Orthodox Cultural and Social Center in Gaza on June 9 in the presence of 300 public figures, representatives of civil society, journalists and pioneers. During the conference,10 children presented stories in English about their lives, ideas, suffering and ambitions, within the framework of the global TED Education Clubs in 130 countries, to highlight the population’s suffering under the Israeli blockade and successive wars on the Gaza Strip, the last of which was in May 2021.

On June 9 during a conference, 10 children presented stories in English about their lives, ideas, suffering and ambitions, within the framework of the global TED Education Clubs in 130 countries, to highlight the population’s suffering under the Israeli blockade and successive wars on the Gaza Strip, the last of which was in May 2021.

The TED-ED Student Talks Program aims to support students and provide them with an environment conducive to exchanging, discussing and presenting creative ideas in the form of short TED-style talks. Educators at schools, school administrators and students over the age of 13 can participate in the program.

“The presented ideas also touched on bullying and divorce in society. They also encouraged the adoption of new approaches, such as working on self-employment platforms, as an opportunity to solve the problem of widespread unemployment. They also discussed the impact of the war on Gaza and its population, and the restrictions on Gazans’ movement and travels,” he added.

Aub al-Hunud explained that the students were selected based on several criteria, including their ability to speak English and generate ideas with positive values through the use of body language.

“They have been trained for a whole year at the Elite Modern School, where they directed their talk to the local and international community in a bid to bring about change as to the many social misconceptions,” he said.

“The idea came up three years ago, but with the outbreak of the coronavirus and the Israeli war on Gaza, we had to postpone the program until 2022. But we finally had a creative experience rich in ideas based on innovation and inspiring experiences,” he added.

Abu al-Hunud said, “Our school continues to graduate a new generation of students with high skills in various fields to represent Palestine. We provide them with an environment and incubator in all fields ranging from hackathons to challenges and tournaments related to robotics and artificial intelligence.”

UNICEF reported that 326,000 children in the Gaza Strip are registered within its organization, pointing out that one in every three children in Gaza needs psychological support to help them deal with the violence, pressure and fear they are exposed to in their daily lives due to the situation and the Israeli blockade.

The Gaza Strip’s children are the most vulnerable group to mental illness due to the devastating wars waged against the coastal enclave over the years, which is mainly manifested by excessive nervousness, constant screaming, and fear of loneliness or darkness.

The World Health Organization documented more than 210,000 cases of mental disorder among children in Gaza.

Lyan Abu Shaaban, 10, from Gaza City, told Al-Monitor, “Being selected for the TED program is a beautiful dream for me. I was lucky to have the chance to go through this exciting experience, and to share my research and ideas with the world, to tell them about the peace that I miss and always search for.”

She spoke of the terror and fear she experienced in the 2014 Israeli war and the latest round of violence in 2021, which was more painful and terrifying.

“This was my chance to express all that I lived through in these difficult days with the sound of shelling, explosions, electricity cuts; to talk about how we fled our house in search of safety amid crippling fear of losing the people we love,” she added.

Tim Khader, 9, from Gaza City, told Al-Monitor, “As a child of two doctor parents, I decided to take part in the TED program to talk about the coronavirus pandemic, which triggered fear and anxiety in me, and how the virus almost killed my family.”

“I was thrilled to be able to share my experience with the world. It was my first time on a stage before a large crowd who came to listen to me, which boosted my self-confidence,” he added.

According to the UN, the Gaza Strip is virtually unlivable for its 2 million people whose incomes and access to health care, education, electricity and drinking water service have drastically dwindled 10 years after Hamas took control.

“Across the board, we’re watching de-development in slow motion,” Robert Piper, the UN coordinator for Humanitarian Aid and Development Activities in the Occupied Palestinian Territory, said back in 2017.

“Every indicator, from energy to water to health care to employment to poverty to food insecurity — every indicator is declining. Gazans have been going through this slow-motion de-development now for a decade.”

“We talk about the unlivability of Gaza. When you’re down to two hours of power a day and you have 60% youth unemployment rates … that unlivability threshold has been passed quite a long time ago,” he added.