With the help of a team of local engineers, a school in Gaza City managed to create the first human-like robot for educational purposes using local tools and equipment. 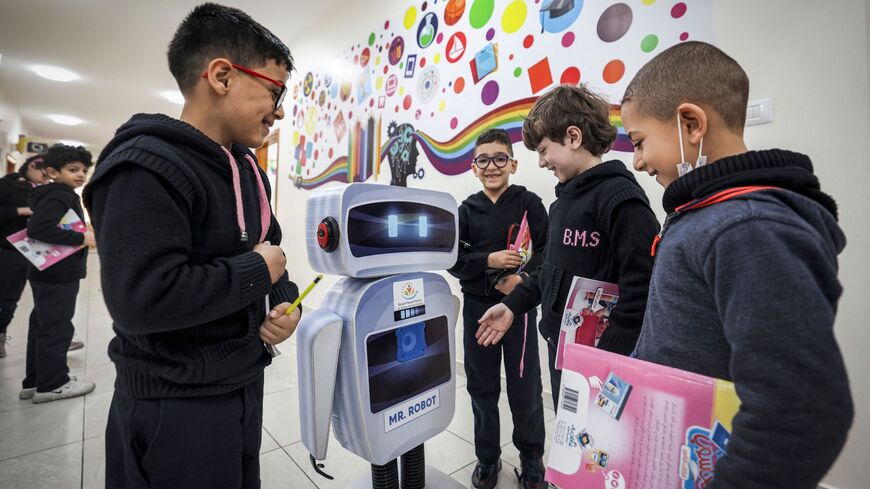 Palestinian students interact with a locally made educational robot during a science class at a private school in Gaza City on Nov. 30, 2021. - MAHMUD HAMS/AFP via Getty Images

GAZA CITY, Gaza Strip — With the help of a team of local engineers, a prominent school in Gaza City has built its first human-like robot for educational purposes using only local tools and equipment.

The private Elite Modern School has formed a robotics team consisting of students aged 11 to 15 who helped build the robot with the help of engineers in the fields of mechatronics engineering (an engineering science combining electricity and mechanics), software engineering, and computer and communications engineering.

Majed Abu al-Hunud, director of the Elite Modern School’s Center for Excellence in Creativity and Innovation and supervisor of the robot invention, told Al-Monitor that the goal behind the creation of this humanoid robot is to help children learn programming and future skills, the most important of which is innovation and object control skills.

Abu al-Hunud explained that this robot is intended to help teachers, as it can read, explain, motivate students and sense the students’ different feelings while trying to improve their moods.

Eighth-grade student Lamar al-Gharbawi, who took part in building the robot, told Al-Monitor, “My participation in the creation of this robot is the best thing that has ever happened to me.” She said that along with five other students and with the help of qualified engineers, they managed to develop this robot. “We grew much attached to it, and we consider it as one of our school teachers.”

The Elite Modern School is one of the few schools in the besieged enclave that teaches future sciences such as software and electronic mechanics.

Abu al-Hunud said that work on the humanoid robot began about a year ago based on French experiences that heavily rely on artificial intelligence in this field.

He said that the team that supervised the creation of this robot was in constant contact with a team of French consultants to obtain their expertise in this field.

Over the past three years, Elite Modern students have had the chance to build several nonspeaking sumo robots. These robots are set to participate in the school's robot sports tournament at the end of this year.

Abu Al-Hunud added, “This tournament, which will be organized for the first time in Palestine, will be attended by 16 robots built by 52 students from the school, and they are robots dedicated to combat competition.”

School director Diana Skaik told Al-Monitor that her school is the first educational institution in Gaza and Arab countries to build such a self-financed humanoid robot offering several advantages. Chief among these is its reliance on artificial intelligence as well as its ability to execute many commands through a tablet that remotely controls it, she explained.

Skaik indicated that the invention of this robot “has promised us a great future for our children, as robots will be the companion of man during the coming years and will help people complete their work and functional tasks, so we must prepare our children to deal with that.”

She noted that Israel’s policy of preventing the entry of electronic equipment and technologies into the Gaza Strip prevented the team from obtaining parts and equipment needed to create the robot such as advanced electronic panels, routers, receivers and transmitters. The team had to manufacture lower-quality versions locally.

The school recently launched a program called Future Skills to set the stage for children from the preparatory stage outside the school to join a summer camp dedicated to teaching application software and robotics. The students hope to participate in international exhibitions dedicated to robots and international sports tournaments dedicated to sumo robots to represent the state of Palestine before the world.

The Gaza Strip, which has been besieged by Israel since 2007, has an interesting experience that emerged over the past few years in the manufacture of robots in various fields.

In July 2021, engineers built a robot designed to deal with fires and unexploded missiles fired by the Israeli army during the recent wars on Gaza. This multipurpose robot uses a front shovel to get rid of obstacles and is equipped with a water hose to extinguish fires. It can also carry explosive objects from one place to another.

Ahmed Moqbel, director of the Shuaa Foundation for Science and Technologies that created this robot, told Al-Monitor that the robot can work both with wires and wirelessly to a range of up to 100 meters. He explained that the robot helps protect the lives of firefighters during Israeli wars, as it can deal with fires or places where there are unexploded missiles, adding that his organization is currently working on building many similar robots to deal with fires and enter dangerous places.

According to a report published by The Daily Beast on June 25, Israel resorted to the use of robots for military purposes in the context of the Palestinian-Israeli conflict, as it deployed heavily armed robots along the border with the Gaza Strip to prevent people from breaching the border fence.

The report stated that these six-wheeled robots are equipped with a loudspeaker for warning border violators, and in the event of noncompliance, it has the ability to confront them with a machine gun it is equipped with.