Palestinian youth hope reconciliation will compensate for the dreams they lost as a result of the 10-year-long internal division. 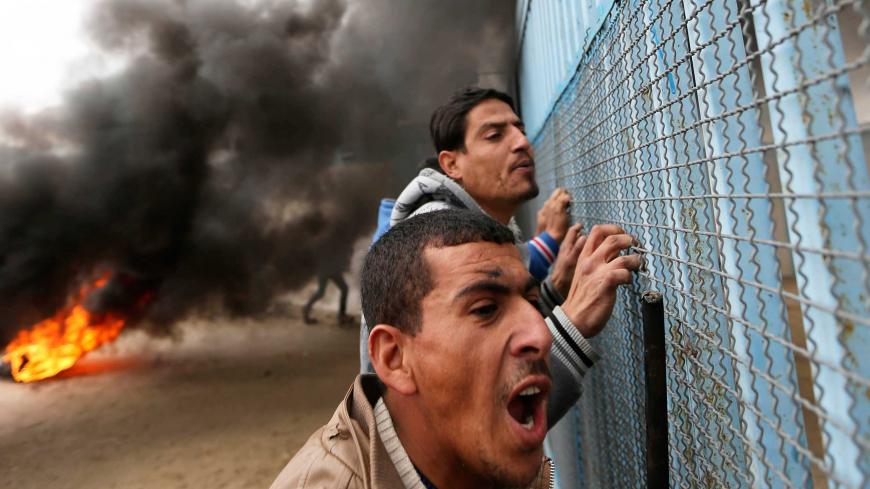 Back in June 2007, Palestinian Ihab Abu Armanah, 18, was taking his national high school exams, the “tawjihi,” at the Nuseirat refugee camp in the central Gaza Strip amid an exchange of fire between Hamas and Fatah gunmen.

On June 14, 2007, Hamas took over Gaza, and the geographical division turned into a deep political division that resulted in clashes.

Today, a decade later, the two Palestinian rival movements are exerting ambitious efforts to ensure the success of the reconciliation agreement reached on Oct. 12 in Cairo. But for Abu Armanah, the Hamas-Fatah reconciliation, which aims at handing over control of Gaza back to the Fatah-led Palestinian Authority, is meaningless.

Like most of his generation in the Gaza Strip, Abu Armanah was unable to pursue his academic studies or achieve his future plans under a 10-year-long siege imposed by Israel and Egypt on the Hamas-ruled Gaza Strip. He told Al-Monitor, “I was worried and terrified. I made sure to finish all of my exams in just half an hour and to run back home.”

Abu Armanah, now 28 years old, did not score good results in his tawjihi exam and was unable to achieve his dream of entering the department of English language, literature and simultaneous interpretation at Al-Azhar University. Today he is unemployed, single and living with his parents in a modest home in the Nuseirat refugee camp.

“I feel I wasted years of my life. I am not the only one, as all people of my generation feel the same. We grew up in times of division and war, and we were denied joy and stability,” he said.

According to statistics from the Palestinian Central Bureau of Statistics (PCBS) issued on Aug. 12, 2016, young people between the ages of 15 and 29 represent 30% of the total Palestinian population. This means that 30% of Palestine’s population grew up with the events of the division between the two movements, news of partisan rivalries and the sounds of war.

Just like Abu Armanah, all these young people hoped the division would end one day and believed they would be compensated for everything they had gone through. But the much-awaited reconciliation was long overdue.

On Oct. 4, Abu Armanah attended along with hundreds of young people a meeting with Prime Minister Rami Hamdallah at Mashtal Hotel. At the meeting, the prime minister was hammered by the youth’s questions.

On her Facebook page, young lawyer and rights activist Fatma Ashour had launched a campaign on Sept. 29 calling on the prime minister to meet with Palestinian youth and listen to their concerns. But it seems that many of those who attended the meeting did not come out with a positive impression.

Ashour told Al-Monitor, “I asked him about the plan to promote the participation of young people in political life and improve their situation by fighting corruption and cronyism, but he did not answer my question.”

Abu Armanah’s outburst at the meeting was noteworthy. Video footage went viral, showing him screaming, demanding Hamdallah give back young Gazans their rights and rekindling the dreams they lost during the years of division. “For 11 years we have been told to shut up. Shut up! Shut up! We want to talk,” he shouted.

He, later on, told Al-Monitor there were attempts to prevent him from speaking during the meeting.

However, Abu Armanah seems optimistic, arguing that he believes in the prime minister's ability to change the situation of young people for the better. “If anyone can do something, it’s him. He is the prime minister,” he said.

Local news websites quoted Hamdallah at the meeting as saying, “The youth in Palestine have proven themselves in all fields and accomplished exceptional achievements abroad.” The prime minister also announced that a development bank will be established to extend soft loans without interest to help the youth.

The Ramallah government faces great challenges in the Gaza Strip. The unemployment rate in the besieged enclave has reached an astounding 41.7% during 2016, according to the PCBS.

For Gazan blogger Mohammed Sheikh Yusuf, the world has been frozen in time throughout the division years. He was 19 years old when it all started. “In addition to the ensuing social, political, economic and national predicament, the 10-year split has also caused me personal life difficulties. I was arrested several times by Hamas security forces for taking part in protests calling to end the division,” he said. Yusuf is now settled in Qatar, where he says he can plan his life for five years to come, while in Gaza he was unable to make even a five-hour plan.

He did not expect significant changes in the situation of the youths during the first two years. “The focus will be on the political and security aspects, restructuring and centralization in Gaza. This will not include youth-related issues,” he said

Yusuf added, “The prime minister showed reservations in answering the questions of the youths at the meeting. His hands are tied, and he is unable to meet their high expectations.”

The siege imposed on the Gaza Strip since 2007 and the aftermath of three wars have left their mark on the economic structure, have reduced production and employment opportunities, have caused the continuous closure of crossings and borders, have increased poverty, and have generated multiple crises.

Gazan youth activist Amer Balousha, 25, told Al-Monitor, “I do not remember a day during which we had uninterrupted electrical power. I have never traveled, and my studies were very difficult.”

Questioning the Ramallah government’s ability to solve the problems of Gaza’s youth, he said, “Our problems are not limited or linked to a specific person or decision. Solving all of our problems requires a collective will.”

Abu Armanah had a dream — to study English — 10 years ago. He now promised himself that when reconciliation takes effect and the situation improves, he would rush to apply to study English at Al-Azhar University.

While young Palestinians believe meetings with politicians will be the beginning of change in their lives, politicians see the meetings as mere platforms to declare positions, announce intentions and make promises.