Al-Monitor spoke with Hussein Murtaja from Gaza City who was selected by UN Secretary-General Ban Ki-moon on International Youth Day to be part of the expert advisory team for a study about youth, security and peace. 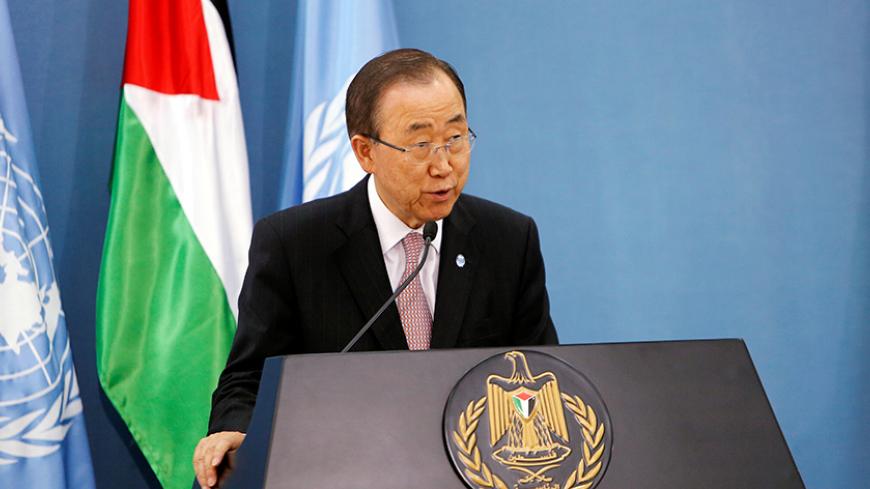 GAZA CITY, Gaza Strip — On International Youth Day, which is celebrated annually on Aug. 12, UN Secretary-General Ban Ki-moon chose Palestinian youth Hussein Murtaja from Gaza City to be part of the Advisory Group of Experts for Progress Study on Youth, Peace and Security.

In 2009, the Youth Advisory Board affiliated with UN-Habitat and concerned with urbanization and urban development was launched. This year on Aug. 12, the Advisory Group of Experts was formed and comprised of a youth advisory team affiliated with the United Nations. This group includes 21 youth experts who work in the framework of a project put forth by Jordan in December 2015, with the aim of finding a new role the youth can play in peace and security building.

Murtaja holds a bachelor’s degree in engineering and a degree in applied business; he is also the recipient of the Erasmus Mundus student exchange scholarship. He is a youth and social activist who has worked as the coordinator of several projects, such as the Palestine Model UN 2012 (PalMUN 2012). He has represented Palestine at several conferences and international and local events. He is also a spokesman for victims of war and armed conflict.

In 2008, Murtaja founded, with a group of friends, the youth group Rasail (Messages) that became a UN partner in the Committee on the Exercise of the Inalienable Rights of the Palestinian People. The Youth Letters program aims to raise awareness among the youth about the UN’s role, and to provide financial support for economic empowerment projects dedicated to Gaza’s youth. The group also conducted volunteer work, and local and international projects.

In an interview with Al-Monitor, Murtaja speaks about representing the Arab world in the Advisory Group of Experts.

Al-Monitor:  Where did the idea of the UN Advisory Group of Experts come from?

Murtaja:  In 2015, I submitted my candidacy to become a member of the UN-Habitat Youth Advisory Board concerned with urbanization and urban development. I received the highest number of votes to represent the Arab region [in the board], along with my colleague Maria Dayfallah from Algeria. [This year], I was selected as part of an expert committee that would be [a prelude] for a youth advisory group, also affiliated with the UN. The idea [of the Advisory Group of Experts] was submitted by Jordan to the UN Security Council on Sept. 9, 2015, to give the youth a new role in peacemaking and instilling security and to explore the different ways of increasing comprehensive youth representation in decision-making processes. The aim is to prevent the outbreak of conflicts and to resolve existing ones under the headline “Youth, Peace and Security.” This project is the first of its kind in the world.

Al-Monitor:  What was the mechanism of candidacy for the Youth Advisory Board?

Murtaja:  The candidacy and appointment were done online. The final list included 90 young people, 21 of whom were chosen to be part of the Youth Advisory Board headed by Graeme Simpson who is also the director of Interpeace USA. There were five Arab members [including myself] among them hailing from unstable regions of conflict — such as Farea al-Muslimi from Yemen, Ikram bin Said from Tunisia, Hajer Sherif from Libya and Salim Salama from Syria. I received the highest percentage of votes, as 92,000 people from around the world nominated me. I currently represent the Arab region.

Al-Monitor:  What are the competition and selection criteria to join the Youth Advisory Board?

Murtaja:  The candidates should be active in their country in youth-related issues and must support development projects. A few years back, I established a youth group under the name Rasail for economic empowerment of youth in Gaza and for the development of their cultural skills and dialogue abilities to bridge the political division gap in Palestine. I was a victim of this division, as I was injured in the head by a ricochet in the tragic incidents between Fatah and Hamas in 2006. I had to remain in intensive care for a period of time until I got back on my feet. Although I was wounded and I quit studying for a while, I kept thinking about cultural and economic projects to help the Palestinian youth. I submitted a project to the UN — the PalMUN conference in 2012. The idea stemmed from the need of the Palestinian youth to know the UN role in Palestine and the decision-making mechanism. We wanted the voice of the Palestinian youth to reach the world; 300 young men and women participated in the conference, which was a success. We are thinking of holding a new conference soon.

Al-Monitor:  Is there a certain program you plan to submit this year to the UN in the framework of the Advisory Group of Experts?

Murtaja:  I am working on an integrated program, and I will submit a study about youth, peace and security to the UN. The study will include economic and cultural projects, as there are 73 million unemployed youths in the world. The UN will then support youth recruitment and employment projects to curb poverty, empower youth in the fields of education and knowledge and establish emerging companies for youth submitting development projects. With this, the suggested project will raise the youth’s awareness, empower them, and develop their skills and talents. We will try to provide the UN with accurate statistical data about the situation of youth in the Arab world — especially Palestine.

Al-Monitor:  What are you trying to achieve with your team?

Murtaja:  As a young man, I am interested in the stability of the Arab world. At 25, young people find themselves unemployed or without any role in life. They are unable to stand out. On the contrary, they are ready to be lured by any political party or ideology, be it good or bad. The void and polarization have fueled violence and led to the emergence of youth espousing radical ideas in the Arab world in general. The solution is to feel the youth's situation at home, share their concerns, open horizons in the technology field for them, help them find job opportunities in the world and involve them in global development and crisis management. We will base our choice of projects with the UN on the above. In the upcoming years, this generation will be able to instill peace in its society.

Al-Monitor:  What are your priorities for Palestine through the group?

Murtaja:  The most important thing is for the Palestinian youth to know their rights and duties through the UN institutions. There are many UN resolutions that serve the Palestinian youth. We are working on raising their awareness about their rights and duties and we are communicating with the less fortunate also. On behalf of the Rasail group, I visit 200 families in need, and I am aware of the tough situation that people in Palestine are facing, especially the youth. But there are good things in this world. It is not all about unemployment, poverty and power cuts. I will work on forming a wider youth team in Palestine to promote awareness initiatives and train the young people in diplomacy and civilized dialogue. The volunteer team included 13 people at first, and 10 members traveled to widen our reach abroad.

Al-Monitor:  Will you work from the Gaza Strip or from abroad?

Murtaja:  The work will be done in and outside Gaza. I should submit the project in coordination with Arab countries, other than Palestine. We will form a private Palestinian committee to present real statistics and surveys as well as economic empowerment projects for young Palestinians. We will have direct contact with the youth, and we will not rely on the Palestinian centers’ surveys, but on our own field youth experience.

Al-Monitor:  Did any Palestinian political party try to hinder your work, or make you offers? And why?

Murtaja:  The government’s security authorities have banned some [of my] cultural and awareness activities in Gaza, as [these activities] were not licensed. Some projects were also stopped because those security services did not understand the true nature [and meaning] of such activities.

About offers, no one cares about us on the official Palestinian level. I am saddened about the clear neglect of the official Palestinian authorities of the importance this UN team [Youth Advisory Board] enjoys. The team has already launched 150 small projects within the framework of the [Deprived Families] Economic Empowerment Programme and funded by the UNDP institutions. As for political parties, I do not represent any [party]; my only goal [focuses] on Palestinian youth.

Al-Monitor:  What are the main obstacles that you are facing?

Murtaja:  In the past, I traveled to represent Palestine in international conferences in Jordan, the United Arab Emirates and Turkey. I was banned several times from traveling to represent Palestine at international conferences and UN youth sessions due to the [Gaza] siege. A meeting for the Youth Advisory Board will be held in October 2016 and another meeting in February 2017. I hope I will be able to travel to join the youth board and start implementing approved decisions and activities.