Israel fears that a Palestinian unity government would actually allow Hamas to preserve its armed forces. 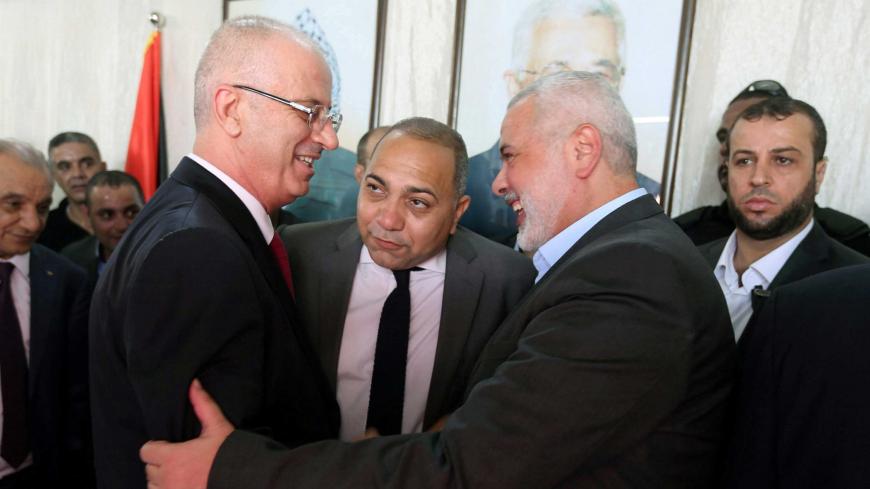 After the failure of former US Secretary of State John Kerry’s mission in 2014, to the great dismay of the Obama administration, Palestinian President Mahmoud Abbas established a national unity government with Hamas. Visiting Ramallah these days one gets a sense of deja vu. In the Fatah movement there is no love lost for Hamas — it is still the archenemy. Hamas wants the Palestinian Authority to spend more resources in the Gaza Strip; Abbas wants to curb this support. Yet these two parties declared Oct. 3 the establishment of a national unity government.

Egyptian President Abdel Fattah al-Sisi and his administration are now in favor of Palestinian unity. If it is up to Cairo, a national unity government with the participation of the two rival factions will be operating sooner rather than later, and with their protege former Fatah senior official Mohammed Dahlan pulling the strings. Such a move could actually close the window of opportunity for any US peace effort. At the same time, there is little belief anywhere on the Arab side in such an effort.

A senior PLO official close to Abbas told Al-Monitor that today a majority within the Fatah movement supports such a national unity move for a variety of reasons.

In fact, US President Donald Trump's reluctance to move ahead on a two-state solution process is one of these reasons. This lack of hope on the political horizon has pushed Fatah into Hamas’ direction. And there is more. The Palestinians have little hope for any policy move on the part of the European Union. French President Emmanuel Macron chose not to follow in the footsteps of his predecessor Francois Hollande, and will not convene a continuation of the Paris Middle East peace conference. And so, West Bank public opinion is radicalizing. And while Palestinians feel despair over the diplomatic stalemate, Abbas perceives the economic crises in the Gaza Strip as an opportunity to strengthen his foothold in Gaza.

Adding to these reasons is strong Egyptian pressure for such a move, which is viewed by Cairo as a way to stabilize the situation in the Gaza Strip. It is not only the question of pacifying its border with Gaza; Egypt would also prefer to avoid another round of violence between Hamas and Israel. Still, despite its efforts for reconciliation, Cairo keeps pushing Dahlan to center stage, knowing all the while that rapprochement with him would be resisted by Abbas.

The PLO official explained that a move toward a national unity agreement could give birth to more radical Palestinian policies vis-a-vis Israel and the international community. According to the official, it may also inspire more waves of violence and terror in the coming months.

The official outlined the nature of this new national unity agreement: There will be one government for the West Bank and Gaza led by current Palestinian Prime Minister Rami Hamdallah, under the presidency of Abbas. The government will de facto allow Hamas to continue to operate its military wing. The Gaza Strip will be run in a way similar to that of Lebanon, with a civilian government alongside a fundamentalist armed group, a la Hezbollah. In the case of the Palestinians, Egypt will have most clout over this regime.

A senior Israeli Foreign Ministry official told Al-Monitor on condition of anonymity that Jerusalem is well aware of this eventuality and will not be surprised by such developments. Israeli Prime Minister Benjamin Netanyahu has already warned US President Donald Trump that such Palestinian unity that includes a terror organization is under no circumstances a partner to any negotiations. According to the official, Israel is preparing its reaction to such a move on three levels: a worldwide public relations campaign against a Palestinian terrorist government with links to Iran; ending all contacts on the renewal of a peace process; and stronger security measures vis-a-vis the West Bank and the prevention of terror.

Reacting to the Israeli warnings, the senior PLO official told Al-Monitor that such remarks combined with the continuous settlement construction policy throw Fatah and Hamas into each other's arms.

Given these assessments on both sides, it is important to note that there is still a small opportunity to prevent such a move. In a way, the ball is in the American court now; the US peace team must come forward with a realistic two-state solution initiative.