Can animated film sensitize Israelis to suffering in Gaza?

A human rights organization has produced a short animated film about a girl in a candy factory to explain the conditions in Gaza caused by the blockade. 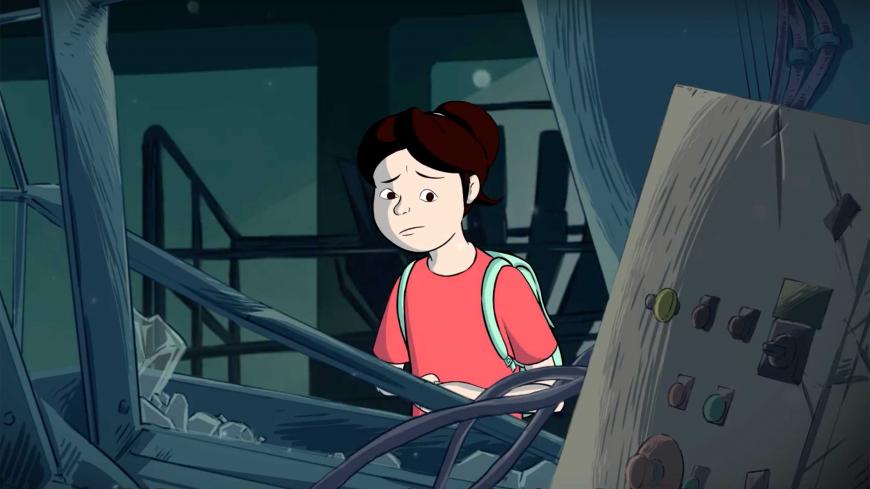 A still from the animated short "Gaza's Candy Kingdom."

Human rights organization Gisha has found an original way to inform Israelis about the distress and hardships of factory owners in the Gaza Strip. In partnership with the sweets manufacturer Al-Awda (The Return), it produced an animated short film titled “Gaza’s Candy Kingdom.” Thus, the organization that works for the freedom of movement of Palestinians in the West Bank and especially in the Gaza Strip, which is often subjected to closure, hopes to crack the wall of indifference among Israelis about what is happening an hour and a half drive from Tel Aviv.

In the film, a girl named Noor (which means “light” in Arabic) finds a 10 shekel coin (about $2.85) while on the way home from school. With glee, she goes to buy an ice cream cone and wins a ticket to visit the large sweets factory owned by Muhammad Tilbani, who greets her with open arms.

“I don’t know if you know,” he tells the surprised little girl, “but I decided to give you the whole factory as a gift.” During a tour of his factory, she is exposed to the impossible task of manufacturing in Gaza — that is, running a factory under the conditions of closure, war and the lack of a reliable supply of electricity, which has caused the factory to abandon modern technology and return to the days of the 19th-century Industrial Revolution.

Tilbani is a real person. He has owned Al-Awda for 40 years. “Two years ago, Gisha, with whom I worked for years, approached me and suggested making a film centered on my factory. I agreed immediately,” he told Al-Monitor. According to Tilbani, he knew that other factory owners in Gaza, who experienced a similar struggle for survival, would reject the offer out of fear of incurring even greater economic disaster in the form of retaliation by Israel.

“I said, what do I have to fear? It’s all true,” Tilbani recalled. “If there’s one lie here, take me to court. Everything [in the video] is true to life, from our reality in Gaza, managing a factory and maintaining the livelihood of our workers.”

According to Tilbani, Israeli businessmen with whom he trades have reproached him, claiming that the animated film based on his character and focused on his factory damages the image of Israel. Tilbani told them that the film shows only a small part of the suffering experienced by every factory owner in Gaza, small and large, and that he, like his colleagues, has struggled for a decade to continue to earn a living and to provide a living for others.

In the film, Tilbani asks Noor, “Shall we go on the tour?” She jumps for joy. As they stand by the elevator, the light goes out, and they have to take the stairs. “I’m sorry, it’s that time of the day,” he tells her. “In another eight hours, the electricity will return.” Later, Tilbani shows Noor a machine that had stopped working and was simply pushed aside, because there is no way to get replacement parts into Gaza. At another point he explains to her, “Here is where the packing machine was supposed to be, but it’s been stuck for months in a port in Israel. They [the Israelis] don’t allow such machines to enter Gaza.”

“I’m not opposed to security,” Tilbani told Al-Monitor, “Let them check with all the means possible, but be logical. A part of my machine broke, and the factory abroad [that makes it] shipped me the part I need. Your security checked it and finally released it from the port. After that, they asked where am I’m going to put the part, so I photographed the machine and sent the photo with an explanation. Finally they told me to come to the Erez crossing and get the part. The night before, they called and said, ‘Don’t come. There’s no authorization.’ But it’s an air compressor that operates the whole factory. What am I supposed to do?”

Tilbani worked as a laborer in Israel in his youth and saved his money. In 1977, he opened Al-Awda as a small business from his home and grew it into a factory that employs 400 workers who make sweets and ice cream. He says his products are inexpensive and are meant for Gaza residents who can’t afford to buy sweets that cost more than a shekel (29 cents) or even less.

Before the Gaza closure, introduced in 2007, Tilbani exported 65% of his products to the West Bank. For a decade now, he hasn't been able to export products, but he has also not laid off a single worker.

“How can I lay off a worker who works for me and earns a living for his family?” he said. “If I fire him, that would send him off to die of hunger. What would happen to his children? I can’t sentence a worker of mine to death.” Tilbani therefore made the decision to employ every worker for half a month, so that everyone could continue to earn money. His employees earn between 400 and 1,000 shekels ($114 to $285) a month. The factory hangs on, with great difficulty given the low demand for his products in Gaza, where most residents don't even dream of buying sweets.

“There are kids here whose dad can’t give them half a shekel to buy a sweet,” Tilbani said. “In Gaza, there are hundreds of thousands of people who have nothing to eat, who haven’t seen meat for many, many years, except maybe for [the Muslim holiday of] Eid al-Adha.” Tilbani occasionally invites people for dinner at his home, and 20 other people come whom he didn’t invite. “Could I send them home?” he asked. “At the end of the meal, they take the leftovers to give to their kids.”

Tilbani gives 2.5% of the profits from his factory to charity, and on Ramadan he hosts a meal for 3,000 Palestinians for whom it will be the only big meal that includes meat for the whole year.

“Gaza’s Candy Kingdom” tries to project optimism. Toward the end, Noor looks out of the factory window and sees bulldozers. Tilbani explains that part of the factory was bombed in 2014, during Operation Protective Edge, and proclaims, “But we’ll rebuild everything.” Noor decides to pass on the prize of owning the factory and offers that instead she’d be happy with free ice cream for life. Tilbani comforts her, saying, “As long as people need ice cream, we’ll be here to make it, in order to make their life sweet.”