The sweet delights of Damascus, from cookies to pistachio-covered ice cream, are now available on Beirut's Hamra street, but not all of Lebanon is nuts about the Syrian offerings. 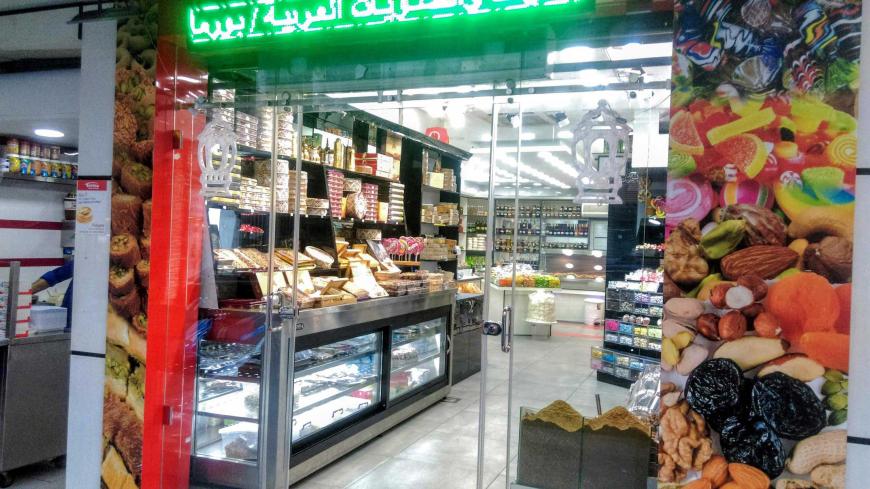 Pedestrians on Beirut’s Hamra Street slow at the sound of something being battered. As they get closer, they find that the sound is coming from a Syrian ice cream parlor called Fasatoq wa Bunuduq — "Pistachio and Nut" in Arabic — where traditional Damascus ice cream is pounded with a huge hammer.

Behind the counter, Butros pounds the milky ice cream in an icy metal container while in front of the store Hassan urges a group of Iraqi passers-by to taste the Damascene sweets, nuts or pistachio-covered ice cream, just like the ones found in the legendary Bakdash ice cream parlor in the old city of Damascus.

Over the past year, many Syrian confectioneries with colorful windows and sellers out front have sprung up like mushrooms in the Hamra neighborhood. It started with a few peddlers who fled the war in Syria for Lebanon making a living in Beirut by selling nuts. One of them was Elias Khoury, who eventually set up his small open-air stand by the wall of a parking lot on Hamra Street.

Khoury’s journey from Syria to Lebanon was far from happy. When the war in Syria broke out, he sold his grocery shop and decided to go to Brazil, where his brother lived. He used up all the money he had for the trip, but stayed there less than a year.

“I was unable to cope with the conditions in Brazil” and came to Beirut, he said. “I did not imagine myself being a peddler at this age in Beirut. I do not have any plans for the next phase; I think I will just keep selling nuts and candy here.”

So he is now a permanent fixture on the street, his goods divided into sealed nylon bags. Sometimes, he opens one of them and offers potential customers some nuts to taste in the hope that they will buy a bag.

“You have to be generous in the catering business,” agreed the owner as he offered barazek, traditional Syrian sesame cookies, to passersby. Like many of the people interviewed, he refused to give his name to Al-Monitor.

“There is a variety of consumer behavior in this business. Europeans purchase small quantities as gifts, while Arabs buy large quantities. The Lebanese buy in small quantities but often, and Syrians who are unable to go to Syria enter our shop just to feel like being in Damascus,” said Hassan, the salesman at Pistachio and Nut.

“I was a banker with a master’s degree in business administration. Now I am selling confectionery,” Hassan told Al-Monitor. “My competency in English helped me get this job as it allows me to serve foreign people.”

Hassan said he needed to stay in Beirut for a few more years so that he can save enough money to pay his military service allowance. He's confident because Pistachio and Nuts is doing well. Then he hopes to get back home to Damascus, “[All of us] just want to go back to our country.”

Not all the Damascene confectioneries are as confident about the future of the business. The salesman at Ayamek ya Sham — "Best Days of Damascus" in Arabic — mused, “We brought these stores to Beirut. They are competing with local nuts stores and roasted coffee bean shops." Then he abruptly stopped talking.

All the Syrians working in Best Days of Damascus declined to give an interview and apologized for not being able to discuss their current situation or reveal further information. The Syrian workers in the Taybat al Sham ("Damascus Tastes") also refused to be interviewed. Indeed, most of the Syrians on the Hamra street are reluctant to talk to a journalist, let alone give their full name, the date they entered Lebanon or when they first started the business, fearing to draw attention that may bring legal problems or a public reaction among the Lebanese who think the Syrians are robbing them of jobs.

George Ghali, the executive director of Act for Human Rights in Lebanon, told Al-Monitor, “All Syrians regardless of their legal status in Lebanon are subject to the same conditions of employment for foreigners, because Lebanon does not recognize them as refugees.”

Ghali believes that there is a feeling of resentment among the Lebanese because they think the Syrian newcomers, who operate in a legal gray area, ignore the laws, while the Lebanese have to abide by them.

Many Lebanese perceive that the complicated situation created by the humanitarian crisis in Syria, the legal gaps and lack of law enforcement make it relatively easier for Syrians evade the law. But others say the idea that the Syrians have an easier time or that they pose a threat to Lebanese business is untrue.

Wissam Al-Halabi, a lawyer specialized in civil and commercial law, told Al-Monitor that like any foreigners working in Lebanon, Syrians are obliged to receive prior authorization from the Lebanese Ministry of Labor to open the shop and then they must obtain a work permit.

“The procedure is not difficult,” said Halabi. “The offenders may face provisions, which may lead to the closure of shops, and sometimes to detention as well as to the confiscation of the property.

Lebanese patron Jana brushed aside claims of unfair competition, emphasizing the uniqueness of the nature of the business. "Since there are no similar Lebanese shops to compete with these Syrian shops, how could these stores pose a threat to the interests of the Lebanese, especially as they foster the oriental identity of Beirut?” she told Al-Monitor.

Her Syrian friend Tala added, “Damascene works; mosaics, motif fabrics, confectionery and so many other traditional practices related to heritage could be shared and presented to all of Beirut's visitors, by both Syrian and Lebanese descendants. The antique shops in Damascus are suffering now. It would be a good idea if Syrian heritage could be promoted in Lebanon, since people can't visit Syria these days.”

Mohamad, another salesman in Hamra, who followed in his grandfather steps to selling Syrian sweets, is not very optimistic about the future of the Damascene sweet business. Sitting in front of his store, he expressed disillusionment over the swiftly multiplying shops.

“I regret leaving Germany and coming to Lebanon. … Sales have decreased after many sweet and nut shops popped up in Hamra.”