Kanafeh, a Middle Eastern sweet that has its roots in Turkey, has found its way via Palestine to Jordan, where despite the influx of Syrian refugees and a struggling economy pastry shops are thriving. 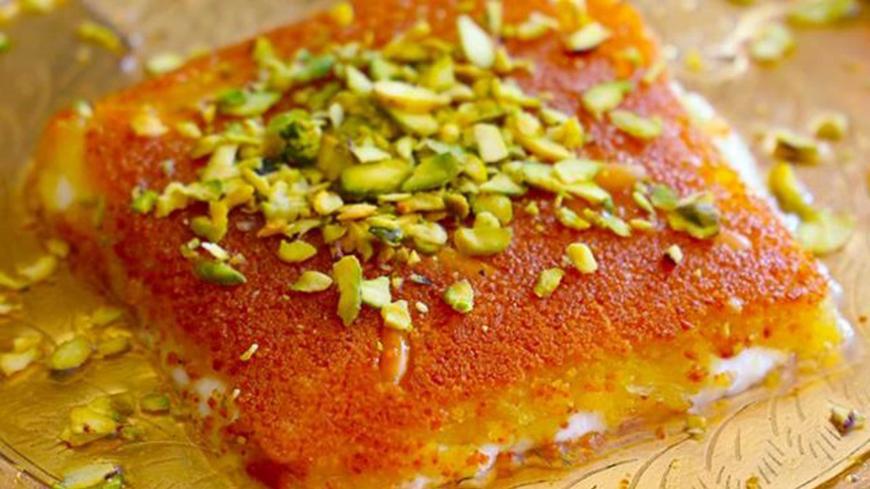 AMMAN, Jordan — When Mohammad Qutaishat, the director of the Jordan Media Commission, received a letter from the prime minister’s office Oct. 24  that renewed his appointment, he did what most people in his position would do: He ordered two large trays of kanafeh for the entire office.

Kanafeh, a popular Levantine sweet, is often consumed in Palestine and the Middle East to celebrate a wedding, birth, family feast, graduation, promotion or the first salary of a newly employed young person. Some sources claim kanafeh originated in southeastern Turkey, while others suggest Istanbul; still others claim the sweet originated in Nablus, Palestine, as early as the 10th century.

Kanafeh — made of wheat, cheese, ghee, rose water and sugar — is different from many of the other Middle Eastern sweets because its ingredients include cheese. As it is served hot, the cheese melts and adds a slightly salty taste to the sweetness.

The sweet is almost exclusively produced in family-owned pastry shops, such as Al-Aker, Shanteer, Arafat, Jafar in Jerusalem, and many have become famous brand names throughout Palestine, Jordan and the Middle East.

While pastry shops take orders for large trays of kanafeh for family and public events, most of the sweets are sold in smaller quantities. In Beirut, kanafeh is often stuffed in a piece of bread covered with sesame seeds and eaten on the go.

Habibah Sweets, founded in 1951 by Mahmoud Habibah, is one of Jordan’s icons when it comes to kanafeh. Habibah started his trade in Nablus in the early 1940s, before he moved to Jerusalem in 1947. He then settled in downtown Amman and, a few years later, opened a small store next to the Arab Bank in the center of the Jordanian capital.

Hani Habibah, Mahmoud’s son and the current CEO of Habibah Sweets, talked with Al-Monitor about the family's journey that made it a household name. “I am proud of the fact that generations growing up in Amman and Jordan have become so accustomed to Habibah’s kanafeh that wherever they have settled, when they return to their hometown they always stop by Habibah’s for a plate of hot kanafeh.”

Habibah said that kanafeh in Jordan has had a "unifying cultural role" that complements mansaf, the national dish made of rice, lamb and hot yogurt. “Everyone knows that the Jordanian main national meal is mansaf, but people buy kanafeh for dessert to complement the main dish,” he said.

He noted that the recipe of the sweet dessert has undergone changes over the years, saying, “We now have both thick- and thin-crusted kanafeh. The original is the thick topping that used to be called 'Istanbulieh' — a reference to the Turkish city of Istanbul.”

According to Habibah, with time a thinner crust became more popular because it is softer on the palate. “In the past, we would sell 90% thick and 10% thin kanafeh, but now the numbers are nearly reversed with more than 60% of the customers preferring the thin version.The thin kanafeh takes more time and care to prepare but it has become more popular,” he said.

Customers can also buy the ingredients from Habibah Sweets. Habibah said that good-quality ghee and cheese are crucial in making tasty kanafeh, and that the hard part is to make it both crisp and succulent. The dough is laid out at the bottom of a round, circular tray that is placed in a gas oven. Once baked, it is turned over and sprinkled with rose water syrup and crushed pistachios.

Habibah refuses to use any food coloring in the kanafeh recipe. “The reddish color that kanafeh is famous for comes from natural ingredients,” he said, boasting that his family's insistence on rejecting food coloring has now become a standard, following the Jordanian Ministry of Health’s banning of food coloring for all sweets.

Habibah has served Jordanians who have welcomed over the years refugees from Palestine, Lebanon, Kuwait and Iraq. However, the latest wave of Syrian refugees has had an impact on the economy. “This latest wave of Syrian refugees has negatively affected the national economy and along with the violent conflicts around us has caused a decrease in regional tourism by as much as 30%,” he said.

Regardless of the economic effects of the Syrian refugee crisis, new sweet shops have opened with a clear focus on the Levant and Syria that are popular and financially successful.

The most popular of the new sweet shops in Amman is Nafeeseh, a Jordanian sweet shop that, according to its Facebook page, creates authentic Levantine/Syrian flavored sweets, with pistachios, cashews or "special Arabian cream and cheese."

Ahmad Salah, the head of staff recruitment at Nafeeseh, told Al-Monitor that the Jordanian sweet shop owners are proud to employ Syrian refugees and assist them in obtaining a work permit. “We have an excellent relationship with Syrian refugees who work in the company’s six stores throughout Amman and are very productive.”