Omar Sartawi, a Jordanian chef with unorthodox practices, took Bedouin dried yogurt and made it into white chocolate truffles — but the jury is still out on its taste. 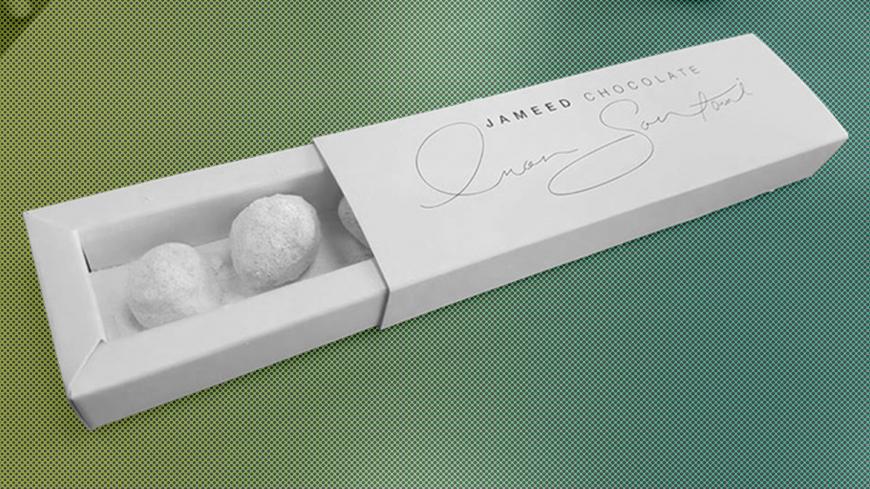 When Omar Sartawi, an unorthodox Jordanian chef, advertised his first Jameed Chocolate, round, white truffles with the salty taste of dried yogurt, many Jordanians thought he was joking.

Sartawi, with his partner Nadine Othman at White Design House, posted the chocolates on social media in January and the photos immediately went viral with reactions ranging from surprise to praise. “An absolutely distinctive combination that I love,” wrote Lina Asms.

Samer Abuqaoud, a young Jordanian, could only bring himself to taste the jameed-flavored chocolate with his eyes shut. As far as he was concerned, jameed, the salty dried yogurt made from goat’s milk, complemented not chocolates but the popular Jordanian dish mansaf, which is a mixture of lamb, bread and rice and is served on social occasions.

Undeterred by the sceptics, Sartawi told Al-Monitor, “We were thinking about developing Arab and Jordanian dishes, and that is how it all started. I consider myself lucky because I am part of a culture that has a diversified cuisine with the tastiest food in the world. I wanted to create a different perspective of our food. So I went with the jameed-flavored white chocolate idea. We took one of the [special tastes] in Jordanian gastronomic culture, jameed, and aimed to make it a dessert that can [become popular] in the West.”

Sartawi is a seasoned chef and owns a famous restaurant in Amman called Sandouk al-Ta’am. He also likes to “design food,” and co-owns a design company.

“I wanted to see how to use an ingredient that Jordanians like and accept but that is unknown to foreigners,” he said. “Then I wanted to create a twist that would make the same taste familiar to the foreigners and totally new for Jordanians.”

Sartawi spent three months working on the chocolate composition. He said, “Three months were enough to change my perspective of things. I found the solution ultimately and created a new and delicious flavor and recipe that includes jameed. Some people liked it, while others thought it was strange.

Eman Abuqaoud, a Jordanian journalist, described the jameed chocolate as “sweet and sour.” She said she was used to eating jameed in the mansaf dish, but her curiosity pushed her to try the new chocolate. “I liked how jameed — which has a high concentration of salt — was mixed with a high level of sugar and was served as dessert,” she told Al-Monitor. “I went with my cousin Samer to taste the new chocolate, but he could only bring himself to eat it with his eyes shut. The transformation of jameed into a chocolate ingredient was bizarre for him, but when he finally tasted it, he liked it.”

Abdul Karim al-Hawyan, the leader of a Bedouin tribe, rejected the combination outright. He told Al-Monitor, “Mansaf should not be touched, and jameed is a key ingredient in this dish, in addition to meat. It is a traditional and national dish that should not be messed with.” He refused to taste the new chocolate.

Sartawi noted, “I respect all people’s opinions, and at the end of the day people will say what they will. But I accept criticism. The chocolate was widely welcomed, and I am happy about it. I sent Jameed Chocolate to New York, Canada, France and Britain and to most Arab countries. I also sent it to the chocolate-renowned countries Belgium and Switzerland, and people were interested.”

He added, “I am happy to spread my culture to as many people as possible. We are trying to deliver this Jordanian product to the world. I believe in it, and I think we can give the world a taste of it.”

The Jameed Chocolate pack contains six pieces and costs $7, in the same price rage as upmarket chocolate. Curious Jordanians and foreigners rushed to the restaurant that Sartawi manages to buy this chocolate with a twist.

Fahmi al-Zohbi, an anthropologist at Yarmouk University and member of the Jordanian Anthropology Society, which studies the culture of communities, believes that developing popular food culture and spreading it to other countries encourages bridging cultures. He told Al-Monitor that if the exported food has a strong taste, it might be more difficult for others to accept it, as it may not fit with their gastronomic culture and palate. In such cases, he added, traditional food of a country often gets slightly changed on foreign soil.

Zohbi said, “Some people refused the use of jameed in chocolates because they are attached to their cultural symbols — whether these symbols are related to gastronomy or to national ideals. It is hard for Jordanians to accept this product because they are used to serving mansaf to their guests. But the product will be accepted in the West because of the difference of culture.”

Sartawi will not stop at jameed-flavored chocolate. He is determined to prepare new Oriental dishes with a different recipe to spread Arab cuisine in the West. But such a step requires months of experimentation to get the right portions of the new ingredients in the traditional dish.