To the delight of Americans, a taste of Turkey now sold close by

Specialty stores selling fresh lokum, or Turkish delight, are opening across the US, serving a variety of options for health-conscious candy lovers. 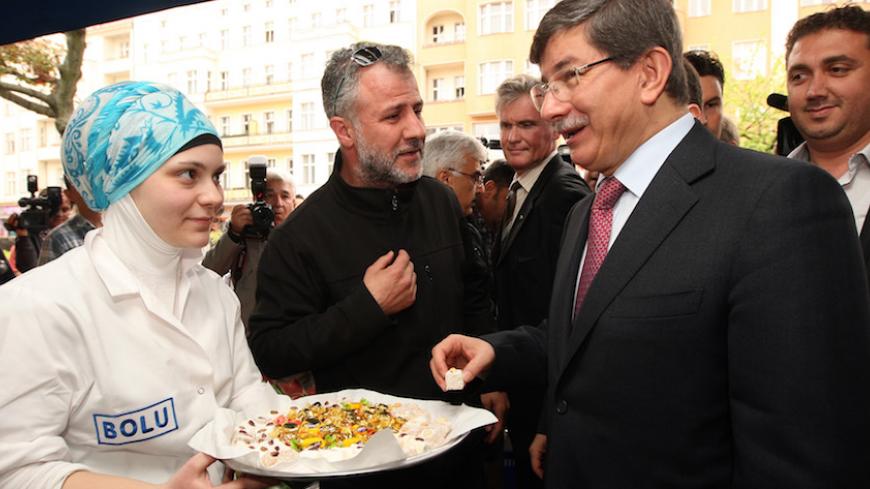 Ahmet Davutoglu (R) tries a piece of Turkish delight (lokum) as he visits members of the Turkish community in the Kreuzberg neighborhood in Berlin when he was Turkish foreign minister, May 11, 2013. - ADAM BERRY/AFP/Getty Images

One of Anatolian candy masters’ most globally famous inventions is "lokum," or Turkish delight. Although there are different legends as to how lokum was invented, most food historians agree it originated from the Ottoman palace. Some legends say it was created to help with the digestive system of gluttonous palace residents, whereas others claim the sultan demanded that a candy be developed to keep the peace in the harem among his wives. In the book "History of Turkish Desserts," the author explains that lokum as we know it today did not exist in the 17th century. Its original name was “rahatu’l-hulkum,” meaning “refreshing to the throat,” and was used for a sweet paste. Later, the term became "rahat lokum" and finally just "lokum."

While Westerners have wondered about the secret recipe of lokum for many centuries, it is composed of only a few main ingredients: starch, sugar, water and lemon juice. When sugar was introduced, it replaced honey or grape juice in lokum, and one of the world’s most versatile tastes was created.

With modern-day lokum, one's imagination is the limit. Only a simple mix of flavors obtained from fruit juice or spices are used, or the ingredients can be more elaborate to include nuts, saffron, chocolate, clotted cream, dairy-free nougat, rose petals or puffed rice. Thus, hundreds of different types of lokum can be created to cater to different taste buds, dietary restrictions and budgets.

Lokum sweets have traveled all over the world in the bags of merchants. By 1861, we can see from the magazine archives that the sweet had made it all the way into European culture. In Britain, for instance, it was called “lumps of delight” in the 19th century. In the Balkans and the Middle East, the sweet was eventually called lokum, and it became known as Turkish delight in the rest of the world.

However, to this day, European manufacturers have not been able to gain approval from Turkish candy connoisseurs. Although lokum can be created with different ingredients, the base ingredients are cheap and simple, yet the method of making it is laborious and requires years of experience. The candy masters say the secret is to mix it with the same speed patiently; mixing it too slow or too fast, or pausing, will result in the mixture crystallizing and becoming inedible. Mastery of lokum production in the age of technology is easier than what chefs endured in the 18th century. However, it is still necessary that the rolls (each about 15 inches in length) are made on a cold, and ideally marble, countertop to add the desired coating, after which they are ready to be transported all around the world. Fresh lokum is sliced with a sharp knife on a cold countertop and consumed within two to three weeks; those containing nuts can become rancid if not preserved properly.

How can one distinguish a good-quality piece of lokum? The experts say that if the base of the lokum is touched, it should not leave a mark, and the scent of a piece of lokum should clearly indicate what flavors have been used. In addition, the masters agree that a small bite of lokum should make one crave for more, just like in C.S. Lewis’ children’s classic "The Lion, the Witch, and the Wardrobe” or the film “Chronicles of Narnia,” where the young Edmund almost sells his soul to the White Queen for one more bite of Turkish delight.

Indeed, most Americans have been introduced to Turkish delight through this classic book, wondering what the mysterious dessert tastes like. Consumers searching their local stores for a taste of lokum end up buying a box of the unknown. The lokum is often stale with a bitter taste. For decades, the only way to taste good-quality lokum was to bring it from Turkey. In fact, during the first 10 months of 2015, lokum sales at Istanbul’s Ataturk International Airport broke a record at 990 tons.

This year, Loqhum opened in San Diego and Garden Grove, California, and has been making waves among candy aficionados. Loqhum only sells lokum sweets. Owner Turkay Hot told Al-Monitor that Loqhum has dealers in Houston as well as in Chicago. It is in the process of opening up new locations in San Francisco as well as in Los Angeles.

Al-Monitor visited the Garden Grove store near Anaheim on a Friday morning and found Hot and his Arabic-speaking assistant slicing different types of the candy. Trays of small pieces of lokum with toothpicks encouraged customers to try the variety of lokum available. Hot said, “We started with 65 different flavors of lokum, currently we offer 49 varieties. We try to explain to our customers what lokum is all about and also how they can develop their taste and preferences.”

Hot has the lokum rolls shipped from Istanbul weekly, and judging by the number of customers on an early Friday morning, it is obvious the sweets are popular and sales are good. He said that Turkish Airlines flights from Los Angeles to Istanbul have started offering lokum to passengers, which has helped the company's sales enormously.

All boxes are custom made, so customers can choose what varieties of lokum sweets they want in a box. “Lokum provides a healthier alternative for the guilty pleasure. If you have nut allergies, we have lokum without nuts. Most of our products do not use any food coloring. All of our products are dairy-free, even the ones with nougat,” Hot said.

Most varieties of lokum contain much less sugar than other candy. A customer told Al-Monitor, “I bought lokum for the first time in June from here to surprise my 8-year-old daughter. I have been coming back every week because now my child is eating walnut, almond, hazelnut or pistachios without a fuss. It is good for you. We now take it as gifts to friends and family as well.”

Lokum stores allow customers unfamiliar with lokum to discover the sweets, while longtime lokum lovers can reminiscence about the fond memories of eating lokum. Hot, the young and passionate Loqhum store owner, carefully listens to his customers' comments and requests. But it seems that even the most skeptical customer returns to Loqhum for a custom-made box after having tasted lokum sweets sold by other stores.