How did Gaza’s economic elite become day laborers in Israel?

Once-prosperous Gaza merchants, having depleted their savings and barely surviving, are using their entry permits into Israel to search for odd jobs. 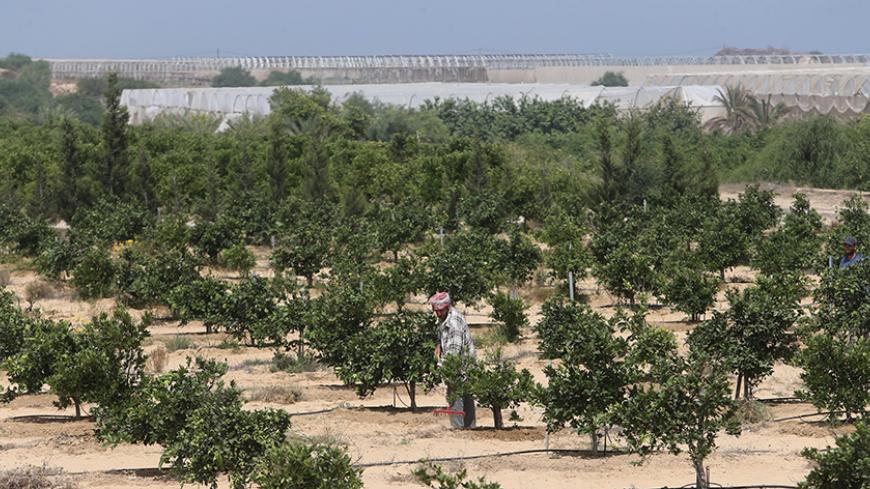 A Palestinian farmer works in a field at the former Jewish settlement of Neve Dekalim, in Khan Yunis in the southern Gaza Strip, Aug. 6, 2015. - REUTERS/Ibraheem Abu Mustafa

Israeli Defense Minister Avigdor Liberman is currently considering allowing Palestinians from the Gaza Strip to once again work in Israel, particularly in agriculture. This was once a common practice, but it stopped about a decade ago after Hamas seized control of Gaza in 2007. What makes today's situation unusual is that the economic crisis that Gazans face is not what will influence Liberman’s final decision. Rather, it is pressure from the leaders of the southern Israeli regional councils of Shaar HaNegev and Eshkol, where there is a severe shortage of laborers to work in agriculture, the primary source of income for the communities bordering the Gaza Strip. The heads of the regional councils met with Liberman in September to ask him to consider granting entry to workers from Gaza to save agricultural production in the area.

Before the Hamas coup, laborers from Gaza who worked in Israel in construction, agriculture and industry were the driving force of Gaza's economy. People with permits to enter Israel were considered lucky despite the difficulties involved and the long journey they were forced to endure night after night so they could reach their destinations before dawn to perform manual labor for a minuscule fee. After all, it allowed them to somehow support their families.

Will Liberman acquiesce, or will he reject the council heads’ request? At this point, no one knows. In the meantime, however, dozens of workers from Gaza can be seen every day at major intersections in southern Israeli cities, including Ashdod and Ashkelon, seeking to land odd jobs. They gather, clutching their bags of food, hoping to be picked up by building and repair contractors, even if only for a single day's work. These scenes are a reminder of days gone by, when most construction workers in Israel came from Gaza.

One might therefore ask whether there has been a change in Israel’s closed crossing policy. Is the presence of Palestinian workers in Ashdod or Ashkelon the result of an easing of the closure in an attempt to reduce the economic distress felt by Gaza’s residents?

An examination by Al-Monitor found that the closure policy has not changed, and if anything, it has become more rigid. It was also discovered that the workers are actually merchants and businessmen who have permits to enter Israel for meetings and to purchase raw materials from Israeli suppliers. Given the appalling state of Gaza’s economy and the dramatic drop in their incomes, however, they are using their entry permits to instead work at odd jobs in the cities and towns across southern Israel.

Most of these businessmen were once considered Gaza’s economic elite. They dealt in large sums of money and employed dozens of Palestinian workers. Then came the closure, lasting almost a decade, and their businesses began to face serious difficulties. Having lost their sources of income, some suddenly found themselves on the verge of bankruptcy. Many have used up savings painstakingly accumulated over the years. The way they see it, their only option now is to go to Israel, offer their expertise in construction and return home to Gaza with weekly or even just a day's wages. At least they will have enough money to buy the most basic of essentials such as food and clothing.

N., a Nuseirat resident who spoke to Al-Monitor on condition of anonymity, said that he had owned a small factory that manufactured flooring tiles. He employed 20 workers, and they used their earnings to support their extended families. Israeli restrictions on the import of cement and other raw materials and the economic crisis in Gaza forced him to stop all of his manufacturing lines. They were costing him money. The machinery then rusted due to lack of use, except for the machines on a single production line, which he turns on every so often. “I keep the factory open, just so I can still be considered a businessman,” he explained. “If I close [the factory], I’ll lose the option of finding work in Israel.”

He decided to work in construction in Israel after he heard that other Gaza entrepreneurs were doing so. “Most of us worked with Israelis,” N. said. “We have quite a few Israeli friends, and we are considered experts in the fields of flooring and construction.” He claimed that some days he can earn as much as 500 shekels ($130), an enormous sum in Gaza, but on other days he goes home without a penny.

M., a resident of Beit Lahia, in northern Gaza, exits through the Erez crossing every so often using the special permit for businessmen. “I am very careful not to stand at the intersections with everyone else. I am scared that they will catch me, and then I will lose the only thing we have left. I have friends in Ashkelon and Beer Tuvia,” he said. “They find me day jobs.”

Requesting anonymity, he said he has worked as a porter, a packer, a cleaner and even a farmhand in the village of Bitha in the Negev where he knows a farmer. M. sometimes sleeps at the farmer’s home.

“He feels sorry for us and for what is happening to us these days,” he said. “We were young when we first met. Our families knew each other. I knew his children when they were young. Meanwhile, they have grown up. My children grew up too. I have seven sons and three daughters, and never in my life did I imagine that I would have nothing to give them to eat. If only I never had children. If only I had never brought them [into the world] to suffer. I love them. They are my life, but I don’t know what will happen to them a year, two years, 10 years from now. What will happen to us? What will become of us?”

Other businessmen refused to go into detail about their situations. One of them explained that there is considerable fear, not only of Israel, but also of Hamas. “As long as Hamas rules Gaza, there will be no chance of the situation of the local residents improving,” he said.

“We don’t interest anyone anymore,” N. concluded. “We could all die, and no one would give a damn.”