Shlomi Eldar writes that the economic stranglehold failed to take down the Hamas government, and it may yet be the economy that restores broken bridges between the two peoples. 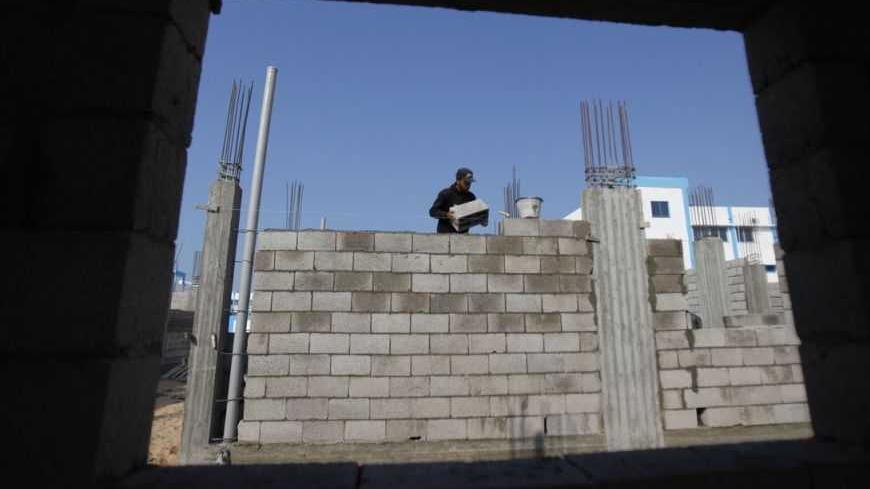 A Palestinian laborer works at a construction site in the southern Gaza Strip, Jan. 2, 2013, after Israel eased its blockade, allowing a shipment of gravel for private construction into the Palestinian territory for the first time since Hamas seized control in 2007. - REUTERS/Ibraheem Abu Mustafa

We can not claim it clear and loud: The siege of Gaza has been lifted, or at least just about lifted.

Israel first imposed its “closure” on the Gaza Strip on June 15, 2007, right after Hamas’ military coup. Prime Minister [at the time] Ehud Olmert announced that the border crossings between Israel and Gaza would be closed until further notice. Olmert then flew off to Washington, but not before he allowed for what he called “humanitarian aid” to prevent a dire crisis in Gaza resulting from a dearth of basic foods. Even more than that, he wanted to prevent a torrent of angry criticism of Israel from the international community.

How do you go about imposing a siege while at the same time preventing starvation? At the District Coordination and Liaison Office of the Coordinator of Government Activities in the Territories, they prepared a list of just forty items that could be delivered to the 1.5 million residents of Gaza, and even then, only through the Kerem Shalom border crossing, known to the Palestinians as the Abu Salem border crossing.

And so cusbara, better known by as coriander or cilantro (Coriandrum sativum), became a symbol of the ruthless nature of Israel’s siege. The inevitable question was: Why was cilantro (and various other, random items such as ginger, jam, musical instruments and notebooks) not included in the list of items that could be provided to Gaza? Based on the government’s response, the reason for this was a military secret of the highest order.

Israel’s political leadership, acting with the full cooperation of senior Palestinian officials seeking revenge for the ignominious expulsion of their leaders from Gaza, really and truly believed that the pressure of an economic stranglehold would bring the Hamas government to its knees. The cries of its suffering citizens would bring about its collapse.

At the time (June 2009), journalists Uri Blau and Yotam Feldman published an exposé in the Haaretz newspaper claiming that the Office of the Coordinator of Government Activities in the Territories prepared a document called “The Red Lines,” intended to provide a quantitative definition of those steps that would lead to disaster if Israel tightened the siege. The authors of the document were instructed to provide a nutritional balance sheet of each food item allowed into Gaza, down to the last calorie and gram. They were then to determine the subsistence requirements for the people of Gaza so as to avoid a humanitarian catastrophe. Not a single gram more would be allowed in.

At first, the IDF denied the existence of such a document. Then Gisha, a local NGO, petitioned the Supreme Court, and the state was finally forced to disclose the document to the public. And so, in October 2012, more than five years after the closure on Gaza was first imposed, the IDF was forced to release "The Red Lines.” That was when the following (daily) calculation was first revealed.

The average number of calories needed by Gaza’s Palestinians is 2,279 per day, which translates into 1,836 grams of food, or 2,575 tons per day for all of Gaza’s inhabitants. It was a callous, cynical way to calculate the necessary caloric intake of Gaza’s population.

But those days have passed. Many waves have crashed against Gaza’s shores since the sailing of the Mavi Marmara, the Turkish ship that cost Israel a near-irreversible crisis of confidence with Ankara. The failed attempt by naval commandos to seize the ship, and the international furor caused by its lethal consequences, forced Prime Minister Benjamin Netanyahu to ease at least some of the restrictions that constituted the siege. It was the only way that he could appease the Turks and the rest of the world, too.

Many events have taken place since then, such as the deal to release the kidnapped Israeli soldier Gilad Shalit and the cease-fire agreements mediated by Egypt to end Operation “Pillar of Defense,” which gradually forced Israel to loosen its grip even further. By now, we can say without any reservations that the siege has been lifted, at least for the most part. It seems as if even Netanyahu’s government recognizes that if the Hamas government does fall, it will not be because of a lack of cilantro, or of petrol, electricity, or fruits and vegetables. It won’t even be because of a shortage of metal or cement.

Rana Baker writes in Al-Monitor that Gaza’s markets are now teeming with Israeli products. Anyone wandering the local supermarkets will find the shelves stacked with goods produced by just about every Israeli company imaginable. But, as Rana also writes, this is a false representation of the actual state of affairs, intended to give the impression that Israel is easing its siege on Gaza, when it really isn’t. According to her, Gazans are forced to import and acquire these Israeli goods because of restrictions imposed by Israel on local manufacturing. Gaza’s factories are still unable to import raw materials at their discretion, and therefore cannot compete with goods brought in from outside. The result is an absurd situation in which Israel does not allow raw materials to be imported into Gaza so that the local population can manufacture its own goods, while benefiting from a monopoly on commerce that brings millions of dollars into the state’s coffers.

But this claim is only partially correct. It is true that most of Gaza’s industries collapsed as a result of Israel’s siege. It will take a long time before they recover and rebuild themselves, if at all. Nevertheless, the glass is also half-full. Taking gradual, incremental steps (known in Hebrew as “slicing the salami”), Israel has lifted most of its trade restrictions on Gaza, and the border crossings are operating at almost the same capacity as they did before the coup that brought Hamas to power.

The current situation is clearly the result of both Israel and Hamas waking up to reality.

It looks like both sides have finally grown up and reached a conclusion that they could have reached long ago, sparing themselves so much poverty and suffering, and yes, so much blood. Israel realized that economic pressure will not bring down the Hamas government, while the Hamas leadership in Gaza realized that it has no alternative. It must adapt to reality and accept the existence of Israel.

So here’s a productive suggestion that would benefit both sides: Until the Hamas coup six years ago, thousands of Palestinian workers left Gaza to work in Israel every day. The culture of abundance that dominates Israeli society longs for manual laborers, working in construction and agriculture.

I know that this will sound patronizing to many and seem like an Israeli attempt to exploit cheap labor from Gaza. Nevertheless, I am confident that this will benefit both peoples. I am convinced that the tens of thousands of workers, who made their livings in Israel for years, long for the day when they can go back to working with Israelis again. After all, many of them had formed friendships with Israelis, and they all stand to benefit from wages that are higher than anything that the current market in Gaza can offer.

Almost 100,000 day laborers worked in Israel in the days leading up to the Second Intifada. In fact, it was these workers who kept the wheels of Gaza’s economy in motion. Israeli industrial concerns such as Kitan, Renoir, and Fox provided raw materials to workshops, especially garment workshops, in Gaza, and the finished products would return through the border crossings to Israeli and international markets. Even during the Intifada, those same “oxygen tubes,” as the Erez and Karni border crossings were frequently called, continued to operate as normal. The underlying principle was, “We will continue to fight terrorism as if there is no peace, and we will continue to trade with Gaza as if there is no terrorism.”

It may have taken two wars in Gaza, Operations “Cast Lead” and “Pillar of Defense,” along with countless smaller military operations, but it looks like both sides have finally grown up and realized what is best for them. The siege of Gaza has been lifted for the most part, and Hamas is seriously beginning to consider recognizing the principle of a two-state solution. I have no idea how much longer Hamas will continue considering this, but as far as both sides are considered, getting the economy back into gear could help bring down the walls of enmity, which have only gotten taller over the past six years.

Netanyahu has already declared that he believes in economic peace. Who knows? Maybe the Palestinian workers returning to their jobs in Israel will be the “emissaries of peace,” who will bridge the divide between the two sides.