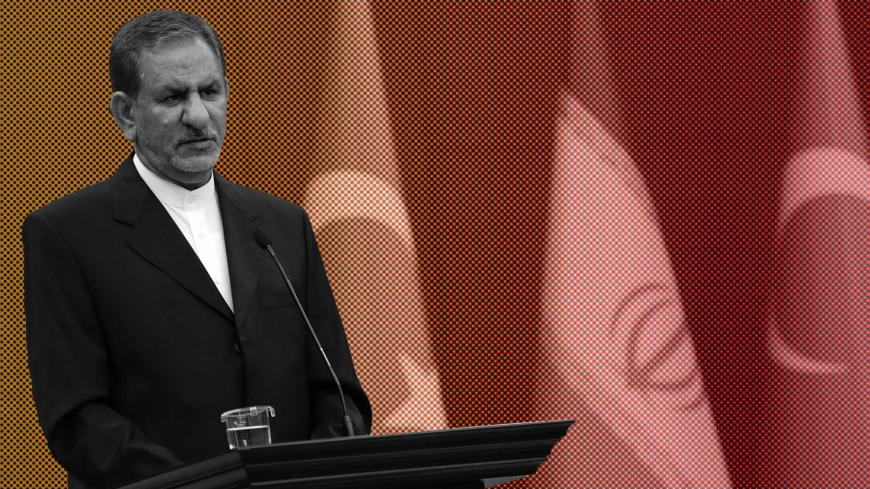 Following his candidacy in the May presidential elections, First Vice President Eshaq Jahangiri has appeared as a capable and likely candidate for the Reformists in Iran’s next contest in 2021. However, the recent detention of his brother over allegations of corruption may have thrown some obstacles in his path.

Reports about the arrest of the vice president’s younger brother, Mahdi Jahangiri, first surfaced on social media networks on Oct. 6. The news was soon confirmed by official media outlets.

The vice president’s brother has appeared in pictures with Esfandiar Rahim Mashaei, who was the controversial adviser and chief of staff for former President Mahmoud Ahmadinejad. Mahdi served as deputy head of the Cultural Heritage and Tourism Organization’s investment and projects department when Mashaei headed the organization in 2005-2009. The younger Jahangiri was forced to step down from this post following a November 2008 conference called “Investment Opportunities in the Tourism Industry of Iran.” During the opening ceremony of the conference, a dozen women dressed in traditional costumes came onto the stage playing music and presenting a copy of the holy Quran to the Quran reciter on the stage. The Principlist movement and some senior clerics strongly criticized the performance, prompting Mahdi to resign from his post. Despite his resignation, he went on to establish the lucrative Tourism Financial Group, followed by the Iran Cultural Heritage and Tourism Investment Corporation, which included several smaller firms such as the Tourism Bank.

Given Mahdi’s sudden success in business, his ties with the Ahmadinejad-Mashaei circle and the numerous financial corruption cases associated with the era of the former president, it was no surprise that he eventually came under scrutiny. The first vice president addressed this possibility directly in an Oct. 6 Instagram post, writing, “I don’t have any detailed information about how he was arrested or what the charges are, but in any case, he is not employed by the government or engaged in political activity. … What happened was expected and now we must wait.” He added, “I hope this is not a case of political abuse and that everyone will be treated equally in the quest for justice, in the fight against corruption and in accordance with the rule of law.”

Eshaq once again approached the topic at an Oct. 7 conference, saying, “Corruption has become an organized phenomenon in the country and I know all too well how deep it runs. … There is no red line in countering corruption, and nobody should have immunity. … Nobody has the right to take political revenge under the pretext of fighting corruption, and all the state institutions should act within the law.” He concluded, “Today, the country’s economy is in the hands of the private sector and no one has the right to unilaterally violate the boundaries of the private sector. This sector is also interested in fighting corruption, but when it sees how individuals in the private sector are treated, it thinks that officials only talk and don’t act.”

Mahdi is also the deputy chairman of the Tehran Chamber of Commerce, a hub for Iranian merchants and businessmen. The heads of this privately run economic syndicate — which plays an important role in Iran’s economy — are elected by local Iranian merchants.

The question is whether Mahdi’s arrest has anything to do with his older brother. Has he been the beneficiary of rents from the administration of President Hassan Rouhani? Alireza Zakani, a former parliament member and a relatively hard-line Principlist, notably said on May 3, “Mr. Jahangiri’s family has access to funds amounting to trillions [of Iranian rials]. They have banks. They have a hand in petrochemicals. Who does the Tourism Bank belong to? It belongs to Mr. [Eshaq] Jahangiri’s brother, who obtained this under the previous administration, through his ties with Esfandiar Rahim Mashaei.”

On Oct. 8, without naming the first vice president’s brother, judicial spokesman Gholamhossein Mohseni Ejei said, “One of the people who was [engaged] in banking corruption was arrested recently. He had links with 14 banks and has more than 30 trillion rials [$860 million] of debt. Around 16 trillion rials ($459 million) of this [debt] has been suspended. He received services from 14 banks which have been suspended and they need to see which rents he used. A person who has this amount of debt definitely has power, rents and influence that have enabled him to receive services from 14 banks.”

On Oct. 10, a high-ranking commander of the Islamic Revolutionary Guard Corps (IRGC), Gen. Gholam-Ali Abu-Hamze, announced that it was the IRGC that had detained the vice president’s brother and said, “I will be clear: The IRGC will act against anyone who wants to move in opposition to the people and the state, and we will go after every single one of them.” He added, “The brother of [Mahdi] says they are seeking to take revenge instead of condemning what his brother has done.”

Meanwhile, the Reformists have tried hard to distance the first vice president from his brother, emphasizing that Mahdi never held a government post and is only active in the private sector.

Although many details about this case have yet to be released, including whether Mahdi has any connections with the Rouhani administration, the detention itself has dealt a huge blow to Eshaq’s chances as the potential Reformist candidate in the 2021 presidential elections, despite his successful performance in the televised presidential debates in May.