Iran's president mired in palace intrigue amid rising US pressure

While fighting US pressure as well as radicals at home, Iran’s President Hassan Rouhani is mired in a rivalry within his own inner circle. 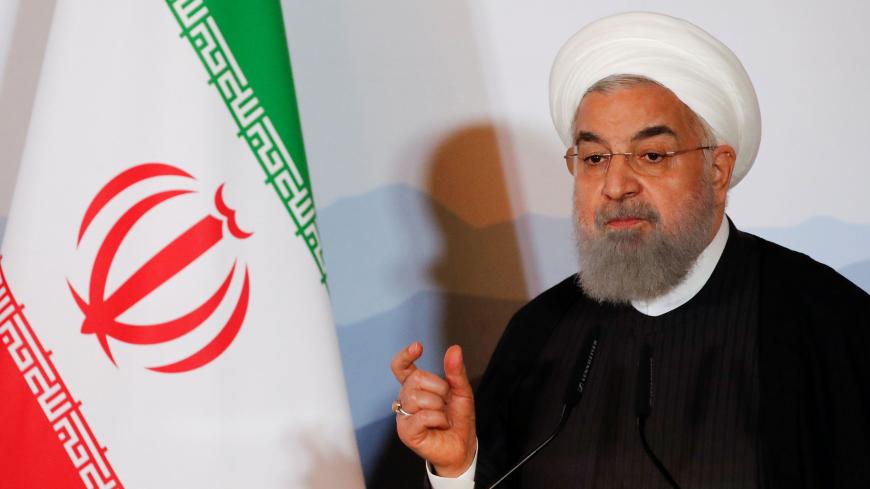 There is a war going on within the Iranian presidential palace, where two leading members of the administration are striving to force First Vice President Eshaq Jahangiri out of the government.

On one side of the confrontation is presidential Chief of Staff Mahmoud Vaezi and government spokesman Mohammad Bagher Nobakht, who also doubles as head of the Management and Planning Organization. The two men are founding members of the Moderation and Development Party under the leadership of President Hassan Rouhani. On the other side are Jahangiri and his Reformist Executives of Construction Party.

The Moderation and Development Party was established in 1999, while the Executives of Construction Party came into existence in 1996. Both had the support of the late Ayatollah Akbar Hashemi Rafsanjani, a former two-time president (1989-97) who passed away in 2017.

Prior to Rouhani's initial election in 2013, Vaezi and Nobakht served as deputies of Rouhani at the Expediency Council’s Center for Strategic Research. Back then, Jahangiri, who was close to Rafsanjani, was a prominent Reformist figure who had prepared himself to run in the 2013 election. But as he saw Rafsanjani nominating himself, he ultimately stepped back.

In Rouhani’s first presidential term, Jahangiri was proposed as first vice president by Rafsanjani. What ought to be noted here is that Rouhani has long been considered Rafsanjani's protege and served as the Ayatollah's deputy or adviser in a variety of positions over the years. Meanwhile, Vaezi appeared as a diplomat in the televised presidential debates on foreign policy ahead of the 2013 polls and expected to be appointed as foreign minister by Rouhani. However, the "diplomat sheikh" rather appointed Mohammad Javad Zarif the chief diplomat while naming Vaezi minister of information and communications technology.

In the wake of Rouhani's re-election in 2017 and amid increasing pressure on his then chief of staff, moderate-conservative Mohammad Nahavandian, Vaezi — a member of the president’s inner circle — was appointed the new chief of staff.

As Vaezi's position in the presidential palace was strengthened, Reformists criticized him for limiting their access to the president and acting on his own rather than on Rouhani’s behalf on some issues.

In late December 2017, Ghasem Mirzaei Nekou, a senior Reformist parliament member, indirectly accused Vaezi of being the reason why no meetings were being held between Rouhani and his camp. He also criticized Vaezi for having signed letters or orders in response to a number of letters that had been written to the president. "This increase of power can have political consequences," Nekou warned. However, the empowerment of the chief of staff is, in fact, a legacy of former President Mahmoud Ahmadinejad, who was locked in confrontation with Supreme Leader Ayatollah Ali Khamenei over the naming of his chief of staff, Esfandiar Rahim Mashaei, as first vice president. Mashaei was long accused of having appropriated undue power.

While Vaezi is believed by some to be a Reformist, he is, rather, a moderate-conservative; in the past, he has even voted for hard-line figures such as Morteza Nabavi in parliamentary elections. In this vein, his alleged meddling in parliament’s internal elections over the speakership and speaker deputies in the past two years has repeatedly angered the Reformists. On June 19, 2017, prominent Reformist figure Hossein Marashi accused Vaezi of having gone behind the Reformists' back in parliament and strengthening the conservatives in line with a grand strategy of forging a coalition with the conservatives against Reformist lawmakers.

Now, tensions between the Reformists and the Moderation and Development Party have mounted as Vaezi and Nobakht both appear to be attempting to undermine Jahangiri and consequently forcing him to resign. This is reputed to almost have succeeded since the first vice president recently orally told the president that he wants to step down.

According to local media, Vaezi has taken over much of Jahangiri's duties and authority, turning him into a powerless vice president. This is while many assumed that Jahangiri would be given a bigger role owing to his strong and notable defense of Rouhani in the televised debates ahead of the 2017 presidential election. In this vein, Vaezi's apparent effort to gain more influence has gone to the extent that, rather than Jahangiri, the chief of staff has been playing a key role in appointing provincial governors around the country.

Moreover, divisions between the Moderation and Development Party and the Executives of Construction Party entered a new phase amid the worsening of the economic crisis in Iran. According to Abdullah Naseri, a figure close to Reformist leader Mohammad Khatami, Jahangiri has been in disagreement with Rouhani’s economic team, which is in the hands of Nobakht. Rouhani has apparently not heeded Jahangiri’s warnings, leading to Jahangiri’s resignation, which was not accepted by the president despite the consent of the first vice president’s rivals. Given the dire economic conditions in Iran, many among the public are calling for the resignation of the government's economic team — including Nobakht.

Intriguingly, while having no important economic role, Jahangiri has been depicted as the man behind the administration's economic plan. Of note, he was chosen in April to announce the most important economic decision of the government this year on live television — namely, the unification of the official and open market currency rates. As the rial unification failed and the diversion between the official and open market rates skyrocketed, people pointed the finger at Jahangiri, leading to his public image being tarnished. This is while he had turned into a popular figure after the 2017 presidential debates for his frankness and role as a shield in the face of the attacks of Rouhani’s rivals.

Amid the ongoing public pressure for change, Rouhani appointed Abdul-Naser Hemmati as the new head of the Central Bank of Iran, ending Valiollah Seif's five-year term. Yet, despite the rising demands for a reshuffle, the president has kept Nobakht, who is considered one of the main pillars of his economic team.

As partisan quarrels have persisted, Sazandegi newspaper, which belongs to the Executives of Construction Party, on July 7 called for Nobakht’s resignation. In response, Aftab News, which is believed to be close to the Moderation and Development Party — including Nobakht — savaged its rivals, arguing on the same day, "The key concept of ‘changing the economic team of the government’ is just a pretext to damage the administration in order to dictate their [Executives of Construction] party and political designs to the government and the president." Another news website close to the Moderation and Development Party also portrayed Jahangiri as the leader of Rouhani's economic team and claimed that he wants to resign.

Amid the infighting within his own inner circle, it seems as if Rouhani has managed to enforce a cease-fire as he recently appointed Jahangiri the head of the Special Economic Campaign against the US Economic War. Meanwhile, Nobakht has tweeted in support of Jahangiri's "logical positions" in the Cabinet. However, it remains unclear whether the truce is just temporary and whether the disagreements within the presidential palace will surface once again.