Iran’s president appears to be turning right on the political stage as his friends gain more prominence in his second-term Cabinet. 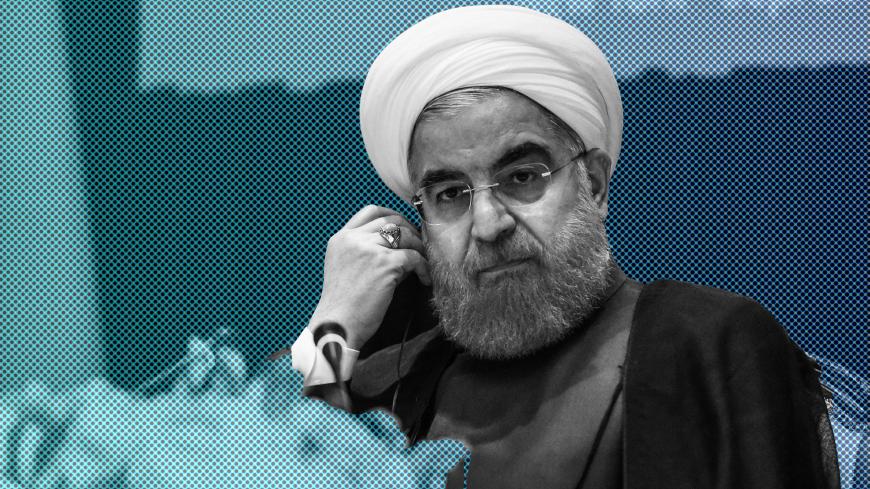 Iranian President Hassan Rouhani’s second term in office, which began in August, has been accompanied by much criticism from the Reformists, so much so that some have even reported rifts emerging within the Cabinet.

Rouhani entered Iran’s presidential election scene in 2013 and 2017 as a candidate for the Reform movement, which allowed him to defeat his conservative rivals. However, it seems Iran’s president is now more than ever engaged in launching a movement of his own.

Rumors of Rouhani’s plans for a new movement began after he introduced his Cabinet lineup for the 12th administration to parliament. The expectation was that, just as in the previous Cabinet, Rouhani would give First Vice President Eshaq Jahangiri control of selecting the administration’s economic team. This expectation stemmed from Jahangiri’s previous experience as minister of industries and mines, from 2000 to 2005, and his prominent economics background, which the president himself lacked.

However, not only did this not happen, but Jahangiri’s close allies were removed from the Cabinet lineup. For instance, Ali Tayebnia, who had served as finance minister during Rouhani’s first presidential term and who was approved by most Iranian economists and had close ties with Jahangiri, was replaced by Masoud Karbasian, the former head of the Iranian Customs Administration.

At the same time, Rouhani appointed Mohammad Nahavandian, his chief of staff since 2013, as his deputy for economic affairs, a new title in the array of Iranian presidential deputies. Meanwhile, Rouhani’s longtime friend Mahmoud Vaezi, whom many saw as the main director of the Cabinet lineup, was appointed as the president’s new chief of staff.

But who is Mahmoud Vaezi? Most recently, he served as minister of information and communications technology, from 2013 until this year. Prior to that, he served as deputy of foreign policy and international relations at the Center for Strategic Research, which was headed by Rouhani at the time. Additionally, Vaezi belongs to the Moderation and Development Party, of which Rouhani was also a member. In fact, Vaezi co-founded the party in March 1999, although it was not especially active at the time. Other party members have included current government spokesman Mohammad Bagher Nobakht, who acted as secretary-general. The party gained prominence during the 2013 presidential election when Rouhani entered the election scene. Although the party's members did not play an influential role in Rouhani’s victory, the president never forgot his old allies.

Despite Vaezi’s extensive efforts and lobbying in 2013 to become foreign minister, the post was assigned to Mohammad Javad Zarif, given his many capabilities that could not be ignored.

Yet it appears that Vaezi's four-year term as minister of information and communications technology has brought him closer to Rouhani, so much so that, together with Nahavandian, he has made Jahangiri’s role seem insignificant. This rift has been noticed by Iranian media outlets, and some have even reported that Jahangiri was thinking of resigning from his post as vice president. Although never confirmed, evidence indicated that the idea was not too far-fetched.

​Reformists have criticized Rouhani's Cabinet decisions. They accuse him of shifting to the right, toward the Principlist movement. Reformists are also unhappy about Rouhani’s unfulfilled campaign promises, such as his pledge to give women a more prominent role in Iran’s political scene. Unfortunately, Rouhani did not appoint a single female minister to his Cabinet.

The Iranian president had also promised to remove the security atmosphere that prevails over Iranian universities and create a more open environment. Yet students and professors at Iran’s top-ranking universities have criticized his proposed minister of science. Reformist leader Mohammad Reza Aref, a member of the parliamentary Hope faction and a longtime critic of Rouhani, warned Nov. 4: Be careful to not play a role in creating a rift between the administration and Reformists.

Reformist politician Mostafa Tajzadeh, who briefly served as acting minister of interior in 1998  in the administration of President Mohammad Khatami, also pointed to Rouhani’s unfulfilled campaign promises during a Nov. 5 interview and indirectly warned, “Rouhani is smarter than to shift to the right, because he knows that if he does so, he will not gain anything. Instead he will lose the huge popular support behind him, and Rouhani should be careful of this.”

However, some see Rouhani's shift as linked to the stronger role of his trusted friends. This circle of friends — composed of Vaezi, Nobakht, Nahavandian and his cultural adviser Hesamodin Ashna — is trying to maintain Rouhani’s distance from the Reformists. This group believes that if it does not offend Principlist sensibilities, it will be able to portray Rouhani as a moderate without angering hard-line Principlists.

On the other hand, the forces close to Rouhani are trying to use this approach to create a new playground for themselves, so they can come out from under the shadow of the Reformists and the Principlists. These forces, who were never influential on the Reformist or the Principlist front, are now trying to present themselves as being under Rouhani’s umbrella. Such measures are similar to events during the tenure of former President Mahmoud Ahmadinejad, when he tried to create a class that was loyal to him yet free from the Principlists. Of course, the outcome was not favorable for Ahmadinejad and only drove him further away from the conservatives. Rouhani appears to be following a similar scenario with the Reformist camp, where he wants to show himself as independent. However, one must wait and see whether Tajzadeh's warning will become a reality and whether Rouhani will lose popular support and political capital.