Iranian Reformists anxious as Rouhani takes turn to the right

Iranian Reformists worry that the Rouhani administration will officially form a coalition with Ali Larijani, the moderate conservative parliament speaker. 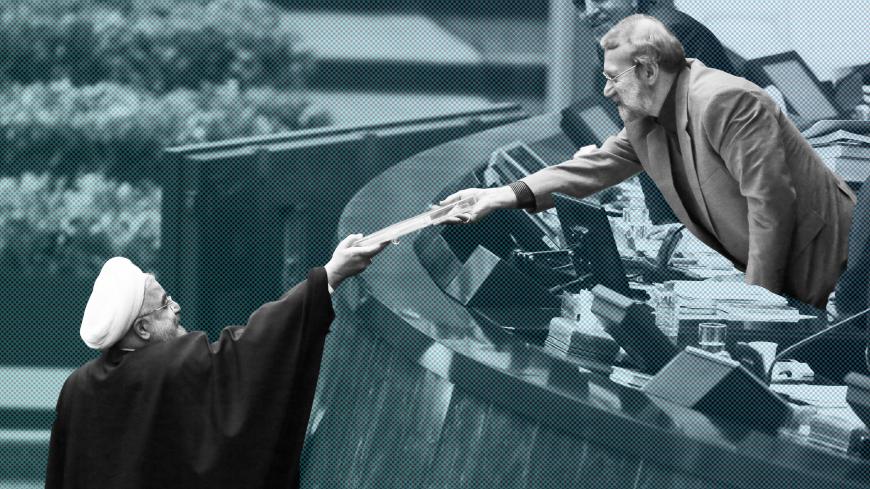 In Iran, the Reformists are becoming increasingly suspicious about the possibility that the centrist Hassan Rouhani administration will officially form a coalition with moderate conservative parliament Speaker Ali Larijani. This comes as many are saying that Rouhani’s second-term Cabinet has been filled with figures from the president’s inner circle instead of Reformists; at the same time, Reformist First Vice President Eshaq Jahangiri’s role appears to have diminished.

Since taking office in 2013, Rouhani has enjoyed close ties with Larijani, who has been speaker since 2008. During this time, Larijani has come to Rouhani’s rescue at several critical junctures, including during the nuclear negotiations, in parliament’s ratification of the Joint Comprehensive Plan of Action (JCPOA) and in confidence votes for ministers in Rouhani’s first and second Cabinets. In contrast with the tense relations he had with President Mahmoud Ahmadinejad, Larijani has enjoyed close relations with Rouhani and approved many measures taken by the executive branch. This interaction, of course, has not been one-sided, as Rouhani has responded to Larijani’s support in kind.

One example of this mutual support is the case of conservative Abdolreza Rahmani Fazli, who has served as interior minister in both of Rouhani’s Cabinets despite strong Reformist opposition. Indeed, virtually all political observers in Iran believe Larijani is the reason why Rahmani Fazli holds his post. Now the Reform movement is becoming more concerned about Rouhani and Larijani’s close ties, especially in light of growing speculation about the speaker’s potential candidacy in the 2021 presidential elections. At the same time, Jahangiri’s notable performance in the 2017 presidential debates, which drew him favorable public opinion, has also prompted the Reformist front to view him as a potential contender.

As such, in the eyes of many Reformists, the Rouhani administration is now facing a critical crossroads: that of choosing between its Reformist vice president or its moderate conservative ally in parliament. This juncture will become even more challenging for Rouhani as his term advances. At present, the Reformists believe the balance is tipped more in favor of Larijani than Jahangiri. Indeed, ever since the president introduced his second Cabinet, Jahangiri has been pushed to the sidelines. Even the task of creating a lineup for the government’s economic team, which was to be assigned to Jahangiri, was taken away, and instead Rouhani created the team himself by appointing individuals from his inner circle to key economic positions.

Parliament’s move to impeach three Reformist ministers is the most recent incident illustrating the dynamics between Rouhani and Larijani. On March 13, parliament began impeachment proceedings against the ministers of labor, of agriculture and rof oads and urban development — all of whom are from the Reform movement. Despite major criticisms regarding Labor Minister Ali Rabiei’s performance on unemployment and the social welfare of workers, many Reformists blame his impeachment on the Principlists — and especially Larijani’s entourage.

On March 11, Abdollah Ramezanzadeh, a Reformist politician who served as spokesman for the government of President Mohammad Khatami from 2001-2005, posted several tweets in which he warned Reformist parliament members not to be fooled, saying Larijani was behind the ministers’ impeachment.

One day later, on March 12, Reformist Ali Shakouri-Rad, secretary-general of the Union of Islamic Iran People Party, tweeted, “There are no prospects for the existence of better options for the three ministries. What is worse is that a government party seems to have colluded or reached an agreement with a parliamentary party over the replacements [of the three ministers]. There is definitely no good in this.” But what was really going on behind the scenes? It appears that Larijani and the president may have agreed to remove Reformist forces from the Cabinet and replace them with figures from Rouhani’s inner circle. Meanwhile, Larijani — who is an astute player on Iran’s political stage — may have tried to avoid any repercussions by delegating the impeachment sessions to Deputy Speaker Masoud Pezeshkian. The impeachment plan, however, was unsuccessful, as all three ministers survived the votes of confidence, despite much difficulty.

After the impeachment proceedings, Ramezanzadeh tweeted March 13, “Rabiei’s vote is an indication that Larijani has 125 votes in parliament at most. If the [Reformist] ‘Hope’ faction becomes more active, it can take over leadership of parliament.”

Even though the alleged maneuvering of Rouhani and Larijani to rid the Cabinet of three prominent Reformists failed, it is likely that the two will continue to engage in similar joint measures. Just like Larijani, Rouhani is viewed as a clever political player, and it is very possible that if he sees a potentially bleak future with the parliament speaker — and in the absence of other options — he might lean more toward the Reformists and his vice president. Up to now, though, this does not seem to be the case.

In a March 18 interview, Mohammad Atrianfar, a member of the Executives of Construction Party, said, “Mr. Jahangiri’s role in the new administration is very small. We expected Jahangiri to be put in charge of the government’s economic team. However, Mr. Rouhani preferred to trust the loyal forces in his inner circle [instead].” Such statements are an indication of the Reformists’ concern over Rouhani’s performance and his being too close to the right on the Iranian political spectrum — and especially Larijani. This is particularly significant since the Reform movement has already witnessed how easily Rouhani dismisses the slogans and promises he made to them. As such, the current trajectory of tension between Rouhani and the Reformists suggests the probability of a looming confrontation — to the detriment of both sides. Only time will tell whether the president will ease up on his turn to the right.