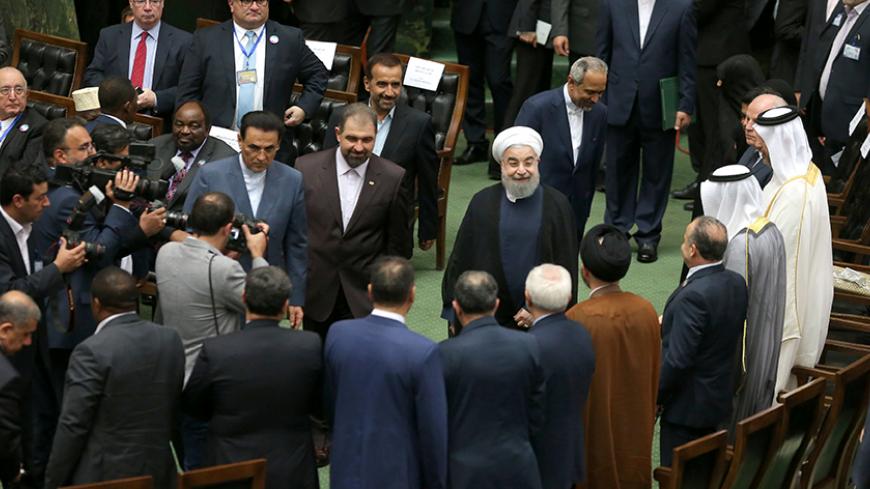 Iranian President Hassan Rouhani arrives for his swearing-in ceremony for a second term, at the parliament in Tehran, Iran, Aug. 5, 2017. - Nazanin Tabatabaee Yazdi/TIMA

The current list of proposed ministers has drawn criticism from both Reformists and moderates, who are discontent with Rouhani’s choices. In recent weeks, the Reformists have demanded that Rouhani not surrender to pressure from conservatives and hard-liners who once dominated parliament and instead pick suitable ministers who believe in his campaign promises, which were based on political and social reform. In addition, the Reformists expected Rouhani to appoint at least one woman as a minister — an expectation that has not been realized. However, Mohsen Biglari, a moderate member of parliament, said Aug. 8, “There are rumors about the naming of a woman for the Science Ministry.”

The reappointments of Rabiei and Rahmani Fazli in particular have raised eyebrows in the Reformist camp. Reformists say Rabiei has been lackluster in his performance as labor and social welfare minister; many Reformist parliament members have accused him of preventing journalists from reopening the Association of Iranian Journalists, which was closed by the government in 2009. Reformist media have also reported allegations that Rabiei has illegally ordered entities operating under his ministry to grant loans to parliament members in order to attract their support ahead of the parliamentary votes of confidence.

Bahram Parsai — spokesman for the Reformist parliamentary Hope faction — told Iranian media Aug. 8, “The parliament’s atmosphere calls for proficient and mighty figures [to lead the ministries]. [At present], there is no satisfaction [among parliament members] about the performance of the [Labor and Social] Welfare Ministry. … Rabiei was one of those who did not get a passing grade in surveys the Hope faction has held.”

Rahmani Fazli is also under attack by Reformists and moderates for not pursuing policy in line with their objectives and for failing to change many of the governors who were appointed by former hard-line President Mahmoud Ahmadinejad. Furthermore, Reformists have also criticized Rahmani Fazli for what is characterized as his inability to properly manage the May 19 presidential elections; there are claims that nearly 4 million people stood in line for hours and couldn’t cast their votes on election day.

Rouhani supporters have also expressed their discontent on social media. On Aug. 8, Reform — a news channel on the popular smartphone app Telegram — held a survey about the proposed Cabinet, and the majority of participants expressed their disapproval.

In addition to Rabiei and Rahmani Fazli, there are two other names on Rouhani’s proposed second-term Cabinet that may face serious obstacles in getting approved. On Aug. 8, Reformist parliament member Gholamali Jaffarizadeh Imanabadi told a local media outlet that it is “definite” that Seyyed Mohammad Bathai, the proposed education minister, and Mohammad Javad Azari Jahromi, the proposed communications and information technology minister, will not be approved by parliament.