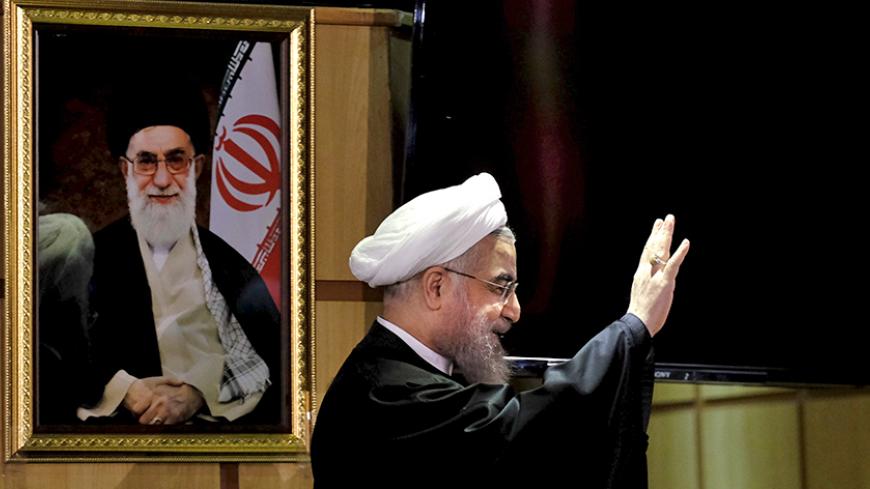 Iranian President Hassan Rouhani waves as he stands next to a portrait of Supreme Leader Ayatollah Ali Khamenei at the Interior Ministry in Tehran, Iran, Dec. 21, 2015. - REUTERS/Raheb Homavandi/TIMA

President Hassan Rouhani attended his endorsement ceremony Aug. 3 with Ayatollah Ali Khamenei and the heads of the other two branches of government. The more significant day for Rouhani, however, will be his swearing-in ceremony Aug. 5, when, in front of an open session of parliament, he will introduce his new Cabinet. Reports that Rouhani consulted with Khamenei over potential candidates have caused the president considerable controversy before his second term has even started.

The first source of controversy was with the supreme leader’s office, which denied that Khamenei was involved in choosing every Cabinet position. A statement on the supreme leader's website announced that all administrations coordinate with Khamenei for ministry positions in foreign affairs, defense and intelligence due to Khamenei’s constitutional duties in those areas. In Iran, the supreme leader is the commander in chief.

The statement continued that Khamenei has additional “sensitivities” regarding those picked to head the Ministry of Science, Research and Technology; the Ministry of Education; and the Ministry of Culture and Islamic Guidance. The Ministry of Science is particularly important in Iran because the minister appoints the heads of universities, which are known, historically, to be hotbeds of political activity in the country. The Ministry of Culture, given its role in issuing licenses to make films, sell books and stage music concerts, is also significant since Rouhani and conservatives have clashed over the country's cultural direction and openness. The statement, however, asserted that Khamenei does not get involved in choosing these Cabinet positions.

Mohammad Javad Abtahi, a conservative member of parliament, felt that Rouhani’s claim to have consulted with Khamenei over his Cabinet list was more of an insurance policy against Reformists. Abtahi said that Rouhani is seeking “refuge” in Khamenei due to the pressures he’s facing from Reformists in the formation of his Cabinet. Reformists, in light of their crucial support for Rouhani, expect Cabinet positions, but Rouhani may be either unable or unwilling to deliver on those appointments. Rouhani's statement that he consulted with Khamenei over the future Cabinet suggests he might be seeking to shift the blame once he introduces a Cabinet without a significant number of positions allotted to Reformists. Abtahi urged Rouhani to stand his ground against Reformists and not drag Khamenei’s name into the quarrel.

Reformists are standing their ground or, at the very least, putting on a brave face. Iranian parliamentarian Bahram Parsaei, a spokesman for the Reformist Hope faction, said that while the Reformists supported the president in the election, “We will not give the president a blank check for any Cabinet combination.” Parsaei said that it was with the help of Reformists and former Reformist President Mohammad Khatami that Rouhani was able to acquire 24 million votes. He added that Reformists have “expectations” with the formation of the Cabinet.

News outlets and politicians have speculated about the composition of Rouhani’s second-term Cabinet. According to Fars News, Vice President for Administrative and Recruitment Affairs Jamshid Ansari said that a number of Cabinet members are returning, including Minister of Oil Bijan Zanganeh, Minister of Health Hassan Ghazizadeh Hashemi, Foreign Minister Mohammad Javad Zarif, Vice President for Executive Affairs Mohammad Shariatmadari and Minister of Roads and Urban Development Abbas Ahmad Akhoundi. No other source has confirmed this news. Justice Minister Mostafa Pourmohammadi told reporters Aug. 2 that he will not be returning.