Fresh controversy erupts in Iran with the arrest of the brother of the first vice president. 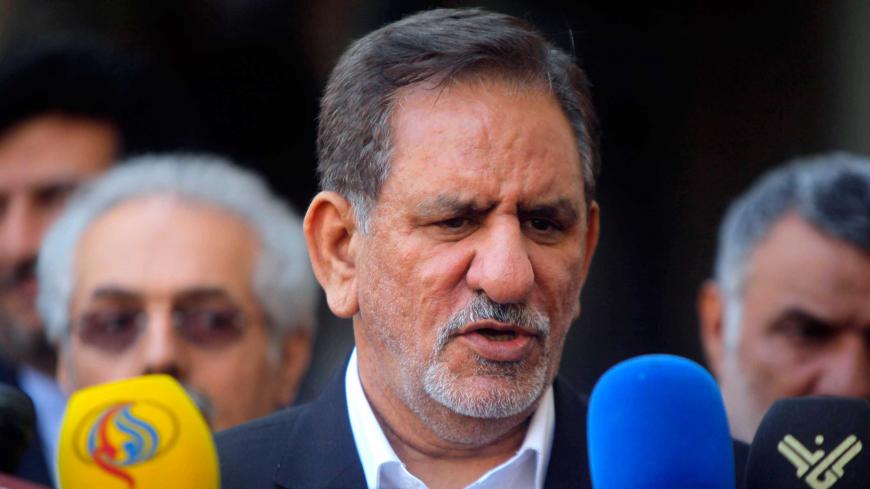 On Oct. 5, unconfirmed reports about the detention of First Vice President Eshaq Jahangiri’s brother surfaced in Iranian media. One day later, Jahangiri confirmed the reports, but distanced himself and President Hassan Rouhani’s administration from his brother, saying his brother never held a governmental position. While it may be true that Mahdi Jahangiri, the detained brother, had no position in government, he is known as one of the most prominent merchants in Iran and a founder of the Tourism Bank.

Hinting at the possibility that hard-liners have orchestrated the arrest of his brother for political purposes, the vice president said at a conference on Oct. 7, “There is no red line in countering corruption, and nobody should have immunity.”

He added, “Nobody has the right to take political revenge under the pretext of fighting corruption, and all the state institutions should act within the law.”

Jahangiri’s reference to the possible political motives behind his brother’s detention led the judiciary to adopt a harsh stance.

On Oct. 8, Prosecutor General Mohammad Jafar Montazeri reacted to the vice president’s remarks, saying, “When the judiciary is dealing with the former vice president [jailed Mohammad Reza Rahimi] and figures close to the former president [Mahmoud Ahmadinejad], as well as with the current government's entourage, they say that they are behaving with political motives.”

He continued, “If we wish to explain all the details of the case, the audience won’t just be the people, but the enemies would also have access to it. [Therefore], this is not the case, and the judiciary does not behave with political motives. Documents are available. [Whenever] the gentlemen find a tribune, they brand [our activities based on political motives], but they must know that the judiciary acts based on evidence.”

On the same day, without naming the vice president’s brother, judiciary spokesman Gholamhossein Mohseni Ejei disclosed the reason for the arrest.

“One of the people who was [engaged] in banking corruption was arrested recently. … He has more than $750 million of debt [to banks],” said Ejei.

In a direct hit at the vice president’s initial remarks about his brother not being involved in government, the judiciary spokesman stated, “The person who has this amount of debt definitely has power … and influence.”

Nobakht asserted that Mahdi Jahangiri’s detention and case had no relationship with the current government and that what he is alleged to have committed was done during Ahmadinejad’s presidency (2005-2013).

Meanwhile, on Oct. 10, a high-ranking commander of the Islamic Revolutionary Guard Corps (IRGC) announced that this military force had detained Jahangiri’s brother.

Describing Mahdi Jahangiri as one of the roots of corruption, Gen. Gholam-Ali Abu-Hamze said, “The brother of [Mahdi Jahangiri] says ‘they are seeking to take revenge’ instead of condemning what his brother has done.”

He added, “I announce clearly that the IRGC will act against anyone who wants to move in opposition to the people and the state, and we will go after every single one of them.”

It should be noted that Hossein Fereydoun, Rouhani’s brother, was also arrested recently and is now free on bail.