Turkish President Recep Tayyip Erdogan will meet with Iran's president and supreme leader in Tehran as high-level talks continue between historic rivals in the aftermath of the Kurdistan referendum. 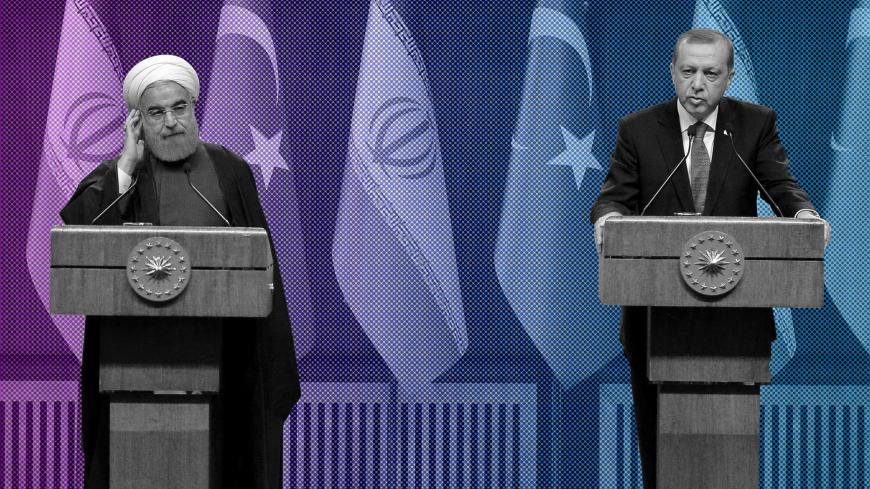 The visit follows a flurry of high-level exchanges between the historic rivals who seem united, at least for now, in seeking to reverse the referendum on Kurdish independence in Iraqi Kurdistan and to cement shaky “de-escalation” zones to end the conflict in Syria.

The state-run Anadolu news agency reported that Erdogan and Rouhani will chair the fourth meeting of the Turkey-Iran High Level Cooperation Council, which gathered for the first time in Ankara in 2014 to bolster trade ties between the region’s non-Arab heavyweights.

Turkey’s Chief of General Staff Hulusi Akar was in Tehran on Monday to reciprocate an August visit to Ankara by Iranian counterpart Mohammad Hossein Bagheri, the first such visit by an Iranian army chief since the 1979 Islamic Revolution.

In a joint news conference Bagheri said Iran and Turkey were “unanimous” in their determination to preserve Iraq’s territorial integrity and called the Iraqi Kurdish referendum “unacceptable.” Bagheri added that Turkey and Iran will collaborate in matters of military training and border security. They would also take part in each other’s war games, he said.

Yet, for all the recent mutual back-slapping, Iran and Turkey continue to disagree on a broad array of issues. Galip Dalay, the research director at Al Sharq Forum, explained in a recent essay, “This recent uptick in diplomatic activity should be seen in the context of a recent convergence of concerns and threat perceptions in the Middle East.” Dalay cautioned, “However, it should not be interpreted as anything more than that, as Turkey and Iran continue to have diverging, if not conflicting, interests, especially in Iraq and Syria.”

Still, Persian-Turkish hobnobbing is being observed with mounting worry in Iraqi Kurdistan as leaders from both sides keep up their calls on Massoud Barzani, Iraqi Kurdistan's president, to annul the referendum results. In a show of force, Iran and Turkey have deployed additional troops to the Iraqi Kurdish border and invited Iraqi forces to join in training drills.

Khamenei’s chief of staff, Mohammadi Golpayegani, has called the referendum a “Zionist plot,” a view that was echoed by Bagheri.

In Turkey, too, the pro-Islamic and nationalist media is awash with claims of how Barzani and his family are in fact crypto-Jews who are bent on establishing a “second Israel.” Israel is one of the few countries to say it will recognize an independent Kurdish state in Iraq.

An Iraqi Kurdish official told Al-Monitor on condition of anonymity the Iraqi Kurdish leadership had reached out to several ethnic Kurdish members of parliament in Erdogan’s ruling Justice and Development Party for their help. But so far, their intervention appears to have had little effect. This has further alienated pious, pro-Barzani Kurds who normally vote for Erdogan.

An unswayed Erdogan renewed threats to impose further sanctions on the Kurdistan Regional Government (KRG) if it failed to rescind the referendum, saying, “If they do not come to their senses, [sanctions] will grow.”

Erdogan was due to discuss such measures with his ally Devlet Bahceli, the leader of the far-right Nationalist Action Party, who is leading the chorus of xenophobic howls against the referendum.

Meanwhile, Baghdad, which shut Iraqi Kurdistan's airspace to international flights on Sept. 29, is continuing to pile on pressure as well.

The Kurdish news outlet Rudaw reported today that the Iraqi parliament had asked the country’s federal court in a letter to strip Kurdish lawmakers who backed independence of their parliamentary immunity. Iraqi Prime Minister Haider al-Abadi says he will not resume any dialogue with Erbil until the KRG cancels the results of the plebiscite, which was approved by a crushing 93% of voters. Reuters, quoting banking and government sources, reported that Iraq's Central Bank told the KRG today that it would halt selling dollars to four top Kurdish banks and stop all foreign currency transfers to the Kurdish zone. Yet Barzani shows no signs of cracking.

Many Iraqi Kurdish officials blame the United States for Iraqi intransigence. They insist Washington’s noisy campaign against the referendum has emboldened their enemies and deepened instability and that Washington stands to lose as well. The United States has several key bases in the Iraqi Kurdish territory and the CIA is known to run a huge regional intelligence-gathering operation out of the region. Moreover, the US-led anti-Islamic State coalition ferries arms and other critical supplies to their Kurdish and Arab allies in Syria via Iraqi Kurdistan.

Iraqi Kurdish officials aired hopes that Baghdad would reopen the airspace to allow the return of former Iraqi President Jalal Talabani’s body to his native Sulaimaniyah.

A larger-than-life figure beloved by journalists for his accessibility and sly wit, Talabani died in Berlin today after a long bout of illness. His death is expected to spark further infighting in the Patriotic Union of Kurdistan, the party he founded and led in opposition to Barzani’s Kurdistan Democratic Party.

Then again, in death Talabani may become a vehicle for unity among the Kurds and for cooling tensions with Baghdad, Iran, Turkey and the United States. All are expected to send emissaries to his funeral. Anadolu, quoting unnamed sources, said Erdogan had called Talabani's widow Hero today, offering condolences.