The Turkish president's Iran visit opened with a joint news conference in which he and Iran's president repeated Turkey’s demands that the Kurdistan Regional Government annul the results of the referendum on Iraqi Kurdish independence. 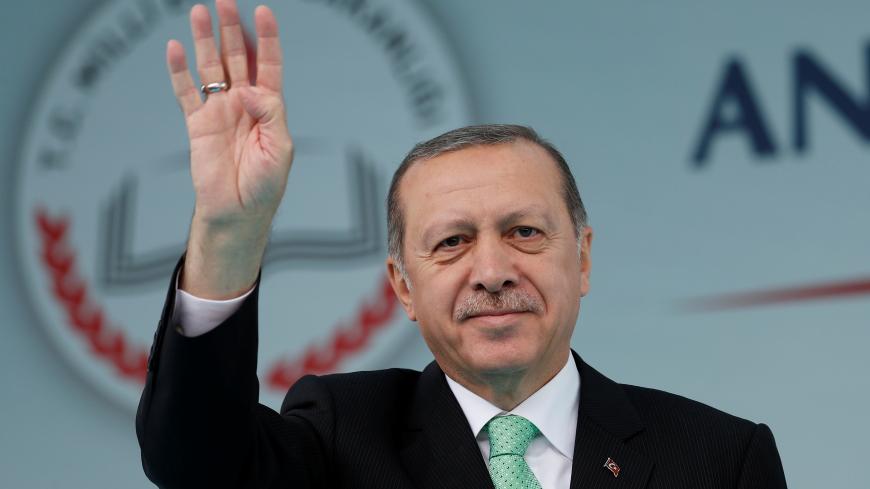 Turkey’s President Recep Tayyip Erdogan kicked off a high-profile visit to Iran today as both countries vowed to prevent Iraq’s Kurds from splitting away to form their own independent state and to boost economic ties.

Turkey’s Chief of General Staff Hulusi Akar, who has been in Tehran since Sunday holding talks on cooperation in Iraq and Syria, was among those to receive the Turkish leader at the airport.

At a joint news conference with his Iranian counterpart Hassan Rouhani, Erdogan repeated Turkey’s demands that the Kurdistan Regional Government (KRG) annul the results of the referendum on Kurdish independence that was held and overwhelmingly approved on Sept. 25. “There is no country other than Israel that recognizes it. A referendum that was conducted by sitting side by side with [Israel’s national spy agency] Mossad has no legitimacy,” he said. Erdogan warned of further “decisive steps” that Turkey, Iran and Baghdad might take if the KRG ignores their calls.

Rouhani concurred, saying, “Turkey, Iran and Iraq have no choice but to take serious and necessary measures to protect their strategic goals in the region,” and that “the wrong decisions made by some of the leaders of this region must be compensated for by them.”

There was nothing new in the calls, which are beginning to sound more toothless by the day. Turkey and Iran have yet to act on any of their threats to seal their borders with the Iraqi Kurdish region, halt trade or to take military action against it. The potentially harshest measure the Iraqi Kurds face is the insertion of Iraqi customs officials on their enclave’s borders with Turkey and Iran, a scheme that reportedly has the blessing of the United States as a face-saving way out for all sides.

Brett McGurk, the US presidential envoy to the anti-Islamic State coalition, is expected to return to Iraq sometime later in the month to try to bring the Iraqi Kurds and Baghdad back to the negotiating table. The United States was also fiercely opposed to the referendum on the grounds that it would weaken its close ally Iraqi Prime Minister Haider al-Abadi to the benefit of his pro-Iranian foes. Washington declared the results “illegitimate” but apparently lacks a clear plan to break the deadlock between the Iraqi Kurds and Baghdad, who are of equal strategic importance to its interests in the region. Abadi is demanding that KRG President Massoud Barzani scrap the referendum as a prerequisite for dialogue. Barzani insists the path toward independence will remain on the agenda in any bilateral talks.

The hope, at least in Ankara, appears to be that if Turkey repeats its demands enough times, Barzani, who championed the referendum as an irrevocable step toward full independence, will eventually crumple. Pro-government columnists have suggested that Ankara entertains the fantasy that the best way out of the current impasse is for Barzani to step down. Another idea being floated is for the KRG to void the referendum for the oil-rich province of Kirkuk. American pressure is seen as a prerequisite for any of these scenarios to materialize.

But there are no signs that the steely septuagenarian will budge. If anything, Turkey’s shrill reaction is helping shatter the Iraqi Kurdish opposition’s narrative that Barzani is a Turkish pawn and boosting his street cred among Kurds across the globe. At the same time, it is denting Erdogan’s popularity among his own Kurdish constituents, which may explain why he has softened his tone if not his message to the KRG. Barzani, for his part, is betting that when push comes to shove, his foes lack the stomach to act on their threats and that the best course of action is to stick to his guns and wait for the clamor around the referendum to die down. As ever, the biggest challenge remains the divisions among the Iraqi Kurds themselves.