Why is Baghdad paying salaries of Kurdistan employees?

Amid ongoing disputes between Kurdistan and the Iraqi federal government, Baghdad announced that it is going to bypass the Kurdistan Regional Government and pay their civil servants directly. 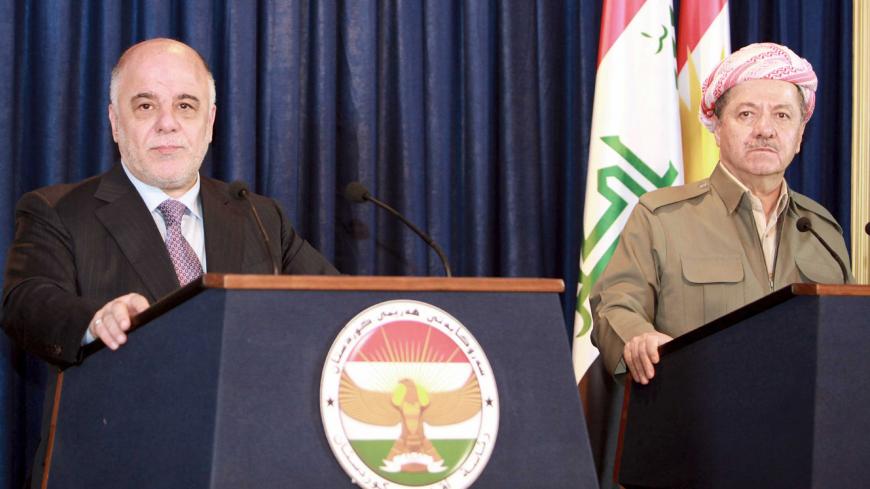 BAGHDAD — Iraqi Prime Minister Haider al-Abadi intends to have the federal government adopt a policy of paying civil servants’ salaries in Iraqi Kurdistan without mediation from the Kurdistan Regional Government (KRG). This is considered a substantial improvement in the relationship between the federal government and Kurdish citizens in Iraqi Kurdistan, and the move is expected to strike at the very heart of Kurdistan’s economy and undermine Erbil’s authority, as it cannot refuse such an offer.

Parliament member Jassim Mohammed Jaafer — who is close to Abadi — announced Baghdad’s intention to pay the salaries of Iraqi Kurdistan’s civil servants. He told Al-Monitor, “Prime Minister Abadi is serious about this plan, and he continues to be so even after the Kurdish government decided to freeze the independence referendum results on Oct. 24, 2017 — especially now that Kirkuk’s oil fields are under Baghdad’s authority.” Jaafer revealed that about 10 oil fields in Kurdistan are expected to have their revenues included in the federal budget to complete the plan, which he expects to be ready in the near future because the federal government has decided that “Kurds should not be deprived of their political, financial and administrative entitlements stated under the constitution.”

Concerning implementation of the plan, Jaafer said the technical system is ready to distribute salaries through the QiCard system, which is currently used in Iraq. “We are waiting for the Kurdish government to send the database of employees and peshmerga personnel so that the QiCard system can be instructed to integrate databases of the Kurdish employees as well as peshmerga personnel to receive their salaries at any of the company offices inside or outside of Kurdistan,” Jaafer added.

QiCard is an electronic payment system through which employees in Iraq get paid through an electronic card following the government’s deposit of their salaries into their respective accounts. Employees can then withdraw their salaries from any of the 200 exchange offices around Iraq.

Majda al-Tamimi, a lawmaker and member of parliament’s Finance Committee, explained to Al-Monitor that the plan can now be applied "since oil sources have come under the authority of the federal government. The Oil Marketing Company SOMO controls the production as well as the export, which brings the required financial revenue to the federal government, allowing payment of salaries in Kurdistan from Baghdad without any financial mediation from the [KRG].”

Concerning the method of applying the plan announced by Abadi, Tamami said, “The Kurdistan salaries committee, of which I’m a part, will discuss the means to implement the new plan with the Ministry of Finance and will look for ways to overcome any difficulties in cashing salaries in Kurdistan. Moreover, the new plan does not need the parliament’s vote, as the prime minister has agreed to it.”

Tamimi seemed confident of success, adding, “I’m sure the federal government seeks to secure salaries of Kurdistan because these employees are Iraqi employees in the end. Moreover, the peshmerga [forces] are a part of the Iraqi security and defense architecture under Article No. 121 of the Iraqi Constitution. Therefore, cashing their salaries from Baghdad is required under the applicable laws.”

By the end of 2014, the KRG had entered into an oil agreement with the Iraqi federal government, which stated that Kurdistan’s entitlements should be reimbursed in exchange for delivering 550,000 barrels of Kurdistan's and Kirkuk’s oil to the federal government each day. However, disputes pushed former Prime Minister Nouri al-Maliki to announce on Nov. 17, 2016, that a 17% share of the central government’s budget that was dedicated to Kurdistan would be cut off due to the KRG’s lack of commitment to the oil agreement.

The plan of direct payment of salaries to Kurdistan is not a new one, as Abadi proposed the same plan to Iraqi Kurdistan in 2016 in exchange for the delivery of Kurdish oil to Baghdad. KRG authorities refused that offer, which has automatically expired now that the Kirkuk oil fields are under the authority of the federal government.

“The salary crisis was one of the aspects of the economic crisis sweeping through Kurdistan before the Iraqi army seized control of the city during the battle of Kirkuk. The obvious truth is that the KRG has failed to secure salaries of employees,” Zana Saied, a member of the Iraqi parliament, told Al-Monitor. The reason is corruption, said Saied, adding, “Exporting about a million barrels each day should have made Kurdistan able to provide salaries and many other financial needs.”

Many people consider the federal government to be waging an economic war on Kurdistan. Jassim al-Mossawi, a political analyst and the head of the Arrasid Center for Media, spoke to Al-Monitor about the political influence used to distance Kurdish authorities from administering salaries to employees, which makes Kurdish citizens feel that “Baghdad is their federal capital as it controls the very details of their lives.” It is expected that Kurdish authorities will be compelled to accept the plan given the financial crisis it is going through, according to Mossawi.

The rising economic hardships imposed on the region by Baghdad and neighboring countries indicate that the salary issue will be solved soon in the favor of Baghdad's plan.