The federal government in Baghdad seeks to extend its full control over all oil wells in the disputed areas between Baghdad and the Kurdistan Region, even those within the region. 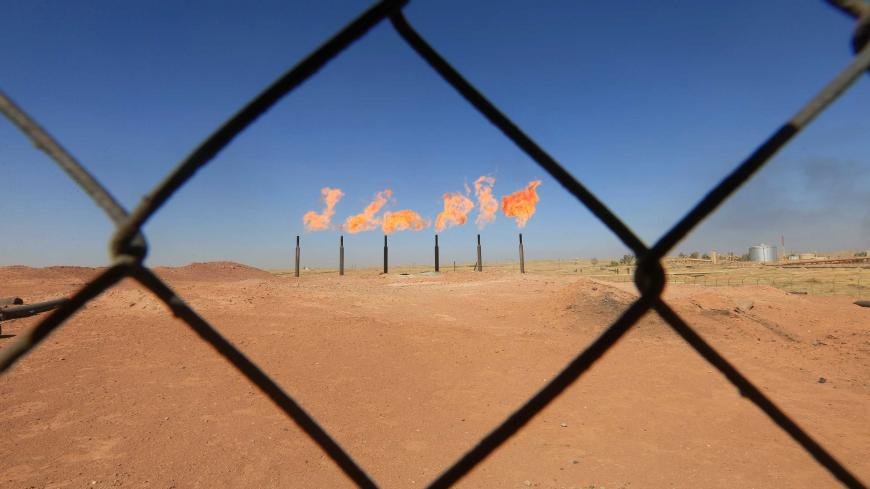 Flames emerge from flare stacks at the oil fields on the outskirts of Kirkuk, Iraq, Oct. 17, 2017. - REUTERS/Alaa Al-Marjani

The Iraqi State Organization for Marketing Oil (SOMO) announced Nov. 2 that it is arranging with Turkey to allow SOMO to sell Iraqi crude from the disputed territories through the pipeline from Kirkuk to the Ceyhan Turkish port. The Kurdistan Regional Government (KRG) used to export about 500,000 barrels per day independently through Ceyhan before the Baghdad operation to retake the disputed areas in mid-October.

It was not long after the Iraqi army took over the oil fields in Kirkuk in a military operation to “impose security,” as described by Prime Minister Haider al-Abadi, that the federal government resumed oil pumping operations. The operations started about a week after the clashes between governmental forces and Kurdish peshmerga forces. Meanwhile, the Ministry of Oil rushed to increase oil production, and on Oct. 23, the ministry requested the help of the British petroleum company BP in increasing production in Kirkuk oil fields to more than 700,000 barrels per day. The ministry also announced the formation of a ministerial committee to advance the oil industry in the province of Kirkuk.

Kirkuk has more than 35 billion barrels in oil reserves and a production capacity ranging from 750,000 to 1 million barrels per day. The federal government seems determined to control the oil sources, especially in Kirkuk and the disputed areas. In light of this, on Oct. 19, the Iraqi minister of oil warned all countries and international petroleum companies against signing contracts with any Iraqi party without first consulting the federal government.

Spokesman for the Ministry of Oil, Assem Jihad, told Al-Monitor, “The federal government should control the oil wells, even those in the Kurdistan Region, which is seeking independence. The Iraqi Constitution states that all oil sources must be under the control of the federal government.”

Jihad emphasized, “The government’s control of oil wealth does not mean a certain national party will monopolize the sector. All oil resources will be fairly distributed among the people.”

He said, “Oil fields, mainly Bay Hassan and Havana in Kirkuk, are managed by the North Oil Company affiliated with the federal authorities and working under the supervision of the Ministry of Oil. No other company is allowed to operate there without the approval of the federal government.”

Iraqi Kurdistan still exports oil to the Turkish Ceyhan port in the framework of old agreements. Kurdish oil exports range from 220,000 to 240,000 barrels a day. Therefore, the KRG might seek joint control of Kirkuk’s oil in the future. However, Jihad warned that “any oil exportation without the knowledge of the Ministry of Oil would be considered smuggling punishable by law.”

Jihad added that sharing control of Kirkuk’s oil “should be decided by the federal government rather than the Ministry of Oil, which is only an executive party.” He noted, “The Ministry of Oil is waiting for the government’s decisions and policies in this regard.”

Al-Monitor asked Jihad whether the restoration of an oil pipeline far from the Kurdistan Region’s territories through Mosul to Turkey would constitute a step on the road to ending the KRG’s role in any oil exportations. He answered, “The idea of such a pipeline is not new. It is the main pipeline to transfer oil, and it stopped working after the Islamic State attacked Mosul and the areas in north and west Iraq in 2014. Now, after the liberation of Mosul and other regions, the government is bent on restoring the pipeline as a main exportation means from Kirkuk to Ceyhan, passing through Salahuddin and Ninevah.”

He added, “This pipeline feeds the Baiji oil refinery.”

Although the federal government’s control of Kirkuk will halt many oil-smuggling operations and exportations that do not have the federal government’s approval, this step puts into question the future of oil contracts that the KRG signed with international companies. Those include Iraqi Kurdistan’s contract with the Russian Rosneft Oil Company, signed a few days before the Kirkuk incidents to drill oil in five different locations in Iraqi Kurdistan. As per this agreement, the KRG got $2 billion to curb its budgetary deficit.

Majida al-Tamimi, who is a member of the Iraqi parliament’s fiscal committee, told Al-Monitor, “Any contract that does not go through the parliament or that is signed without the knowledge of the federal government is illegitimate.”

Tamimi said, “In the 2018 budget, the Kurdistan Region’s name was replaced for the first time in budget charts with the name 'northern provinces,' indicating that the parliament and government are politically willing to take away as many privileges as possible from the Kurdistan Region, including oil exportation.”

Although many expected Kirkuk to be a bloody battlefield, the federal government’s takeover was smooth. Therefore, oil production will be more competent and prolific. The government is bent on developing facilities and has promised to distribute oil revenues fairly among citizens, including the Kurds in Iraqi Kurdistan. The government asserted that it would pay the Kurdistan Region’s employees’ salaries if it takes control of all the oil fields.

Oil wealth is past the danger stage of causing a war. Eyes are now set on the way the federal government will distribute oil wealth and whether it will indeed be fair to all Iraqis.