Oil deal a sign of hope between Baghdad, Erbil

An oil agreement signed by the Iraqi and Kurdish governments over the management of oil proceeds could be a new step in the normalization of relations between them. 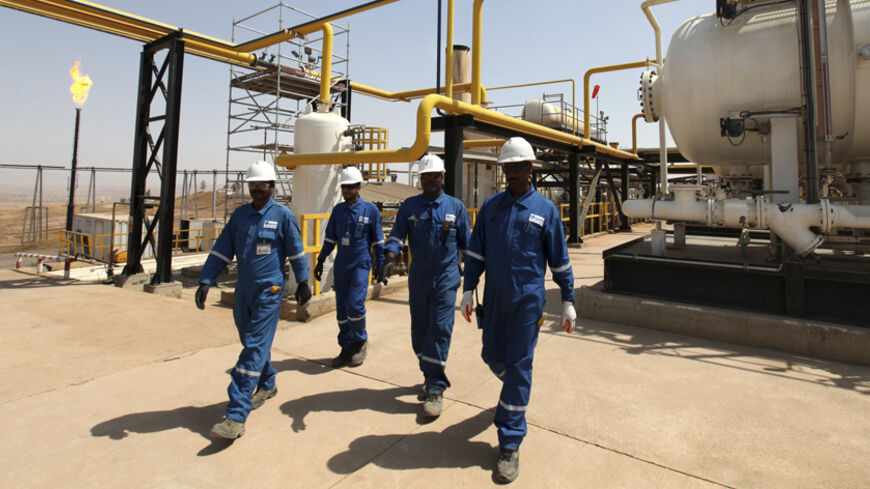 As soon as the oil agreement signed Dec. 2 between the Iraqi government and the Kurdistan Regional Government (KRG) was announced, optimism emerged in Iraqi and international circles, which considered the agreement to be the gateway to achieving a comprehensive Iraqi reconciliation. The agreement put an end to years of conflicts over the mechanisms of oil investment and export, yet certain political parties expressed doubt, to a point where State of Law Coalition representative Hanan al-Fatlawi described the agreement as being a “national disaster.”

The agreement was signed in Baghdad by KRG Prime Minister Nechirvan Barzani and Iraqi Prime Minister Haider al-Abadi on Dec. 2. It states that the KRG should send 250,000 barrels of oil per day to the Iraqi government, and it should export 300,000 barrels of Kirkuk oil through the KRG-Turkey pipelines. In return, Baghdad will give the KRG its share of the Iraqi budget, amounting to 17%, in addition to sending support for the Kurdish peshmerga forces in terms of armament and salaries, considering them part of the Iraqi defense system.

Immediately after this announcement, the agreement received international support. US Secretary of State John Kerry described it as “a step forward in achieving stability in the region,” stressing that “the US has a great interest in the progress made by Abadi’s government.”

The Iraqi Oil Ministry told Al-Monitor there was confusion over the interpretation of the export of Kirkuk oil, as stipulated in the agreement. The ministry’s spokesman, Assem Jihad, said Kirkuk's oil production would be under the supervision of the North Oil Co., and that the current production plan aims at exporting 300,000 barrels per day through the KRG. In addition, a portion of the production will be transferred to the Baiji refinery.

Jihad considered the agreement “an important step to be closer to the KRG and overcome the pending issues.” He said, “The agreement will allow benefiting from the Kirkuk oil production, which has stopped months ago, in addition to benefiting from the oil extracted from the KRG’s fields. This agreement will address the crisis the country is currently facing as a result of the decrease in oil prices around the world.”

He said that committees were being formed to discuss the pending issues between the KRG and Iraq and that the oil agreement was a sample gateway to resolve the rest of the accumulated differences between the two parties.

Jihad said he does not currently expect Kirkuk oil production to exceed 300,000 barrels per day, since the previous export rate did not exceed this figure. He said the agreement was subject to the 2015 budget, and in the event of increases in Kirkuk's oil production, it would be taken into account in future budgets. He said the Iraqi government has already contracted with the British company BP to prepare studies on oil development in Kirkuk, which would allow production in oil fields to increase.

Jihad denied that the agreement was a substitute for the "oil and gas law," and said, "This law and others related to the oil issue, are being prepared in the Cabinet and will soon be transmitted for approval in the parliament to regulate the management of the oil wealth with the KRG and other [oil]-producing governorates. Iraq still needs laws to regulate oil and gas management.”

Article 112 of the Iraqi Constitution stipulates: “The federal government, with the producing governorates and regional governments, shall undertake the management of oil and gas extracted from present fields, provided that it distributes its revenues in a fair manner in proportion to the population distribution in all parts of the country, specifying an allotment for a specified period for the damaged regions, which were unjustly deprived of them by the former regime, and the regions that were damaged afterward in a way that ensures balanced development in different areas of the country, and this shall be regulated by a law.”

Meanwhile, Barzani denied that the agreement signed between Baghdad and Erbil happened under external pressure, and stressed that Washington, London and the United Nations were encouraging both parties to sign the agreement.

However, the economic version of the agreement does not seem separated from the political version. It seems to be a response to the complex conditions of the relationship between Baghdad and Erbil. As a result, the salaries of KRG employees were not paid during the last few months of the former Iraqi government’s mandate. In addition, it led to political estrangement between both parties and the exchange of nonstop accusations in recent years. It also represents a response to the reality of the common threat posed by the Islamic State on both parties.

The optimistic aspect in this oil agreement is that compromise is still possible in Iraq, despite the security situation and the political and economic challenges. In addition, intentions of resolving issues instead of resorting to aggravation can actually lead to a fair solution.