As the Erbil-Baghdad oil controversy drags on, it remains unclear how ties will be affected between Ankara, Erbil and Baghdad. 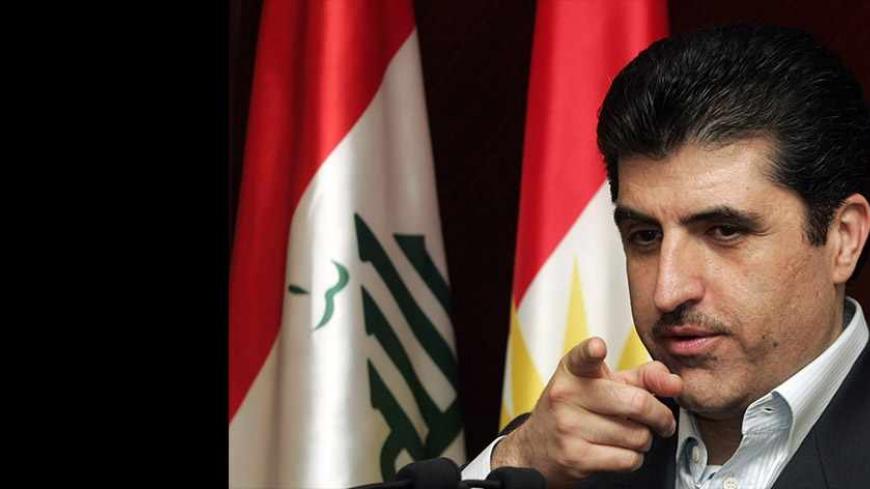 Have Baghdad and Ankara agreed to resolve the Kurdish oil issue? Has Baghdad agreed with Erbil to settle the dispute that broke out after the latter concluded a contract to independently export its oil to world markets? Or has it not? The reality on the ground does not indicate that there is a real agreement on settlement, but rather shows that things are left pending, perhaps until the elections are over, making the only agreement on the absence of an agreement.

A prominent Iraqi politician who is close to the decision-making sources in Baghdad spoke of this vision to Al-Monitor and tackled the consequences of the crisis that began with the announcement of the visit of the Kurdistan Regional Government Prime Minister Nechirvan Barzani on Nov. 27 to sign contracts to ship oil from the region to Turkey via a pipeline that has been established for this purpose.

He also addressed the wide range of reactions in the Iraqi government, which rejected the agreement and deemed it to be unconstitutional.

“The clarification sent to the Kurdistan region confirmed that any oil deal would be unconstitutional and noncompliant with the Budget Law and the Financial Administration Law,” he added.

Deputy Prime Minister for Energy Hussein al-Shahristani announced, “The government is entrusted with the wealth of the country and cannot remain silent when the Kurdistan region['s] oil is being exported without its consent.”

For its part, the Kurdistan region confirmed that the contracts are constitutional and that Shahristani cannot intervene to determine the policy of the region's oil.

The developments, however, were not quite clear, as neither the text nor the details of the deal had been announced until Dec. 1, when Turkish Energy Minister Tanz Yildiz arrived in Baghdad. Yildiz made a quick visit to the city to reassure Baghdad about the Kurdish-Turkish deal arrangements prior to attending an energy conference held on Dec. 2 in Erbil, the capital of the Kurdistan region of Iraq.

The Deputy Prime Minister for Energy, Hussein al-Shahristani, said on Monday, Dec. 1, that he signed an agreement with the Turkish Energy Minister, whereby the federal government has to approve any oil exports from anywhere in Iraq. This was confirmed by Yildiz, who also said, “Turkey will ask for the approval of Baghdad on the commercial export of oil from the Kurdistan region of Iraq.”

“The two parties have also discussed a current plan to establish a pipeline to transport crude oil from oil fields in Basra in southern Iraq to Turkey,” he added.

On the same day, the Turkish minister left Baghdad to Erbil to attend an energy conference organized by the Kurdistan Regional Government (KRG), with the participation of active oil companies. The KRG’s prime minister said in a statement that the new contracts signed by Kurdistan serve the interest of Iraq.

This entire controversy, however, has failed to show whether Baghdad accepts or rejects those contracts. The Iraqi government source told Al-Monitor, “The governmental atmosphere that followed the conclusion of oil contracts was tense and angry in Baghdad. This anger was not assuaged by the Turkish minister’s visit, but by other political calculations.”

There is a perpetual problem regulating Baghdad’s relationship with Erbil, and each side accuses the other of causing this problem, knowing that there is a history of mistrust between the two parties. This mistrust is partly due to Iraqi Kurds feeling that the political experiment that took place after 2003 and the gains that they got from this experience were not enough to reassure them about the future, following decades of injustice and tyranny on the hands of successive governments in Baghdad.

One must also take into account that there are thorny issues pending between the two parties, such as the disputed areas which inevitably deepen mutual suspicions. The reality on the ground suggests that since 2003 Baghdad has not offered enough evidence of its willingness to learn from the experience of the region.

Beyond the political factor of the crisis, there is an institutional factor, since the administrative, investment and economic experience of the region currently looks like it has made great progress in overcoming bureaucratic obstacles that still shackle Baghdad. Still, the Iraqi government wants to hinge the outcome of this crisis on political considerations alone.

Economic rhetoric is taking place between the two parties in two completely different ways. The style that led the Kurdistan region to the point of oil export today initially went through early decisions a few years ago, independently taken to conclude contracts with international oil companies. These have been concluded through mechanisms that are different from those concluded by the Iraqi government within its different licensing rounds. These contracts still have not been approved by Baghdad to this day, as evidenced by the non-inclusion of the dues of the companies within the Iraqi budget.

The Minister of Energy and Natural Resources in the Kurdish region implicitly referred to this problem. During the energy conference held Dec. 2, he said the region was currently capable of exporting 300,000 barrels per day through the newly established pipeline with Turkey. He added that the region would be able to export 1 million barrels in 2015.

According to high-ranking Kurdish politicians, these ambitious figures would not have been achieved had it not been for the early steps taken by the region in its previous oil contracts. It should be noted that the region — which, back in 2003, was not expected to be among the areas where large oil quantities would be found, since it did not have confirmed large oil fields — managed to achieve a production level that will reach as many as 1 million barrels [per day] in 2015. This comes at a time when the production of the Iraqi Oil Ministry is still below 2.5 million barrels per day and is expected to reach 3.5 million barrels in the same period in previously explored fields comprising huge oil stocks.

Views in the Kurdistan region on Baghdad’s position on the recent deals focus on “resolving the crisis.” The recent contracts that were widely understood as a start to a crucial trip of the region’s disintegration from Iraq and declaration of an independent state, are deemed by Kurdish officials who spoke to Al-Monitor as an effort to impose solutions to the years-long financial confusions with Baghdad about the budget, the dues of oil companies and the salaries of the Peshmerga forces, among other issues.

If we take into consideration the recent Kurdish viewpoint and exclude the political nature of the last decades, we find that the region has actually imposed its own mechanisms on Baghdad to resolve its accumulated crises with the central government. This is especially the case considering that the recent agreement with Turkey indicates oil proceeds are deposited in a Turkish governmental bank until an agreement is reached with Baghdad and Erbil.

But the negotiations between Baghdad and Erbil about the region’s budget and the dues of the companies will not be as good as they were before the conclusion of the agreement. Today, the Kurdistan region has imposed different negotiation mechanisms with Baghdad over its budget and its funds.

Apart from the conflicting assessment of the region’s recent step, and away from the accusation of a number of politicians in the Baghdad region of “wasting the wealth” and “disrespecting the constitution,” many questions are raised in this regard.

Was the Iraqi government truly surprised by the recent deal, knowing that news of the Kurdistan-Turkey pipeline broke almost a year ago?

It was most likely not surprised by the recent developments, particularly since it has insisted on not paying dues to oil companies in the 2013 budget. This move has represented a clear threat to Kurdistan’s aspirations to expand its oil production.

Surprisingly, the strict talk by government officials in Baghdad regarding those contracts has decreased, following the Turkish energy minister’s visit, instead taking on the form of an announcement that oil will not be exported without the consent of the oil ministry in Baghdad. This, however, has not taken care of the political situation, to the effect that the Kurdistan region has concluded the contracts alone without referring to the federal government in Baghdad.

There is no actual oil agreement except for an implicit and general one to the effect that the status quo shall continue until after Iraqi elections next April. Meanwhile, the Iraqi government continues to reject contracts and the Kurdistan region reserves the right to export, waiting to see how the Iraqi government will deal with Kurdistan’s financial demands.

This is exactly where the complexity of the different ​​economic and political languages used between Baghdad and Erbil resides. The latter is looking for and implementing solutions on the ground, and does not wait for electoral or political considerations to get its interests. The former is politically and hypothetically dealing with the events, both exacerbating and controlling the situation at once, be it through elections or regional and international events.

The Kurdish oil controversy would not have become a crisis in and of itself had the bridges of trust and strategic cooperation been built between Baghdad and Erbil earlier. There is no point in trying to force the Kurdistan region to experiment amid the destruction of the Middle East, to adhere to work procedures and mechanisms that date back to the past and have controlled the other parts of Iraq and obstructed any attempt to promote it.

Taking advantage of the Kurdistan region’s experiment, cooperating with it, containing and developing its economic aspirations, attempting to dissipate fears and doubts, and finding joint work mechanisms is a way toward ensuring an eventual joint language between Baghdad and Erbil.