The ongoing dispute over oil between the central Iraqi government in Baghdad and the Kurdistan Regional Government in Erbil has intensified, writes Omar al-Shaher. 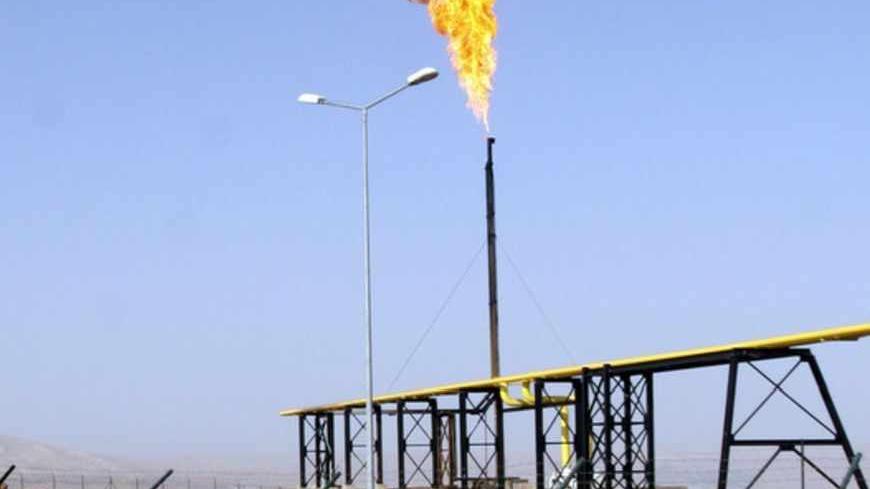 A flame rises from a pipeline at Taq Taq oil field in Erbil at the semi-autonomous Kurdistan region of northern Iraq, about 350 km (220 miles) north of Baghdad, Sept. 5, 2012. - REUTERS/Azad Lashkari

The crisis between Baghdad, the Iraqi capital, and Erbil, the capital of the semi-independent Kurdistan Region in the north, has escalated. Iraqi Deputy Prime Minister Hussein al-Shahristani, one of Prime Minister Nouri al-Maliki’s strongest allies, said that the federal government will consider the region’s oil exportations that it is uninvolved with to be “smuggling operations.”

During a gathering in the Al-Rashid hotel in the Green Zone in Baghdad, Shahrastani added that some quantities of oil are exported by the Kurdish government without the knowledge of the federal government, and he promised to halt these operations.

“Baghdad will consider such operations to be ‘smuggling,’ in the future,” he indicated.

Shahrastani is the Kurds’ worst enemy in Baghdad. Consequently, the Kurds promised Maliki to give the current government their vote of confidence, provided that Maliki distance Shahristani from handling the Ministry of Oil, which he formerly headed.

Many issues between Baghdad and Erbil remain unsolved, including the dispute over oil. Iraq’s Kurdistan Region wants to manage the oil quantities produced by its three provinces, while Baghdad refuses to grant the region the right to export its oil directly. Instead, Baghdad requires oil to be exported following a centralized system.

The Iraqi constitution stipulates that the federal government’s privileges allow it to manage the country’s resources. However, the Kurdistan Region claims that Baghdad does not allocate sufficient funds to it in Iraq's annual budget, and therefore, the region is trying to benefit from its own oil production.

While Erbil asserts that the region’s oil imports help stock the central government’s treasury, the federal Ministry of Oil believes that the contracts signed by the Iraqi Kurdistan Region favor the companies concerned in these deals.

At the beginning of this year, Baghdad noted that Erbil had indeed exported oil to neighboring Turkey. However, the Iraqi Kurdistan Region noted that the alleged exportations were in fact oil to Turkey in return for oil derivatives, such as gasoline and white oil, to meet local consumption needs.

During a recent visit to Turkey, Prime Minister of the Iraqi Kurdistan Region Nechirvan Barzani announced that Erbil is determined to export three million barrels of crude oil daily, after completing a pipeline extending from Kurdistan to Turkey.

At the beginning of the year, a Turkish company began construction on an oil pipeline that connects the region to neighboring Turkey and that will become operational by the end of the year.

The conflict between Baghdad and Erbil regarding oil has intensified during the past few months, when the federal government threatened the American company ExxonMobil with baning it from making any future investments in Iraq if it cooperated with the Kurdistan Region. Consequently, ExxonMobil suspended the drilling contracts it had signed with Erbil.

In the latest developments of the conflict between the federal government and the Iraqi Kurdistan Region, the Iraqi parliament voted on the country’s general budget for the year 2013 without including the $4 billion in dues owed to foreign oil companies operating in the region.

Baghdad took another measure that enraged Erbil even more. The oil minister in the federal government recently announced that his ministry is examining offers from global oil companies — including BP and Schlumberger — to develop an oil field that is situated in Kirkuk, a city rich in oil and fought over by Arabs and Kurds.

The Kurds claim that they have historic rights in Kirkuk, and they are seeking to make it part of the region’s provinces. While the Iraqi constitution includes a clause that ostensibly determines the way to solve the conflict over Kirkuk, it is not effective due to disputes regarding its implementation mechanisms.

Kurdish MP Farhad Atrushi says that “this step aims to pressure Kurdistan, since Kirkuk’s oil fields are an extension of Erbil’s. There is a political message here that conveys that this area will not be returned to the Iraqi Kurdistan Region.”