The Iraqi government has drawn up plans to increase the country’s oil production capabilities over the next decade, writes Omar al-Shaher. 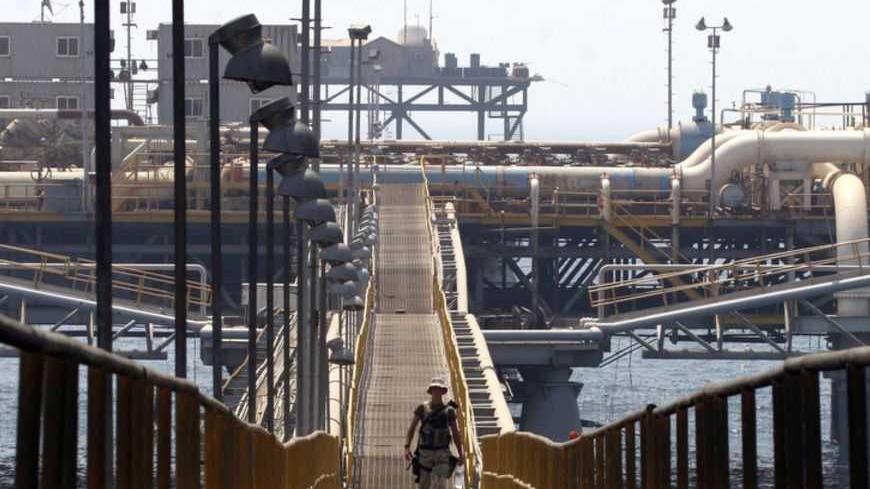 A soldier walks on the platform of the Basra Oil Terminal, 12 nautical miles off the Iraqi coast in the waters of the Northern Arabian Gulf, close to the port town of Umm Qasr, Aug. 8, 2006. - REUTERS/Thaier Al-Sudani

The Iraqi Oil Ministry has said that the country's export capacity will reach 7 million barrels per day by 2015, while the parliamentary Energy Committee believes that the size of Iraq's oil exporting capacity is still below the upper limit set by the Organization of Petroleum Exporting Countries (OPEC).

Abdul Mahdi al-Amidi, a senior official in the Iraqi Oil Ministry, said that his country will be able to export more than 7 million barrels a day in 2015, after construction is completed on offshore rigs at the end of this year. Amidi said that the oil ministry would be able to deal with these quantities for transfer and export.

Amidi said that the production and export of crude oil is subject to the ministry's plans and programs, which, in turn, are subject to a number of variables. He added, "The ministry is working to develop the necessary infrastructure to help them transport, store and export crude oil."

There is much uncertainty surrounding Iraq's export potential, while local experts believe that the country will not be able to cope with the large increase in oil production that is expected over the next two years.

Many of Iraq's plans to build offshore rigs in the Persian Gulf — along with projects aimed at laying new pipelines to export outlets in Turkey and Jordan — have been at a standstill for years as a result of bureaucracy.

Amidi said that the doubts concerning Iraq's ability to export projected production quantities are "inaccurate." He added, "The indicators announced by international organizations draw their information from the Ministry of Oil and the official Iraqi authorities."

Iraqi Oil Minister Abdul Karim Luaibi said, "Iraq is confident of its ability to export all projected increases in production this year."

Since 2010, Iraq has signed many contracts with international companies to develop a number of oil fields, and has previously announced its intent to produce 6 million barrels of oil per day by 2017. These contracts have pushed the Iraqi Oil Ministry to implement a plan aimed at increasing the country's export capabilities. The first stages of this plan involve projects to build new pump tanks at the coastal warehouse in Faw, and to extend two pipelines including 20 km [12 miles] on land and 120 km [75 miles] under water. Once these pipelines have been completed, they will be linked to three offshore rigs.

In October 2011, the state-owned South Oil Co. signed billion dollar contracts with two companies — one Australian and the other Italian — to install two offshore rigs, lay an underwater oil transport pipeline, and erect a platform for valves and meters. These contracts came in light of an expected increased in Iraq's export potential through the Gulf to 6 million barrels a day after three years.

The parliamentary Energy Committee believes that the amount of oil the country exports is still less than the upper limit set by OPEC, and that Iraq is capable of increasing its exports in the future.

Susan Saad, a member of this committee, said, "Iraq has not reached the upper limit for export set by OPEC, which is designed to balance supply and demand in world markets."

She added that Iraq could receive special exceptions to raise export capacity as it deems appropriate, given the country's need for oil revenue.