The economic sanctions that Turkey threatens against the Iraqi Kurds have sparked anxiety inside its own borders, where many depend on bilateral trade to make a living. 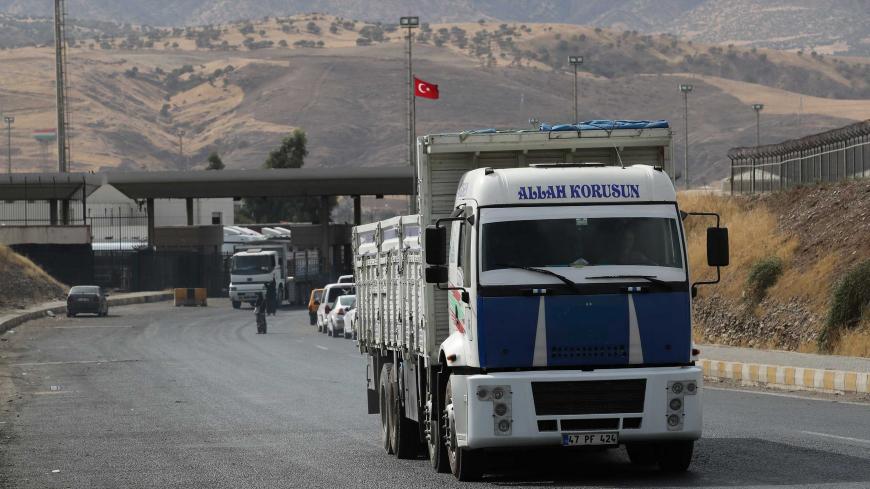 SILOPI, Turkey — In a barrage of warnings to Iraqi Kurds over their independence vote, Turkey has threatened a series of sanctions, including the closing of the Habur border crossing between the two sides, a key economic lifeline for the Kurdistan Regional Government (KRG). Whatever worries the warning may have sparked in the KRG, jitters are running high on the Turkish side of the border where millions rely on the Habur route to make a living.

As Iraqi Kurds went to the polls Sept. 25, Turkish tanks maneuvered at a stone’s throw from the border, outside the town of Silopi, fueling apprehension among local Turkish Kurds and drivers on their way to and from Iraq. “What will happen to Habur?” three young men anxiously queried reporters, fresh from a drive to Iraqi Kurdistan with a stash of cheap cigarettes to resell at home.

Soon, their mood sank further as news broke of Turkish President Recep Tayyip Erdogan saying the border crossing would be closed within days. “Time to get packing. If Habur closes, we’ll probably go to Antalya, Izmir or Istanbul to work,” the driver of the group said, referring to cities in western Turkey where millions of Kurds from the impoverished southeast migrate to earn a living.

“If Habur closes, countless people will be affected — from the street vendor at the border crossing to the holding [owner] in Istanbul. Millions of people earn their bread from here,” he said. “Look at me, for example. I took passengers [to Iraqi Kurdistan] this morning and brought cigarettes on the way back. What are we going to do if this becomes impossible?”

Truck drivers carrying goods to Iraq were also on edge, irked by the media flurry at the border crossing. “If you write too much about it, they will close it in the end,” one driver scolded reporters.

The Habur gate is Turkey’s only border crossing with Iraq. Most of the trade that goes through Habur is with Iraqi Kurdistan, which makes it a trump card in Ankara’s eyes.

According to figures by the Turkey-Iraq Industrialists and Business People Association (TISIAD), Turkish exports to Iraq through Habur hit $12 billion in 2013 before falling to $10.8 billion in 2014, $8.5 billion in 2015 and $7.6 billion last year amid turmoil inside Iraq. This year’s figures seemed to raise the spirits again. In the first half of 2017, exports reached $4.5 billion, a 30% increase from the same period last year.

Economic gains from those exports, however, are not limited to their producers, as thousands of small businesses and shops benefit from the traffic along an 800-kilometer (497-mile) route, stretching from the border to Turkey’s Mediterranean city of Mersin, a major industrial hub.

In Silopi, almost all locals seem to rely on Habur for their livelihoods, from restaurateurs and hoteliers to small shopkeepers and auto mechanics. A signboard just outside the border crossing advertises a hotel in Diyarbakir, Turkey’s largest Kurdish-majority city some 300 kilometers away, illustrating how far Habur’s economic promises go. Besides the hotels, scores of roadside diners, shops and auto services cater to truck drivers and other travelers on the route.

Salman Sumbul has earned his living as a truck driver between Turkey and Iraq for almost three decades, having seen Habur sealed a number of times over the years. He hopes politicians will find a way to resolve the crisis. “We want peace. They should talk and come to an understanding,” the 48-year-old told Al-Monitor. “The border crossing should not be closed. So many people — from Silopi to Adana — make money from here to feed their families.”

According to TISIAD head Nevaf Kilic, Turkish trucks make about 700,000 runs through Habur annually and an estimated 20 million people benefit from the trade, directly or indirectly. “We are absolutely against politics affecting trade. Iraq is our No. 1 trade partner among neighboring countries and the second-largest buyer of our exports after Germany,” he told Al-Monitor. Closing Habur would have serious consequences for Turkey itself, he warned. “Many regions — the southeast in the first place but also provinces such as Mersin, Karaman and Kayseri — would be affected. More than 50% of what is produced along this route is being exported to Iraq.”

Kilic stressed that Iraq has also become the second-largest market for Turkish contractors after Turkmenistan, with projects totaling up to $5 billion annually. Breaking trade links could result in permanent loss of markets to regional competitors, he said, warning against “shooting ourselves in the foot.”

In a fresh outburst Sept. 26, Erdogan said, “When we start implementing the sanctions, [the Iraqi Kurds] will be in a fix.” Alluding also to blocking Iraqi Kurdistan’s oil exports via Turkey, he said, “Once we turn off the [pipeline] valve, it will be over — no income whatsoever for them. When the trucks stop [shipping goods] to northern Iraq, they will be left without food and clothing.”

Indeed, such sanctions could cause trouble for the Iraqi Kurds. Yet the fallout would affect countless of people and businesses in Turkey as well. Inevitably, the economic losses would have their political repercussions. The fate of Habur could ultimately bear on the support the ruling Justice and Development Party has enjoyed among the Kurds.

Wary of further trouble for the volatile Turkish economy, the country’s economy minister spoke out against sanctions Sept. 27, contradicting Erdogan. “The talk of an economic embargo is dangerous rhetoric,” Nihat Zeybekci said in a newspaper interview. Referring to the sanctions that Russia had slapped on Turkey over the plane-shooting incident in 2015, he said he disapproved of Turkey “making the same mistake vis-a-vis northern Iraq.”