Turkey's decision to close its only border crossing with Iraq amid a spike in coronavirus cases there will deal a great blow to the country's economy, costing some $1 billion monthly. 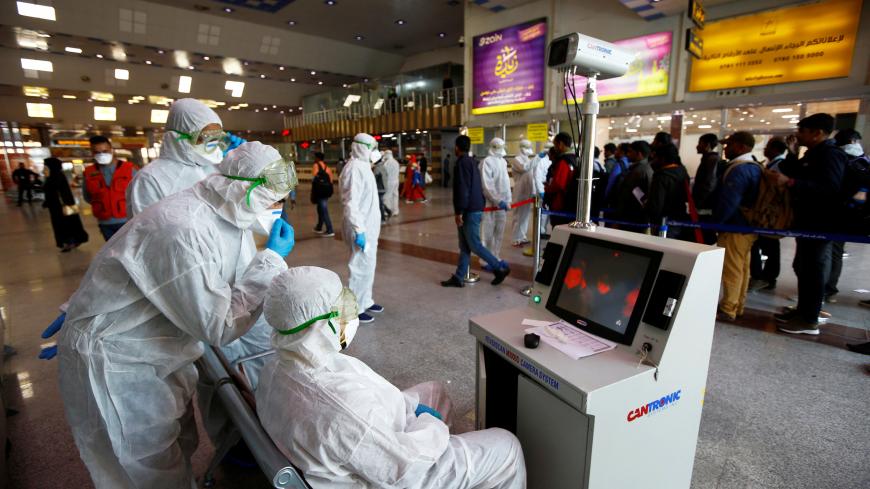 Medical staff in protective gear look at a screen while checking temperatures of passengers upon their arrival following an outbreak of the coronavirus, at Najaf airport, Najaf, Iraq, Feb. 26, 2020. - REUTERS/Alaa al-Marjani

DIYARBAKIR, Turkey — Turkey’s closure of its only border crossing with Iraq amid a spike in coronavirus cases in its southern neighbor has disabled a major trade route, threatening the livelihoods of millions of people, from street vendors at the crossing to big industries on the other side of the country.

The Habur crossing, which opens into Iraqi Kurdistan, was sealed off on March 1, a week after Turkey closed its border with its eastern neighbor Iran, the epicenter of the contagion in the Middle East.

The closure of Habur, Turkey’s second busiest border crossing, has set off alarm bells across the business community, which fears losing major markets in Iraq, the third largest buyer of Turkish goods, atop a bruising economic downturn at home. The crossing has been an economic lifeline for Turkey’s Kurdish-majority southeast, an impoverished, conflict-torn region that borders Iraq.

Habur’s significance extends beyond Turkey as it serves as a transit route for some of Iraq’s imports from third countries, including via Turkey’s Mediterranean ports. Businesspeople warn that a protracted closure of the crossing could lead to shortages in import-reliant Iraq.

“Currently our monthly exports to Iraq are worth some $800-900 million. There are also the transit shipments via Turkey,” Nevaf Kilic, head of the Turkey-Iraq Industrialists and Business People Association, told Al-Monitor. “Some 2,500 trucks cross through Habur daily. The closure of the crossing is a blow to the livelihoods of millions of people.”

Turkey’s exports to Iraq stood at $10.2 billion in 2019, while its imports amounted to about $2.7 billion. In January alone, Turkey’s exports were worth $817,000, a 10% increase from the same period last year. Turkey sells a wide range of products to Iraq, mainly food, textile and construction materials, and buys mostly oil and petroleum products from its southern neighbor.

Some 1.5 million vehicles and more than 3.5 million people cross through Habur annually, according to Trade Ministry figures. Turkey has sealed off the crossing in the past amid political tensions with Iraqi Kurdistan and Baghdad, but an epidemic lockdown is a first.

Mehmet Kaya, chairman of the trade and industry chamber in Diyarbakir, the largest city of the mainly Kurdish southeast, believes Habur’s closure was “premature” and “will deal a great blow to both Turkey’s and regional trade.”

International commerce aside, the daily traffic along the route has been a blessing for small businesses in the southeast, which cater to the needs of truck drivers, passengers and vehicles. From small-time vendors and restaurants to hotels and repair shops, all local businesses benefit from the traffic. Small manufacturers in the region also stand to lose. The 221 companies in Diyarbakir’s industrial zone, for example, export some 65% of their production to Iraq.

Kilic said the impact on Iraq could be even worse as the country produces little and relies on imports. A shortage in goods would cause prices to jump, he warned.

Halil Bilisik, the head of the Young Businessmen Association in Sirnak, the province where Habur is located, agreed that both sides would be hit. Referring to Turkey’s economic woes, he said, “Turkey’s situation is obvious; we will be negatively affected. Even 10 days [of closure] would be detrimental. The same goes for [the Iraqi side]. Turkey is a major trade partner for them and their border crossings with Iran are closed as well. If this lasts too long, they will be badly affected, even worse than we will.”

Businesspeople believe the closure of the crossing was rushed, complaining of losses because the decision caught companies off guard. Bilisik said thousands of trucks were stranded, unable to deliver their freight, though the exporters will still have to pay transportation costs.

The business community expects an urgent solution. Officials have floated the idea of setting up a buffer zone to keep trade going, but “this would be hardly a viable solution for a border crossing through which 2,500 vehicles exit on a daily basis,” according to Kilic.

“Health comes first, but trade should not be affected,” he said. “There is an extraordinary situation at present and we businesspeople respect that. But unless a solution is found, the losses will be very serious. We’ll lose $1 billion monthly in exports alone, not to mention the shipping sector and the people who work in it.”