The sight of Turkish soldiers at the Habur border crossing with Iraq for the first time in 26 years raised many questions and a lot of conflicting answers. 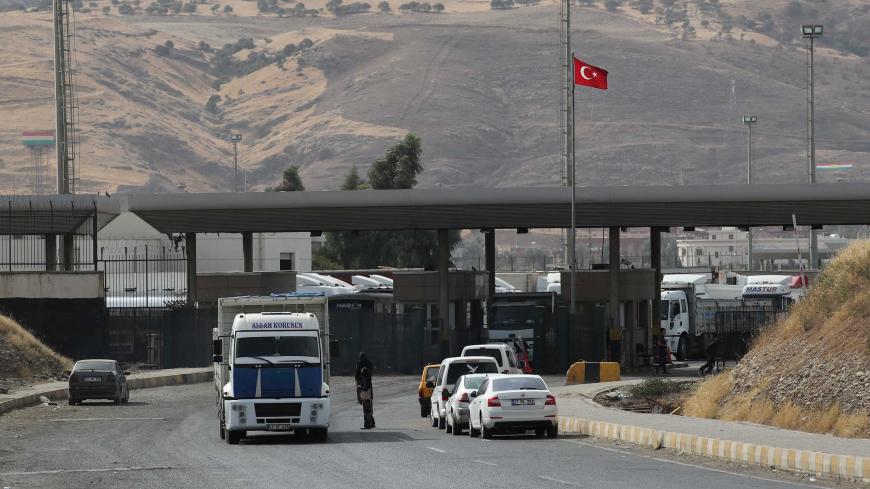 Trucks are pictured after crossing the border between Iraq and Turkey as vehicles wait in line to pass Habur crossing near Silopi, Turkey, Sept. 25, 2017. - REUTERS/Umit Bektas

HABUR CROSSING, Turkey — Tensions were already high last week between Iraq's central government in Baghdad and the Kurdistan Regional Government (KRG) in Erbil. The stress spiked Oct. 31 near the Iraq-Turkey border when sirens began wailing and a military convoy escorted by tanks was seen moving toward the border. People feared Turkey's army was entering Iraq.

The convoy turned out to be a mixed Iraqi-Turkish one. Iraqis who had come to Turkey to participate in exercises were on their way home.

After the KRG held an independence referendum Sept. 25 and Baghdad responded Oct. 15 by sending in troops to retake disputed territory and squelch any talk of secession, many people wondered what would happen on the Turkey-Iraq border.

Habur crossing, known as Ibrahim Khalil border gate on the Kurdish side, is the sole crossing between the two countries. After taking over Kirkuk, Baghdad then decided it wanted control of the crossing. Iraqi soldiers who had flown to Turkey for the exercises were now going back by road for the first time in 26 years.

When the Iraqi army had abandoned that crossing in 1991, nobody had cell phones to report it. It took the world many days to learn that the Iraqis had handed over northern Iraq to the Kurds. But as Iraqi soldiers recently approached the border crossing, the entire world knew about it.

Some Turkish media ran false headlines saying the crossing had been handed over to Baghdad. The Turkish side was pleased with this development, especially when social media began spreading photos of Iraqi soldiers accompanied by senior officers from both sides at the border crossing. Nobody seemed to notice that there was not a single photo or report of a customs administration office being handed over.

The KRG soon followed with a statement attributed to the crossing's director that said: “Ibrahim Khalil border crossing is not closed. Our citizens and businessmen should understand this. This crossing will always be open for travels and business. All those reports in the media that the crossing is closed or is now under Iraqi control are totally baseless. This is all part of psychological warfare against us.”

The KRG statement did not, however, deny that Iraqi soldiers had arrived at the crossing. It said, rather, that the soldiers were making a simple visit.

It didn’t take the Iraqi media long to join in the triumphant but false reporting, colorfully trumpeting that the border crossing was now in the hands of the government.

A customs official who did not want to be identified told Al-Monitor that customs work was still being carried out by civil servants attached to the KRG. “In the morning, Iraqi soldiers and commanders came, met with our officials and then left. At the moment, there is not a single government civil servant or military official there,” the official said.

Another customs official also told Al-Monitor nothing had changed in the customs zone. Following the crescendo of reports about the situation at Habur crossing, Samal Abdurrahman, the director general of the KRG Customs Administration, issued a statement saying no Iraqi force had entered the customs zone. ​Some truck drivers Al-Monitor reached by phone said they hadn’t seen any changes on the Iraqi side.

The only "reality" was the sight of Iraqi soldiers in the area, but according to the border crossing's assistant director, Muhammad Tahir, those were only the soldiers who had been on exercises in Turkey and were returning to Iraq accompanying Iraqi Chief of Staff Gen. Othman al-Ghanmi. However, Turkish Prime Minister Binali Yildirim was among those who declared that the customs zone has been taken over by the Iraqi government.

“Habur is a vital crossing. We are trying to increase trade between the countries. If the central government can ensure security, we want Turkish … vehicles to reach as far as Baghdad and Basra. Now because of ambiguity, some companies have ceased trading. We have to overcome that. Yes, the crossing was in the hands of the Kurdish authority for 26 years. A sudden change may cause short-term problems. Our vehicles travel from Sulaimaniyah to Baghdad, but we want immediate opening of the roads to Mosul and Kirkuk. The Turkish government is deeply concerned with our relations with Iraq,” Kilic told Al-Monitor.

Despite all the contradictory statements and speculations, it's still not clear who's in charge of the Ibrahim Khalil border gate. It looks as if the KRG will continue to manage the crossing quietly, and if it does hand over control, nobody will be told. There are people who today think Baghdad has already quietly taken over the crossing but is not talking about it loudly so as not to anger the Kurdish public.