Is Iran seeking to impose its influence in Iraq's liberated Sunni areas?

The opening of a school in Ninevah province under the name of Ruhollah Khomeini, the founder of Iran’s Islamic Revolution, stirred a wide debate within political and public circles in Iraq, as some saw the move as an attempt to provoke some Iraqis. 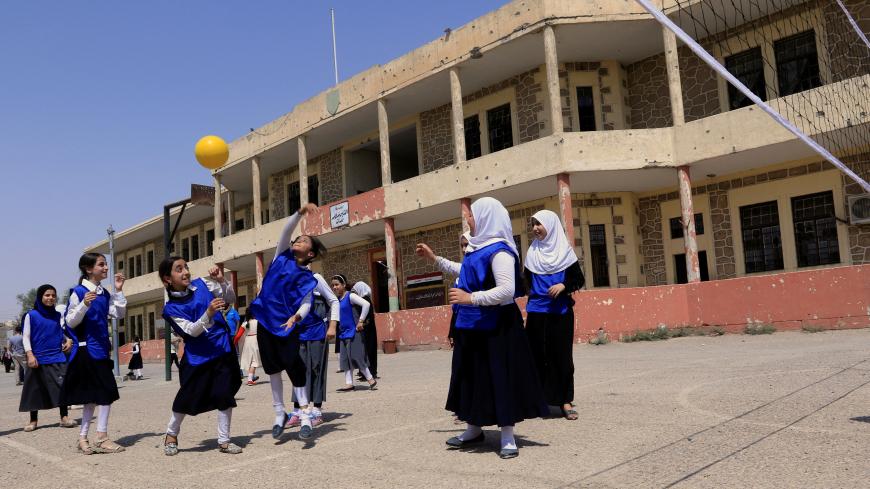 BAGHDAD — On Sept. 14, an elementary school was inaugurated in Bartella in Ninevah province. The school, funded by Iran, was named after the leader of the Islamic Revolution in Iran, Ayatollah Ruhollah Khomeini.

Iraq’s Sunni population, specifically in Ninevah province, associates Khomeini with the Iran-Iraq War that lasted from 1980 to 1988. The image of the former leader of the Islamic Revolution brings back dark memories for the people in the Iraqi province.

The opening of the “Imam Khomeini school” in a Sunni area stirred angry reactions. Activists and politicians in the city of Mosul considered the move “a provocation” toward the people of the province and an attempt to impose Iranian agendas through this institution.

Khomeini’s name was printed on a large banner that was hung on one of the school’s tallest buildings. The school was registered at the Ninevah Education Directorate under the name “Al-Zhara” school, according to Hussein Hamed, the director of the school buildings department at the Education Directorate in Ninevah province. The question arises as to why it now is being called the Khomeini school.

The Iraqi Education Ministry has remained silent over the opening of the school that bears the name of a controversial figure for most Iraqis.

Education Ministry spokeswoman Salama al-Hasan told Al-Monitor over the phone that she was not aware about the opening of a school bearing the name Khomeini, although the school was inaugurated over a week ago and the opening was widely covered by the media.

Jamila Obeidi, a parliamentarian for Ninevah province, said naming a school after Khomeini in her province was a provocation for the people there, especially since it has many Iraqi army officers who fought in the Iran-Iraq War.

Obeidi told Al-Monitor, “The school, funded by an Iranian charity, should not have a political, religious or confessional name. A figure such as Khomeini provokes the sentiments of Mosul’s residents.”

A number of Iraqis say that Khomeini was the reason why thousands of Iraqis were killed and that Iran has played a negative role in Iraq. This is why they believe there is no justification for the use of Khomeini’s name in a Sunni-dominated province.

Hakam al-Dulaimi, an activist in the relief field in Ninevah, told Al-Monitor, “The school should have been named after an Iraqi fighter who fought terrorism instead of Khomeini, a foreign figure whom most Iraqis resent.”

Dulaimi did not reject the donation that the charitable organization provided to help build the school. He just rejected that the school was named after Khomeini, considering this a humiliation for the city and its people.

Local officials and tribal sheikhs in Ninevah also described the opening of the school as a provocation. They have expressed their fears about the school, as they consider that the Khomeini doctrine of velayat-e faqih (Shiite religious rule) has been behind some of the problems that have plagued the province since it was recently liberated from the Islamic State (IS).

But the Iranian consul in Erbil, Murtada Abadi, and the director of the Imam Khomeini school, Kazem Yassin, said in press statements that plans for the school began before IS took control of Mosul on June 10, 2014 — not after the city’s liberation.

Indeed, a week before IS took Mosul, the director of the Bartella district had suspended the establishment of the Imam Khomeini school.

Atheel al-Nujaifi, when he was governor of Ninevah province, said then that the absence of an official approval was hindering the completion of the school’s construction. He said, “Choosing the name of Khomeini in Ninevah is intended to stir up sedition in the province.”

The school includes 12 classrooms named after the 12 Shiite Imams. The Iranian Al-Alam news network reported that Islamic sciences will be taught at the school with the aim of graduating a new generation that “carries the ideology” of Khomeini.

The spokesman for the Arab tribes in Ninevah province, Mouzahem al-Huwait, threatened to take a firm stand against the school. He said the Ninevah provincial council bears full “moral and legal” responsibility for opening the school.

Sunnis were not the only ones sharing their concerns. Shiite parties also expressed fears about repercussions that could result from the school name, and warned against bloodshed that might occur.

Mohamed Salem, a parliamentarian representing the Shabak population, said in a press statement, “It is necessary to prevent the use of names that might trigger attacks against the Shabak. This is why we oppose the naming of this school located in the Kurdish [village] of Khazna Tappa near Bartella after Khomeini.”

It seems Iran is trying to reach out to the Sunni populations after the liberation operations in order to garner public and political support for its positions and interests inside Iraq, just as it did and is still doing in Shiite areas where Iran enjoys wide influence.

Before the school was built, offices for Shiite parties and armed factions were opened in Sunni areas that were recently liberated, which was viewed as an attempt to spread political Shiism in these areas.

Before that, pictures of Khomeini had spread in the streets of Baghdad, while a street in Basra was named after the imam last year. In 2015, naming the airport road in the Shiite city of Najaf for Khomeini stirred angry reactions among both Sunni and Shiite Iraqis.

The opening of the Imam Khomeini school in a demographically diverse area may create tension and provocation between the different sects. An attack by any citizen or extremist against the school may provoke security and sectarian problems. For Shiites, Khomeini is considered the leader of the Islamic Revolution, while Sunnis view him as a war “criminal” who killed thousands of them.