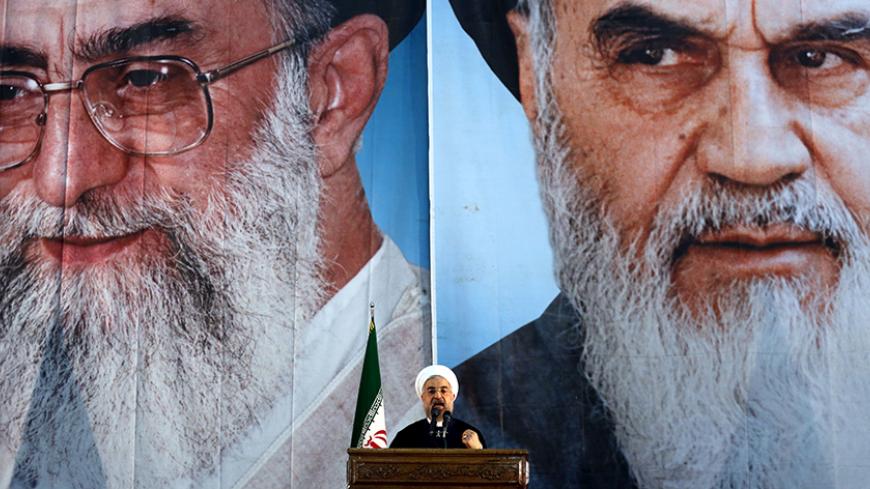 Iranian President Hassan Rouhani delivers a speech under portraits of Iran's supreme leader, Ayatollah Ali Khamenei (L) and the founder of the Islamic Republic, Ayatollah Ruhollah Khomeini (R), on the eve of the 25th anniversary of Khomeini's death, at his mausoleum in a suburb of Tehran, June 3, 2014. - Getty Images/Atta Kenare

The legacy of the founder of the Islamic Republic, former Supreme Leader Ayatollah Ruhollah Khomeini, is contested among Iran's top leadership circles. Reformists refer to his near decade of rule after the 1979 revolution as a “golden era” and selectively refer to some of his decisions to reinforce their own policies, particularly those in favor of compromise and flexibility. Conservatives, particularly hard-liners, recollect a strong political figure who stood up to the West.

In his latest statements, President Hassan Rouhani has attempted to blend the two disparate readings, while at the same time, perhaps in a nod to the current stalemate in the nuclear negotiations, reminding the top leadership that the former supreme leader knew when it was time to “choose peace.”

Rouhani’s reference can be construed as referring to a number of issues, though none can be more significant than Ayatollah Khomeini’s decision to end the Iran-Iraq war in 1988 after a brutal and devastating conflict with a foe that was supported by Arab nations in the Persian Gulf, Western Europe and the United States. In his radio address announcing the end of the war, Ayatollah Khomeini compared accepting the cease-fire to drinking from “the poisoned chalice.” It was a bitter moment for a leader who rallied his people for eight long years under the chants, “War, war until victory” and “The path to Quds goes through Karbala.”

Comparisons between the Iran-Iraq war and the current standoff between Iran and the West over its nuclear program can sometimes be exaggerated. No two geopolitical circumstances are ever quite the same. Undoubtedly, however, both were international crises that have cost Iran immeasurably domestically.

Rouhani and the team of diplomats he has tasked with conducting negotiations with the West have understood well what the international sanctions have cost Iran. And it is their job not only to convince the five permanent members of the UN Security Council plus Germany to reach a deal with Iran to lift the sanctions, but they must also convince Iran’s Supreme Leader Ayatollah Ali Khamenei, who has the final say on the matter, to reduce Iran’s nuclear program to satisfy the concerns of the West. This is no easy task.

Ayatollah Khamenei has previously given his blessing to the nuclear negotiators and has publicly asked other political factions not to “weaken” Iran’s negotiators, who he has referred to as “children of the revolution.” However, with consecutive extensions of interim nuclear deals after failing to reach a permanent deal, and top negotiator and Foreign Minister Mohammad Javad Zarif’s comments yesterday, Jan 28, that “It appears that in this round in the Islamic Republic, no one is ready for an extension,” Rouahni perhaps feels the need to publicly nudge the top leadership toward a deal.