Khomeini was no liberal, says Khamenei

Iran's Supreme Leader Ayatollah Ali Khamenei has warned Iranians about distorting the character of the founder of the Islamic Republic, Ayatollah Ruhollah Khomeini. 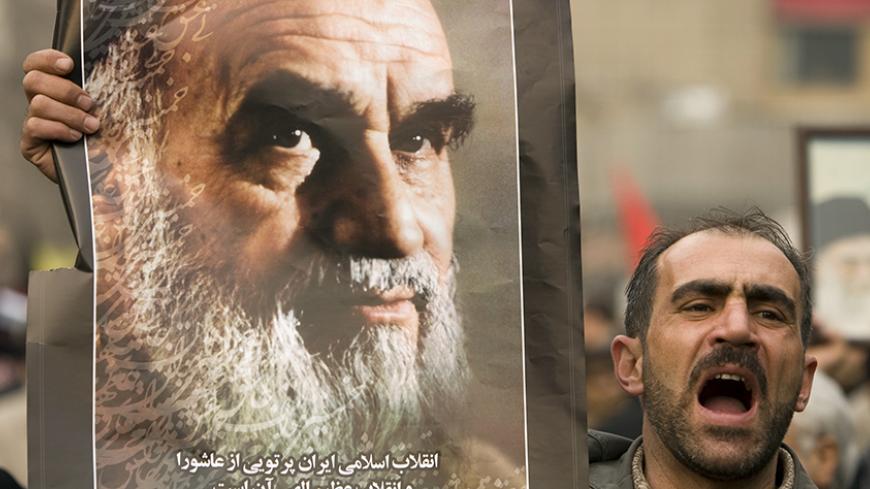 A man holds a picture of Ayatollah Ruhollah Khomeini, founder of the Islamic Republic, as government supporters protest against opposition demonstrations during the holy day of Ashoura, in Tehran, Dec. 30, 2009. - REUTERS/Caren Firouz
Arash Karami
@@thekarami
June 4, 2015

The legacy of the founder of the Islamic Republic of Iran, Ayatollah Ruhollah Khomeini, is hotly debated within Iran's leadership. Reformists recall a “golden era” in which the former supreme leader oversaw a diverse political class that would only interfere in daily political affairs when forced to, often in their favor. Conservatives and hard-liners tend to remember Khomeini as a visionary leader who stubbornly stood up to the bullying of the West, especially the United States, and succeeded in so doing. Both narratives, and various other recountings of specific events, regardless of their accuracy, are often self-serving and used to criticize political enemies.

This year, on the anniversary of Khomeini's death, these competing narratives have risen to the surface once again and made headlines in the Iranian media. Ayatollah Ali Khamenei, who became supreme leader immediately after Khomeini, spoke out June 4 at the newly renovated Imam Khomeini Mausoleum south of Tehran against the dangers of “distorting” his character.

Khamenei warned that “distorting the character of Imam [Khomeini] and distorting the path of Imam are an effort to distort the straight path of the Iranian nation. If the path of Imam is lost or forgotten or, God forbid, intentionally put to the side, the Iranian nation will take a hit.” He said that any distortion of Khomeini’s legacy should be a “serious warning for officials, experts of the revolution [and] Imam’s former students.”

Khamenei said that there were distortions of Khomeini’s character even during his lifetime, when some would attribute comments to him that in reality “had no relation with [Khomeini's] character.” Khamenei stated, “After his passing, this continued, and some tried to introduce Imam as liberal-minded, which under no conditions existed in his political, intellectual and cultural behavior.” Khamenei had said that during Khomeini’s life, those opposed to the Islamic Revolution incorrectly tried to portray him as being “dry, violent, inflexible and without affection.”

Khamenei warned that a failure to study Khomeini's true beliefs would lead to “some introducing Imam according to their own intellectual preferences.”

According to Khamenei, there at least seven principles of Khomeini’s intellectual philosophy. He listed them as:

Khamenei added that these principles are not exclusive and that experts who study the statements and work of Khomeini can derive others as well. As is customary in Iranian politics, Khamenei did not specify who specifically was distorting the legacy and character of Khomeini.