Critics have assailed the apparent lavishness of Ayatollah Ruhollah Khomeini's shrine, saying he would have opposed the "palace-like" building. 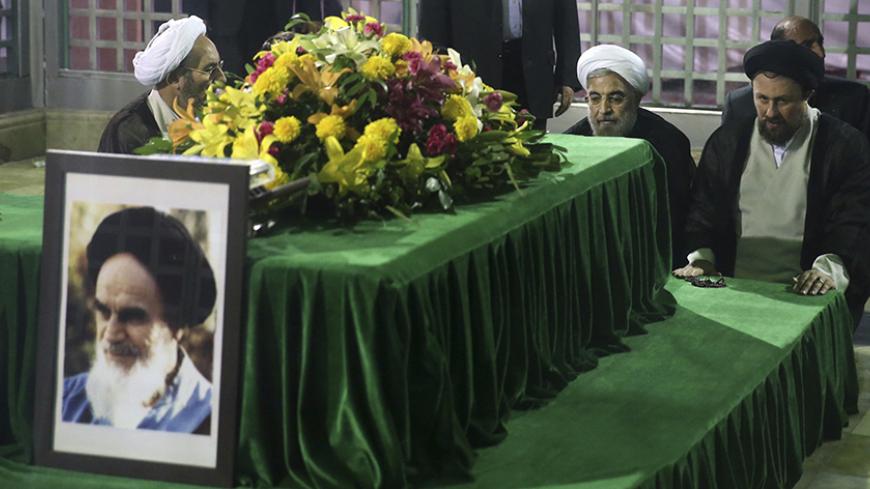 As Iranians marked the 26th anniversary of Ayatollah Ruhollah Khomeini's death June 4 at his mausoleum, Ayatollah Ali Khamenei warned about distorting the character of the late founder of the Islamic Republic of Iran as this year’s ceremony was held amid a debate over a major reconstruction of Khomeini's mausoleum in Tehran.

The dispute began after the conservative Jomhouri-e Eslami daily on May 18 criticized the nearly finished project as “incompatible with Khomeini’s principle of living a simple life.”

"The very wide area, the ceiling and the strong foundation, the thick concrete walls around grabbed my attention so much that I wasn't able to engage in pilgrimage as usual," Editor-in-Chief Masih Mohajeri editorialized about the megacomplex that includes shops, a university, a five-star hotel, hospital, a museum and a parking lot for tens of thousands of vehicles.

Days after, the Jamaran News (run by the Institute for Compilation and Publication of Imam Khomeini's Works) published images of the nearly finished shrine.

The images went viral on social media. Though no numbers of the costs of the renovation were published, many described the new “extravagant” shrine a “palace-like” building that the late leader himself "would have opposed if he was alive."

A photo has widely been shared on social media that compares the simple house Ayatollah Khomeini used to live in with a picture of his new tomb under a high ceiling decorated with tiles and glitter.

Another video, also shared on social media, reminds the viewers that completion of the project took more than a quarter-century while showing pictures of a portion of the population who are living in dire conditions.

“Officials keep talking about the need to reduce unnecessary costs of living, but look what the country's budget is used for?” said a shopkeeper in Tehran after seeing the images of the new shrine.

The criticism against the major renovation at Khomeini’s shrine was not just limited to users on social media as several conservative websites and newspapers described the project as reminiscent of palaces in “Hollywood films” or “the myths of Persian kings.”

The debate over the issue also caught the attention of several foreign media. Germany's Deutsche Welle published a photo gallery of the building describing it as "the most expensive mausoleum" in the world.

Ahmad, a 29-year-old college student who was just 3 at the time of Khomeini's death, told Al-Monitor that for the "love of Imam Khomeini" he has attended the annual ceremony commemorating the late leader at his shrine since he was 19. But, he said, "This year the ceremony was so different. It felt so strange, there was literally no relationship whatsoever between the palace they had built for him and the very simple life he used to live."

The mounting criticism has forced some officials to respond.

Mohammad Ali Ansari, who has overseen the project since Khomeini died, dismissed the criticism and stressed that the megaproject's plan, also known as the "ShahreAftab" (Sun City) project, was not one man's decision. He said over the last 25 years, four presidents, several parliaments and mayors among others have had overseen and approved its budget.

Gen. Ramezan Sharif, head of the Islamic Revolutionary Guards Corps' public relations, also slammed the critics and warned them not to act in a way that is in favor of the enemies of the imam and the revolution.

But some say the criticisms, which are mostly aimed at Seyed Hassan Khomeini, a grandson of Ayatollah Khomeini, are politically motivated.

Mohammad Ali Ahangaran, a cleric close to the family of Ayatollah Khomeini, has been engaged with his Instagram followers to justify and support the project in recent weeks. "After 25 years, the shrine of Imam Khomeini has been built splendidly and in accordance with Iranian art, culture and belief," he said.

Slamming the criticism of those behind the new shrine — which can reportedly resist an earthquake as strong as magnitude 10 — Ahangaran added that the critics should not generalize their political differences with the grandson of the late leader with the splendid architecture of the shrine.

Despite all the disagreements over the project, the renovated main hall of the shrine where the tomb of Islamic Republic’s founder is located was inaugurated as hundreds of thousands of his devotees attended his ceremony.

Some critics say now that the renovation project has been finished despite all its conflict with Khomeini’s teachings about living a simple life, the next step that should be taken by those in charge of his shrine is to introduce the foreign guests and even the young generation of Iranians with the true reality of his manner and way of living.