A grandson of the founder of the Islamic Republic of Iran is in a unique position to influence politics, but his family name limits his involvement. 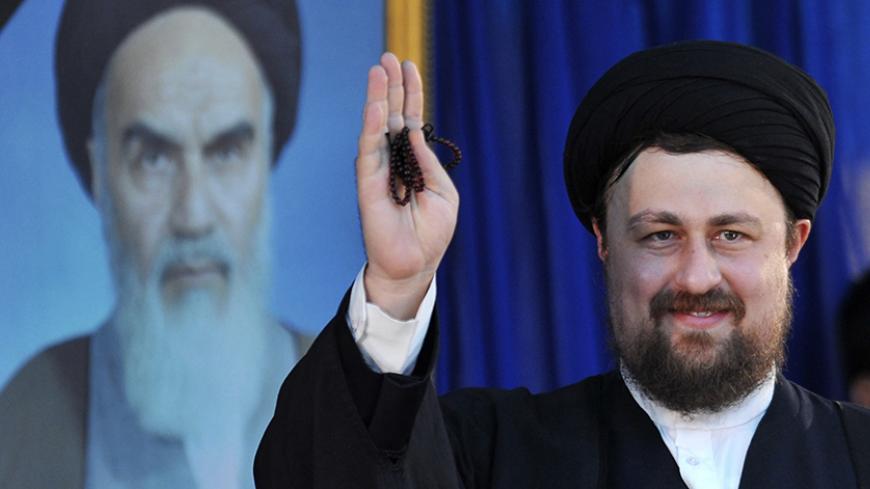 Hassan Khomeini, grandson of Ayatollah Ruhollah Khomeini, waves as he speaks at a ceremony to mark the anniversary of his grandfather's death at the Islamic Republic founder's shrine in Tehran, June 4, 2010. - REUTERS/IIPA/Sajjad Safari
Arash Karami
@@thekarami
May 14, 2015

The Ansar-e Hezbollah vigilante group issued a warning on April 22 that if Hassan Khomeini, a grandson of the founder of the Islamic Republic of Iran, traveled to Golestan province to deliver a speech alongside a prominent political figure rumored to be running for the parliamentary elections in 2016, he would be physically attacked.

It was a rare attack on the grandson of Ayatollah Ruhollah Khomeini, the founder of the Islamic Republic of Iran, with the only other instance involving supporters of former President Mahmoud Ahmadinejad shouting down Hassan Khomeini during a speech in 2010 commemorating the Iranian revolution.

After April's incident, Ansar-e Hezbollah was pressured to deny ever issuing the warning and wrote an open letter stating it “welcomes the memory of Imam [Khomeini]” to Golestan. Despite the vigilante group’s subsequent denial, the initial message was clear. Amid swirling rumors of a political run and hard-liner concerns over his ability to draw voters to the moderate and Reformist cause, the grandson of Ayatollah Khomeini is now fair game.

Seyyed Hassan Khomeini is the most notable of the 15 grandchildren of Ayatollah Khomeini, who is often referred to simply as “Imam” in Iran. Hassan Khomeini’s special role comes from a number of factors that have to do with patriarchal legacy — he is the eldest son of Ahmad Khomeini — and chance. Ayatollah Khomeini had two sons; his eldest, Mostafa, died in Iraq in 1977 while the family was in exile. Hassan Khomeini's father, Ahmad, became the supreme leader’s right-hand man and served as a key figure in the Khomeini household when Khomeini became the supreme leader.

When Ahmad Khomeini suddenly died at age 50 in 1995, Hassan Khomeini took over his father's duties of running the mausoleum of Imam Khomeini in the south of Tehran. Ahmad Khomeini is also buried there. As a young boy, Hassan Khomeini was alongside his grandfather in Najaf and the suburbs of Paris during the turbulent and chaotic years as Khomeini advocated for the overthrow of Shah Mohammad Reza Pahlavi.

Khomeini's 43-year-old cleric grandson has attempted to keep a cool distance from politics most of his life. However, that appears to be changing and his emergence has terrified hard-liners as much as it has excited Reformists.

A political role would be a departure from Hassan Khomeini’s expected role. As head of the Imam Khomeini mausoleum, he is the grandson responsible for safeguarding the legacy of his grandfather and is expected to remain nonpartisan. One journalist in Iran who wished to remain anonymous likened the grandson's function in Iran to that of the British royal family, which cannot enter politics directly in favor of a particular party. Interestingly, many of Khomeini’s other grandchildren have become Reformists or critics of some of the Islamic Republic’s policies, though they do not hold any official positions within the government and their words do not carry much political weight.

Judging by Hassan Khomeini’s few interviews and speeches, one can hardly detect any political leanings. Even during “easy” interviews, he is not likely to give his positions away. During a 2008 interview with Iran’s premier sports news show anchor, he was asked which one of Tehran’s two rival soccer teams he rooted for. He replied, “I root for both teams.” This is akin to the mayor of New York saying that he roots both for the Yankees and the Mets. In most of his other interviews, he has focused on religious affairs or made general statements about the need for “national unity” behind the figure of his grandfather.

Hassan Khomeini has not been able to remain completely neutral however, giving his political leanings away in more subtle ways. In clerical circles and the opaque politics of the seminary, whom a cleric meets with, who speaks in favor of him and whom he is pictured with can say a great deal.

Signs of Khomeini’s connection to the Reformist and moderate current seem to be increasing.

When it comes to previous presidents, Khomeini has been pictured much more often with the Reformist Mohammad Khatami and the moderate Hashemi Rafsanjani than with the hard-line Mahmoud Ahmadinejad.

In a March 2015 interview with Reformist Shargh Daily, he essentially advocated the unofficial Reformist platform when he said, “We take pride in our past, we criticize our current state and we are hopeful with respect to our future.” Reformists often talk of the 1980s era of Ayatollah Khomeini as a “golden era”; to the displeasure of hard-liners they criticize the present corruption and exclusionary politics, and always remain optimistic about working within the system toward a better future.

Hassan Khomeini’s biggest supporters have also perhaps revealed the young cleric's leanings. Rafsanjani recently referred to Khomeini as “allamah,” an honorific used for the most learned religious scholars. The website Entekhab, which is close to the moderate faction in Iran, will often refer to him with the higher ranking of ayatollah instead of hojat al-Islam. The praise may not be out of place: He is believed to be teaching dars-e kharej in the seminary, which is the most advanced level of Islamic jurisprudence.

Hard-liners have reacted publicly to these subtle tells.

An article in Mashregh News, one of the most hard-line websites in Iran, quoted Reformist activist Abdullah Naseri, who said that “from an intellectual viewpoint, Hassan Khomeini is a Reformist but he is in a place where he is the heir to … the founder of the revolution.” The article, which focused on how the Reformists would approach the 2016 parliamentary elections, was titled, “The confession of Hassan Khomeini being a Reformist.”

Many feel that Khomeini's political leanings are now out in the open. Reformist journalist and political activist Morteza Kazemian told Al-Monitor that Khomeini’s “overall views” are Reformist. He pointed to the fact that Khomeini refused to adopt the hard-line discourse after the 2009 contested presidential elections and has even met with the family of political prisoners, two facts that has caused the wrath of hard-liners, according to Kazemian.

It would make sense that the Reformist and moderates would try to claim Khomeini as their own. The legacy of Ayatollah Khomeini still draws a significant crowd within top political circles in Iran. Plus, the grandson is a relatively young cleric who appeals to the younger generation.

Saeed Aganji, a journalist and former student activist in Iran, believes that Hassan Khomeini’s appeal to a younger generation comes from the fact that “he has a new look toward Islam; it’s more gracious.” Khomeini has carefully nurtured this image, too. During a 2007 interview with Iranian television, he expressed fondness for poetry, boasted that he speaks English even better than Arabic, and talked about the need for men to be “more flexible” in accepting a role for women in society given the historical patriarchy in Iran.

But how influential Khomeini can be in politics remains to be seen. There are whispers about him running in the 2016 elections for the Assembly of Experts, the body that elects and supervises the supreme leader. An article in hard-line Afkar News suggested that Rafsanjani is pushing Khomeini to run to increase his allies and own political standing within the assembly. However, a journalist who spoke on condition of anonymity told Al-Monitor, “The probability of Hassan Khomeini running is zero.” Kazemian also said Khomeini will try to keep his distance from direct entry to politics to “safeguard his independence.”

Khomeini himself has been coy about the question of entering politics. In the interview with Shargh, he said that if the “condition is provided and a person feels that they have a responsibility … naturally that person will take action.” He did not respond to Al-Monitor’s emails on the subject.

Even if he does not run directly in any elections, he can still be influential. Many journalists believe that his “implicit” support of the Reformist Mir-Hossein Mousavi and the moderate Hassan Rouhani in the presidential elections of 2009 and 2013, respectively, played a significant factor in their popularity and in the latter’s victory.

Perhaps now Khomeini is ready for explicit support. When the warning by Ansar-e Hezbollah was initially issued, he responded by saying that he would not be deterred by “such threats” and denied the trip was ever planned to begin with.

He has also decided to go on the offensive, blaming the “weaknesses” of the Interior Ministry in not confronting attacks by rogue elements and adding, “I’m certain that friends and those who love the Imam will put the few extremist movements in their place.” His comments will likely energize both supporters and critics alike and are a serious departure for the normally soft-spoken cleric. At the very least, they do not seem like the words of a man content to go back into the quiet administrative world of running a mausoleum.