Khomeini’s grandson says there is more to Islam than hijab

In a TV interview, Hassan Khomeini discussed a number of controversial issues such as Islam, the hijab and newcomers to the revolution. 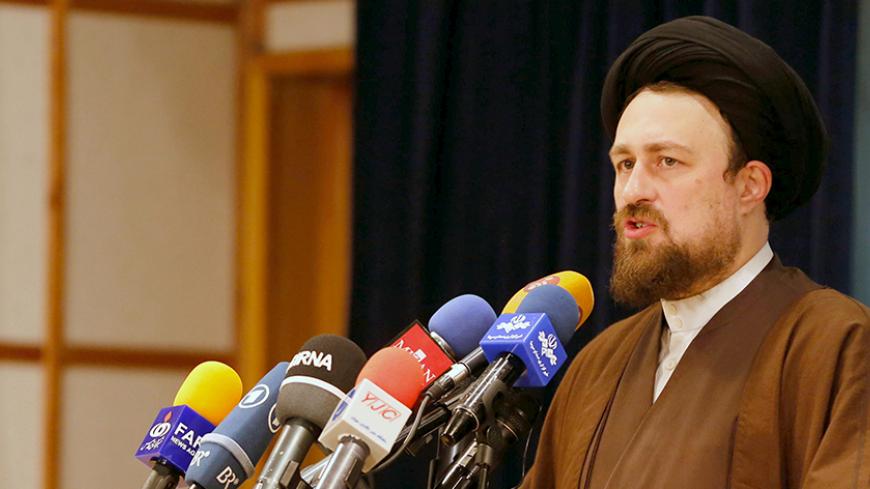 Hassan Khomeini, grandson of Iran's Ayatollah Ruhollah Khomeini, talks to journalists after he registered for February's election of the Assembly of Experts, at the Interior Ministry in Tehran, Dec. 18, 2015. - REUTERS/TIMA

On the anniversary of the death of Ayatollah Ruhollah Khomeini, the founder of the Islamic Republic of Iran, Iranian officials and the media typically release statements and make speeches about the legacy of the leader who led the 1979 Islamic Revolution. This year, for the 37th anniversary, the Islamic Republic of Iran Broadcasting (IRIB) conducted a rare interview for the occasion with Khomeini’s grandson Hassan, who is often referred to as the “remembrance of Khomeini” and is tasked with carrying the legacy of the Khomeini name. In the interview, the grandson made controversial remarks about Islam, the hijab and a former president currently under a media ban.

Hassan Khomeini, who registered to run in the Assembly of Experts elections but was controversially blocked by the hard-line Guardian Council, has had a difficult relationship with hard-liners. His political and religious views have mostly been in line with Reformists, though his avoidance of partisan politics and his position as custodian of Khomeini’s mausoleum and thus his legacy has shielded him from the harsh attacks other Reformist-minded clerics received.

That the hard-line IRIB would interview Hassan Khomeini on the anniversary of Ayatollah Ruhollah Khomeini’s death is also a rare occurrence. According to Hassan’s website, the last time IRIB interviewed him for the occasion was in 2007. Hassan Khomeini even joked with the IRIB interviewer about this, saying, “Finally you stopped avoiding [me] and after years invited me to a TV [interview].”

During the two-hour interview, Hassan Khomeini was mostly invited to discuss his memories of the final years of Ayatollah Ruhollah Khomeini’s personal life, and his religious and political views. However, Hassan Khomeini took the opportunity on a few occasions to present his own views on controversial domestic issues.

“When we say piety, we say the hijab, prayers, fasting, non-mixing between unrelated men and women — these are certainly parts of religion but religion is not only this,” said Hassan Khomeini when asked about his grandfather's contribution to religion and its importance for Iranians today. “Religion is the rights of the people. Religion is fighting oppression. Religion is that one institution that must not take away someone’s rights. Religion means that everyone can speak freely. Religion means that there is no poverty in society.”

When asked by the interviewer to discuss how Ayatollah Ruhollah Khomeini was aware of the people’s demands, Hassan Khomeini, without mentioning the name of former President Mohammad Khatami, discussed the media ban on the Reformist politician. “Today you realize you cannot prevent someone’s words from reaching people,” he said. “Meaning you cannot ban someone’s images, ban them from speeches or ban someone from speaking to someone else. In reality this is mocking ourselves.” Many believe that Khatami’s position on the 2009 contested presidential elections caused his media ban. However, the popular former president is still influential; his video-recorded message urging Iranians to vote for Reformist candidates in the February parliamentary election was one of the most popular of the election period.

Hassan Khomeini also criticized the so-called newcomers who joined the government after the revolution, mostly hard-liners today, who have now consolidated power under the slogan of continuing the revolution. “I was there and I saw who was there and who wasn’t,” he said. “Who sat down after the table was set and those who suffered from the beginning. I was part of the struggle and I know who took a beating for the revolution. I know who came to the table only once the rice was served.”

He added, “Of course, the table of the revolution belongs to everyone — everyone should sit, but don’t make it a tight space for others.”