How Khomeini lost the battle, but is winning the war

Seyyed Hassan Khomeini, who only entered the fray two months ago, appears set to become an influential and effective figure in Iranian politics. 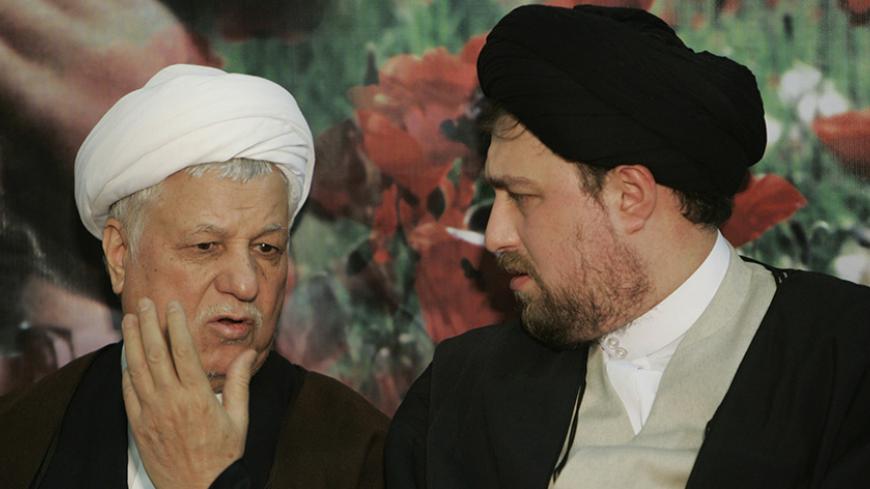 TEHRAN, Iran — The past weeks have been pleasant for Seyyed Hassan Khomeini, in contrast to the bitter days that followed his disqualification from the Assembly of Experts elections.

Khomeini is a grandson of the founder of the Islamic Republic, and according to some, quite similar to late Ayatollah Ruhollah Khomeini. The initial announcement of his candidacy found a warm response by moderates and Reformists, even as few expected Khomeini to step forward. It was the first time since the demise of Ayatollah Khomeini that his family would participate in politics.

Prior to his candidacy, Hassan Khomeini had always avoided running in elections and rarely discussed politics in public. He spent most of his time in the holy city of Qom doing research and teaching at the seminary.

The Guardian Council, headed by conservative Ayatollah Ahmad Jannati, barred Khomeini from competing in the Feb. 26 election. When Khomeini objected and asked that the decision be reviewed, he was disqualified once again. Khomeini appeared unsurprised. “I strongly believe that there is no unclear point about me, as I’m not an unknown person to the Guardian Council members, [in which case] they would need to investigate my identity. My perception is that my complaint won’t lead anywhere,” he said before appealing the Guardian Council’s initial disqualification.

In the Guardian Council’s telling, Khomeini was barred from running due to a lack of adequate clerical knowledge. This reasoning shocked Khomeini’s supporters, as he has been teaching at the highest level in Qom for the past six years. In this vein, it should be noted that several prominent grand ayatollahs, including Hussain Vahid Khorasani, Mousa Shobeiri Zanjani and Abdul-Karim Mousavi Ardebili, had approved of Khomeini’s clerical knowledge prior to the Guardian Council’s announcement. Meanwhile, a 25-year old cleric’s candidacy was approved, raising questions about possible political dimensions to Khomeini’s disqualification.

The Guardian Council was faced with criticism by many grand ayatollahs and old revolutionaries. Ayatollah Ali Akbar Hashemi Rafsanjani was one of the first to seriously attack the body, saying, “You didn’t give a good gift to [Ayatollah Ruhollah Khomeini’s] family ahead of the elections. … Who has qualified you? Who has given you permission to judge the candidates?” He decried the council’s indifference to the grand ayatollahs’ backing of Khomeini.

Meanwhile, Grand Ayatollah Abbas Mahfouzi said in favor of Khomeini, “Everyone must be held accountable for their actions on Judgment Day.” Grand Ayatollah Lotfollah Safi Golpayegani recited a Quranic verse (2:216): “Fighting has been enjoined upon you while it is hateful to you. But perhaps you hate a thing and it is good for you, and perhaps you love a thing and it is bad for you. And Allah Knows, while you know not.”

According to Seyyed Seraj Mousavi, a researcher in Qom, Khomeini’s disqualification ran contrary to the law, as his candidacy wasn’t considered by all members of the Guardian Council.

It should be noted that Khomeini was not the only grandson of the founder of the Islamic Republic to be disqualified. Morteza Eshraghi was also barred from running in the parallel parliamentary elections, in which he was predicted to attract many votes.

Despite the disqualification, Khomeini did not get upset, as he focused on a much bigger picture: the victories of other moderate candidates. Indeed, a few days before the Feb. 26 polls, Khomeini asked his supporters to look ahead, saying, “You should forget complaints. … We shouldn’t avoid the ballot box. … Everyone should choose the best and most deserving candidates.”

Now, with the overwhelming victory of moderates in both the Assembly of Experts and the parliamentary elections, Khomeini appears to be optimistic. Two weeks after the elections, he said, “My presence is not important. We shouldn’t forget our cause by focusing on our personal issues.”

Ironically, displeasure with Khomeini’s disqualification may have been one of the things that persuaded many of those who usually abstain from voting to cast their ballots in favor of moderate and Reformist candidates. There were 55,000 ballots cast in favor of the disqualified Khomeini in the southern city of Bushehr.

In an interview with Al-Monitor, Reformist political analyst Mohammad Javad Haghshenas said, “I think the mass disqualification of candidates including popular figures like Ayatollah Khomeini made people upset.” Nonetheless, it seems that Khomeini’s failed candidacy turned out to be a win for him. Of course, if he had been approved to run, based on polls, he would have gotten the highest number of votes in Tehran and could thus have played an important role along with Rafsanjani and President Hassan Rouhani in the Assembly of Experts.

Meanwhile, though barred from running, his popularity has surged. His influence among the grand ayatollahs and politicians appears to have increased.

Saeed Laylaz, a leading political analyst, told Al-Monitor, “Khomeini is not power hungry and wasn’t looking for a win-win game, but developments occurred to his benefit. I believe the win-win result was achieved due to his position. His family tree, education and his connection with the youth make him a distinguished man. I’m certain that he is one of the most popular figures in Iranian politics.”

Some may suppose that Khomeini is now considered the next leader of the increasingly popular “moderation” camp, but that idea may not be entirely accurate. While he is becoming a potential national game changer, he has always refrained from siding with any specific faction. Indeed, upon registering as a candidate, he announced that he intended to run as an independent.

In Khomeini’s telling, his aim is to prevent hard-liners from appropriating his grandfather’s legacy, as radicals are attempting to attribute hard-line views to the late ayatollah. “Protecting the imam is costly,” said Khomeini in response to complaints about his disqualification.

According to Laylaz, “No one in Iran has Hassan Khomeini’s position in politics, which is due to his family tree. We can’t consider him the leader of the moderates after Rafsanjani, because he is more than that — he is a national and a bipartisan figure, and has attempted to protect this status.”

In the years ahead, Khomeini, who only directly entered the game two months ago, appears set to become a much more influential, effective and decisive figure in Iranian politics.