After the first-ever attack by the Islamic State against Iran, President Hassan Rouhani will have a difficult time pushing for compromise with regional countries and reducing tensions. 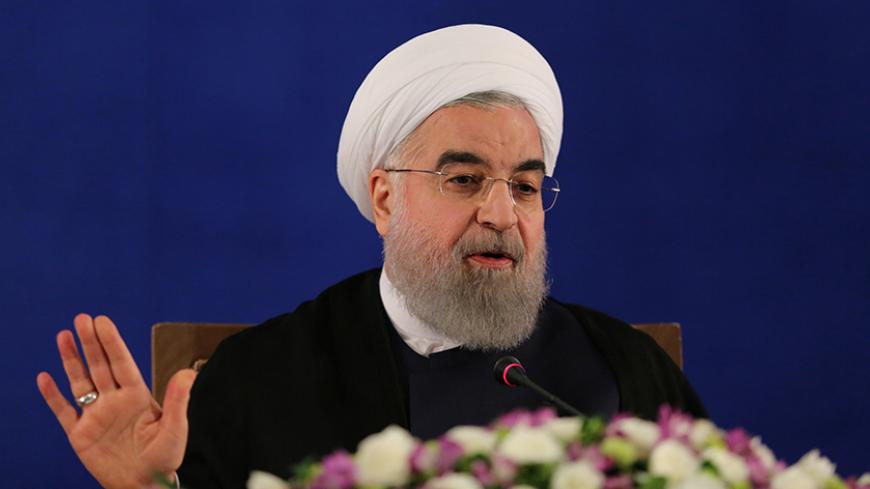 Iranian President Hassan Rouhani gestures during a news conference in Tehran, May 22, 2017. - TIMA via REUTERS

Using the momentum from a recent re-election and in an effort to live up to his campaign promises, President Hassan Rouhani is urging his country’s various power centers, particularly the country’s supreme leader, to push for peace and better ties with regional countries and world powers. However, with the recent attacks by the Islamic State (IS) and the attempt of some military officials to link those countries to the attack, Rouhani’s message will have more difficulty getting through.

In a June 10 speech on the occasion of the birthday of the second Shiite imam, Hasan ibn Ali, who was known for seeking a truce with his enemies, Rouhani said, “Patience and forbearance for peace is more difficult than patience and stamina in the field of war.”

Recounting the early days of Islam, Rouhani said, “Peace is more difficult than war. Sacrificing your life and bravery is a difficult thing, at the same time, tolerating peace is much more difficult than fighting.” As evidence, Rouhani said that the founder of the Islamic Republic of Iran, Ayatollah Ruhollah Khomeini, used the expression drinking “the poisoned chalice” in reference to ending the Iran-Iraq war but never during the war.

Rouhani’s comments that “peace is more difficult than war” made headlines and many observers seemed to construe them as a rebuke to Supreme Leader Ayatollah Ali Khamenei’s comments about compromise. Earlier, Khamenei had said that making agreements with enemy countries and compromising “has a price” and that sometimes challenging and confronting countries, such as the United States, costs less than compromising.

Rouhani is also facing a public and military leadership that is dealing with the first-ever IS attack against Iran. This complicates Rouhani’s message of peace and negotiations, particularly when military officials have attempted to draw links between the IS attack that left 17 dead and regional countries.

Maj. Gen. Mohammad Bagheri, the chief of staff of the armed forces, said June 11 during a prepared speech on the occasion commemorating those killed by the IS attacks that “there is no doubt” that world powers and regional countries have “dispatched” terrorists. The three countries Bagheri named in his address were the United States, Israel and Saudi Arabia. Bagheri issued a warning to Saudi Arabia to not support terrorists. He also said terrorists, and all the countries in and outside the region that support them, will be taught an “unforgettable lesson.”

Gen. Mohammad Pakpour, the commander of the Islamic Revolutionary Guard Corps ground forces, said June 11 that both IS “and the world arrogant powers are targeting the personal and material resources of Muslims.” Pakpour gave his speech in the border province of Sistan-Baluchistan, the home to a large community of Sunnis. He made sure to note that IS does not differentiate between the killing of Shiites and Sunnis.