Many Iranian officials have expressed outrage over a BBC report claiming Ayatollah Ruhollah Khomeini made secret contact with the United States leading up to the 1979 Islamic Revolution. 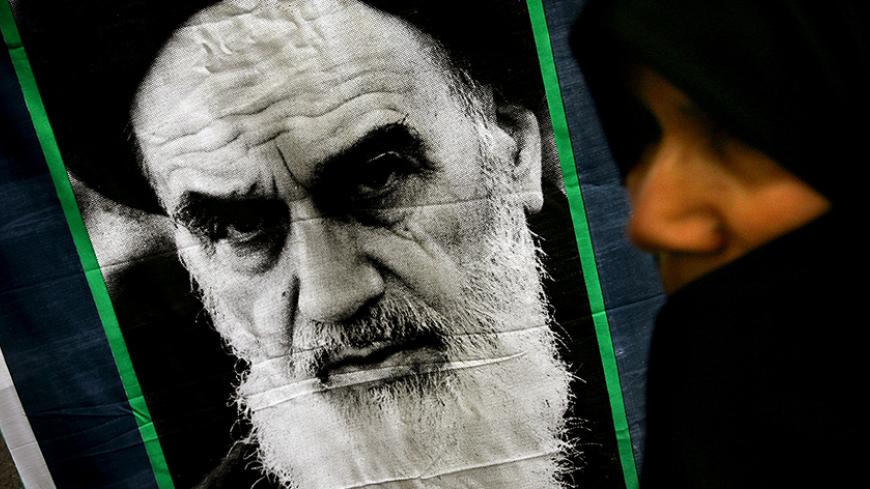 An Iranian woman walks by a picture of Ayatollah Ruhollah Khomeini outside the Jamaran Mosque in Tehran, June 3, 2005. - REUTERS/Damir Sagolj

TEHRAN, Iran — Reactions are still pouring in over the BBC Persian Service’s June 1 story on the founder of the Islamic Republic, Ayatollah Ruhollah Khomeini, based on recently declassified CIA documents. The British broadcaster cites a 1980 CIA analysis, titled “Islam in Iran,” released in 2008 that claimed Khomeini had reached out to the administration of President John F. Kennedy in 1963. The BBC article also reports that Khomeini contacted the White House just before the fall of the Shah of Iran in 1979.

Al-Monitor did not have access to the declassified documents and was not able to independently verify them. The BBC has, however, made “Islam in Iran” available to the public.

CIA documents are reported to show that Khomeini sent a secret letter to President Jimmy Carter in January 1979 in which he proposed that if the US president used his influence with the Iranian military to drop its opposition to his takeover, he would calm the situation in Iran. Khomeini also reportedly promised that US interests and nationals in Iran would be protected.

Khomeini was arrested in 1963 after voicing fiery criticism of Shah Mohammad Reza Pahlavi. At a speech in the holy city of Qom on Ashoura, Khomeini slammed the shah’s land reforms and accused him of serving Israel’s interests while undermining Islam and Muslim clerics. Khomeini also warned the shah that he would come to regret his actions. According to a CIA cable cited in “Islam in Iran,” Khomeini sent a rare message of support to the Kennedy administration, explaining that he was not opposed to American interests in Iran. The cable names theologian and cleric Haj Mirza Khalil Kamarei as Khomeini’s messenger.

The original Persian-language version of the BBC’s story went online two days ahead of the 27th anniversary of Khomeini’s death, prompting a swift response from Supreme Leader Ayatollah Ali Khamenei. Addressing the crowds gathered at Khomeini’s mausoleum on the outskirts of Tehran on June 3, Khamenei dismissed the BBC report as false and asserted, “Britain has always been hostile toward Iran.”

Many others have challenged the authenticity of the CIA documents or claimed that it was Carter who first wrote to Khomeini and that the latter’s response has been distorted. These figures include Kamarei’s son, Nasser al-Din Kamarei, who has issued a statement denying any contact between his late father and the US Embassy.

Al-Monitor spoke with Seyed Mahmoud Doaei, managing editor of Ettelaat. Doaei spent 11 years working in Khomeini’s office in the Iraqi holy city of Najaf, during Khomeini’s 1965-1978 exile there. Doaei described both the BBC’s report and the CIA cables as “lies,” adding to Al-Monitor, “The Imam, which we knew, was not a man to make contact with any foreigner, whether British or American.”

On June 7, Iranian parliament Speaker Ali Larijani lambasted the BBC for “engaging in a childish game of manipulating the documents.” Larijani cited former US National Security Council adviser Gary Sick as saying that the BBC’s account contains “selective quotations and some factual errors.” Of note, Sick downplayed the BBC report as a “tempest in a teapot” and wrote on his blog that he “has no knowledge of the reputed message from Khomeini to Kennedy in 1963.” Larijani further charged that the reports were invented in an attempt to legitimize ties between Tehran and Washington and to create the impression among Iranians that Islamic Republic officials maintained contact with the United States “even during the most difficult of times.”

Al-Monitor discussed the BBC report with Seyed Hamid Rouhani, who for 15 years worked as an aide to Khomeini in Qom and later during the years of exile in Iraq. These days, Rouhani is known as a historian of the 1979 Islamic Revolution. He told Al-Monitor, “The BBC report and the CIA paper are only claims. In addition, they are full of contradictions.” Rouhani claimed that Kamarei, who reportedly relayed a message from Khomeini to the United States in 1963, “had some contact with the shah’s court. Therefore, he was not a confidante to the late leader and basically he could not have met with Khomeini at all while he was under house arrest.” In this vein, Doaei told Al-Monitor that Khomeini and Kamarei’s relationship was “ordinary” and that he does not think Khomeini would have chosen Kamarei to “pass on any message to anyone.”

Rouhani, who has published a book series titled “Imam Khomeini’s Movement,” also told Al-Monitor, “Not a single Savak [shah-era secret police] document on Imam Khomeini ever pointed to any contacts between him and foreign governments or individuals.” He reiterated Larijani’s claims about the motivations behind the BBC report, alleging that apart from legitimizing relations with the United States, “The enemy is trying to tarnish the reputation of the Imam as an uncompromising figure. … They know other nations would not give in to arrogant powers if Khomeini’s thoughts and ideas spread throughout the world.”

Rouhani concluded, “America has felt that the Iranian nation is resentful about the recent negotiations and that it cannot tolerate relations with the United States, so America wants to make people believe that having ties with the Americans is not taboo and that even the Imam had engaged with them.”