Israel slow to recalibrate on Syria

Israel's original assessment of the Syrian war is no longer relevant, and the state must make strategic changes to face the threat of the regime, which is likely to remain in power with Iran's patronage. 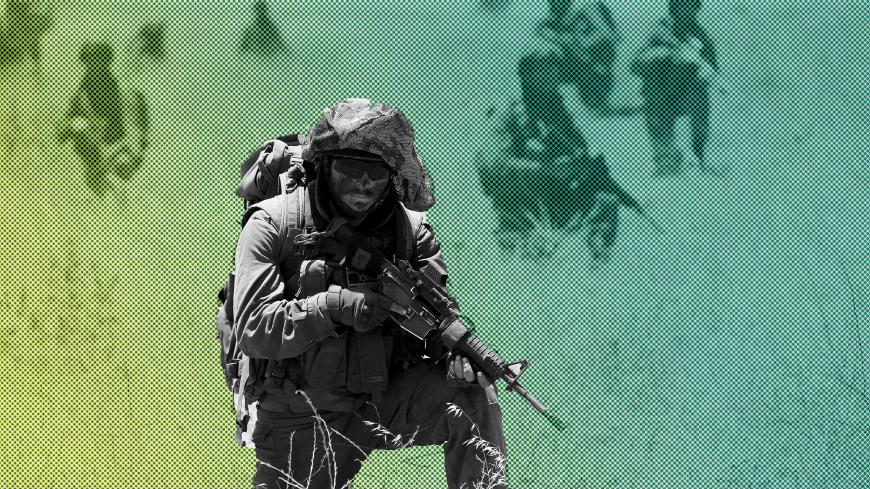 Israeli soldiers from the 605 Combat Engineering Corps battalion take part in a training session on the Israeli side of the border between Syria and the Israeli-occupied Golan Heights, June 1, 2016. - REUTERS/Baz Ratner

Middle East developments over the past few years — including the civil war in Syria, the rise of the Islamic State, the expected fall of Syrian President Bashar al-Assad and the violence in Iraq — have all affected Israel’s conception of national security. In light of these developments and the fact that for the first time in its history, Israel was not surrounded by conventional armies capable of threatening it, the Israel Defense Forces (IDF) made several important changes: armored divisions were dismantled, land forces were diverted to different positions, commando units were established and infantry units were upgraded. In general, the IDF adapted itself more to guerilla warfare and fighting against widely dispersed networks of terror organizations rather than traditional large-scale wars against regular standing armies.

But over the last few months, a new perspective is beginning to penetrate Israeli’s security officials. The working assumptions that took root in recent years have been undermined and are starting to fall apart. We are not yet at the stage at which the IDF is changing course, but if events continue to advance in the direction they have gone in the last half year, then anything is possible.

A formerly very high-placed source in Israel’s security system spoke to Al-Monitor last week. He said on condition of anonymity, “It’s high time to admit that perhaps all our assessments were erroneous. The prevailing consensus of the last five years was that Syria will never return to its former state. We thought that however this turns out, the Syrian state as we knew it had passed from the world. But evidently we were wrong.”

Israel’s top decision-makers have not changed course, but it is likely that such arguments are heard in private discussions, and top-secret intelligence assessments see it as a real possibility that Assad is capable of outsmarting those who prematurely eulogized him and Syria as we knew it.

“Syria is returning, that is clear now,” said the source. “It’s not about the quantity of territory, it’s about central rule. If nothing unexpected happens, in the near future, Assad will be declared the final, unequivocal winner of this war. Following that, the path to Syria’s rebuilding and reconstruction will be short.”

In the current era, predictions are difficult to make and anything is possible in the Middle East. Nothing here is over until it’s over — and sometimes not even then. Recall that former Prime Minister Ehud Barak announced in January 2012, shortly after the civil war in Syria began, that Assad’s fate was sealed and his regime would collapse within a matter of weeks. The Israeli assessment has changed drastically, and now the fighting is expected to continue for many long years with no real winner. However, now even this outlook is shaky.

The possibility that Syria may well reinvent itself is a dramatic change from Israel’s viewpoint, obliterating the idea that the conventional Mideast front with its regular armies and heavy weaponry was a thing of the past. “It is safe to assume,” said the source, “that the Iranians will invest a fortune in rebuilding the Syrian army and we will return to dealing with [Syria’s] Division 4 or Corps 5 or the various presidential forces we got to know in the decades preceding this war,” he said.

Israel’s military and intelligence analysts must now regret all the opportunities they missed: to create important alliances with pragmatic Sunni rebels, to deliver the final mercy blow to the Assad regime during those decisive moments when battles raged around the presidential palace itself or to create a kind of security strip in the territory opposite the Golan Heights. Israel did none of these things — and cannot be faulted for doing what was safest and most convenient: standing aside and wishing success to both sides, as the fighting spared Israel from any real worries from the north or east.

But it appears now that the fighting will not last forever. When it ends, a new Syria will emerge — one much more dangerous than its predecessor.

“This time,” an Israeli security source told Al-Monitor on condition of anonymity, “it will be a Syria that is connected to Iraq, that is connected to Iran, which are both connected to Hezbollah’s Secretary-General Hassan Nasrallah’s Lebanon. If in the past, the Syrian ruler was independent and it was impossible to pit him against Israel directly, it may soon be revealed that Syria has become a protectorate of Iran. It may become just another proxy with the goal of spilling as much Israeli blood as possible.”

On Aug. 23, Prime Minister Benjamin Netanyahu hurried off to another urgent meeting with Russian President Vladimir Putin in Sochi. According to the report by Pravda, Netanyahu appeared to be in a panic and spoke with great emotion. The Russian newspaper is well-known for its close contacts with the Kremlin. However, it evidently does not keep close tabs on the prime minister’s office in Jerusalem. Whenever Netanyahu has talked about the threats accumulating around Israel, he has always done so with great emotion, excessive pathos and wild exaggeration. His behavior in this meeting was evidently true to form.

Yes, developments on the Syrian front do worry Israel greatly, but they are not expected to change the basic components of Israeli deterrence. Israel will continue to emphasize that in the next confrontation in the north, it will destroy Lebanon, as the Lebanese state and Hezbollah are one and the same. The new Syria will find itself in a similar situation.

After more than six years of horrific warfare that led to the deaths of hundreds of thousands of people, there will be very few political and security figures in Damascus who will aspire to return to the horrors of war, at even greater intensity. Israel’s capacity for inflicting devastation is well-known to the entire Middle East, and it has only upgraded its abilities over the years. Thus, the tense quiet between Israel and its neighbors in the north is set against the backdrop of this deterrence equation.

The choice to violate the quiet remains in Tehran's hands.