The Kurdistan Region's independence referendum has opened the door for a new regional Kurdish movement promoted by a diverse coalition of dissidents, leftists, secularists and Islamists. 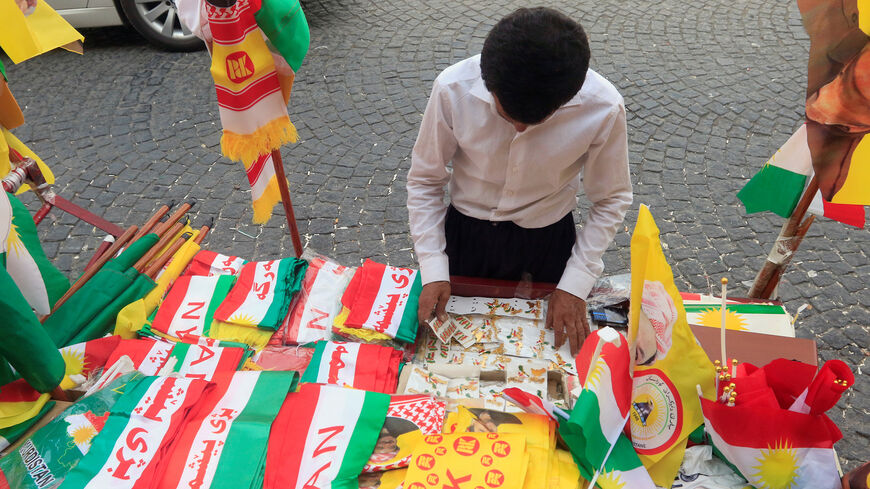 As referendum frenzy engulfs Iraqi Kurdistan, a prominent Iraqi Kurdish politician has been busy putting together a coalition of dissidents, leftists, secularists and Islamists in hopes of challenging the main ruling parties in the oil- and gas-rich region.

The new Coalition for Democracy and Justice, whose diverse members are campaigning for good governance and accountability, intends to challenge the political system, one of the most corrupt in the world, according to Transparency International. "The Kurdish leadership must work seriously to resolve the political, economic and governance crisis afflicting Kurdistan," wrote coalition head Barham Salih in the Financial Times in May. The British-educated politician, who spent a decade in Washington lobbying for the Kurdish cause, has good relations with the West and has held important positions, including deputy prime minister of Iraq and prime minister of the Kurdistan region.

As second deputy to Patriotic Union of Kurdistan (PUK) head Jalal Talabani in September 2016, Salih tried to wrest control of the party from his arch-rival Hero Talabani, the PUK founder’s wife. He failed when his coalition partner abandoned him. However, his fortunes may have changed. Washington, Ankara and Tehran are now scrambling for a reliable partner on the ground in the Kurdistan Region in the aftermath of the controversial referendum coupled with the deep resentment among the Kurdish public over the Kurdistan Regional Government’s financial crisis and the political deadlock.

Over the last three years, low oil prices, disputes with Baghdad, the presence of close to 2 million internally displaced Iraqis and other refugees, and the mismanagement of the economy have plunged the Kurdish region into a crippling financial crisis. The region’s political system has been in turmoil since October 2015 as the confrontation between various Kurdish parties over the disputed presidency of Massoud Barzani reached its zenith and one of the partners in the coalition government was forced out. The state of affairs has created deep public resentment toward the ruling parties in the region, and it has manifested in open rebellion against the independence referendum even though Kurdish nationalism runs deep.

“We live on a sea of oil, but the people have not benefited,” resident Rewas Mahdi told Al-Monitor. Mahdi, who lost 41 members of her extended family in the chemical attacks of the regime of Iraqi leader Saddam Hussein, added, “The poor do not have any power. The system is corrupt.”

Despite the euphoria surrounding the referendum, many in Iraqi Kurdistan have lost faith in the region’s political leadership — creating ideal conditions for an experienced politician like Salih to make a bid for power. Back in 2009, the Movement for Change (Gorran) rode a public wave of discontent and managed to secure 25 of the Kurdish parliament’s 111 seats, becoming the second most powerful party in the region.

But politics has since taught Salih that to instigate the change that Iraqi Kurds demand, he needs to assemble a wide coalition with other opposition parties — including Gorran. A source close to Salih told Peregraf that he is in negotiations with the party to form an alliance.

Despite the fierce opposition from Turkey, Iran and the United States to the Kurdish referendum, these three countries still wield considerable influence on Kurdish politics. The oil pipeline that is the main source of revenue for Iraqi Kurdistan goes through Turkey, while Iran is an important trading partner and, more importantly, an ally of the Kurdish parties in northern Iraq and in particular the PUK.

Salih has maintained cordial relations with the West and the US government in particular. Former National Security Agency director Michael Hayden, who has dealt with Salih extensively as deputy prime minister of Iraq, described him in his memoir as the “smartest man in southwest Asia,” “approachable” and “professional.” Back in 2010, it was Salih who appealed to the Americans to open a consulate in Erbil, the presence of which became important to sway the Barack Obama administration to bomb Islamic State militants when they came within 20 miles of the Kurdish region’s capital in August 2014.

These close relations with the Americans have made the Iranians weary of supporting Salih. Back in 2014, Iran stayed silent as the main wing within the PUK colluded with the Kurdistan Democratic Party (KDP) and the Arab Shiite parties in Baghdad to defeat Salih's bid for the Iraqi presidency.

But in recent months, Salih has been in contact with the Iranians and traveled to Tehran for meetings with senior officials. As such, it appears that he has managed to improve his relations with Iran and to relieve its concerns. When he tried to take over the PUK last September, Iran resented the move. In contrast, his announcing the formation of an electoral coalition has triggered no negative Iranian reaction. Tehran is aware that Salih has an important power base. Given Tehran’s opposition to the independence referendum and the way the main wing within the PUK collaborated with and has become close to the KDP over the plebiscite, it would not be surprising if Iran were to invest more in Salih than other players within the PUK. In this vein, Al-Monitor has learned from Iraqi Kurdish sources that both Ankara and Tehran are currently making overtures directly to Salih, independent of the PUK.

Looking ahead, the picture is still blurry. Salih’s future in the Iraqi Kurdish political system is uncertain. The political and financial crises, while a real headache for the ruling parties, have presented an ideal opportunity for Salih to make a bid for power by bringing together dissident voices. But Kurdish politics is driven by personalities, and given Barzani's impeccable performance during the referendum, Salih needs to be both measured and bold in his new political endeavor.