How Turkey fits into the Qatar puzzle

Turkey's military presence in Qatar seems to be complicating an already complex situation for the coalition that recently cut ties with Doha. 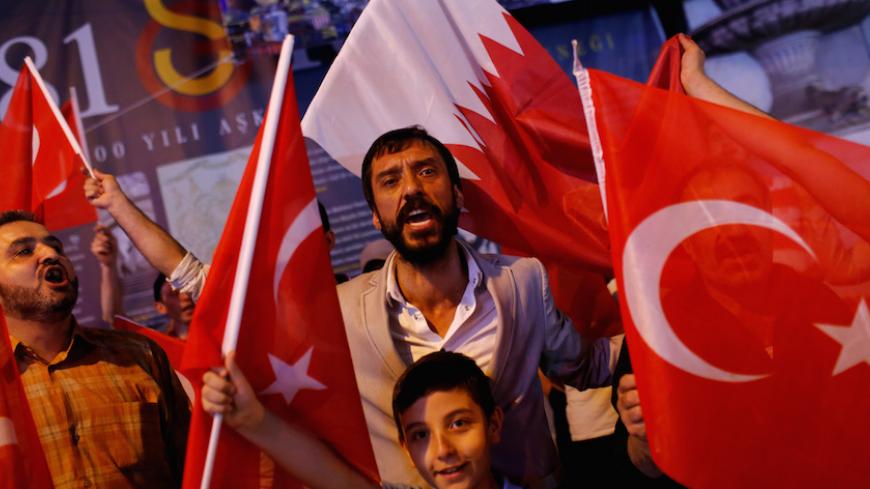 People shout slogans as they hold Turkish and Qatari flags during a demonstration in favor of Qatar in central Istanbul, Turkey, June 7, 2017.

After Bahrain, Egypt, Saudi Arabia and the United Arab Emirates cut ties with Qatar in early June, accusing it of supporting extremists and terrorist groups and being allied with Iran, they presented Qatar with a list of 13 demands. Among those requirements for restoring relations was to close the joint Qatari-Turkish military base in Qatar.

The ultimatum indicates how the three Gulf states punishing Qatar with embargoes see the Turks as severely undermining their efforts to pressure the Al Thani royal family into capitulation.

Turkey not only rejected Saudi Arabia and its allies’ ultimatum but also deployed more troops to Qatar. Turkish tanks were recently seen rolling through the capital, Doha, which of course cranked up the heat under simmering tensions among the Middle East’s Sunni Muslim nations. Turkey, Saudi Arabia and Qatar are all mainly Sunni, but Turkey and Qatar have friendly relations with some Sunni Islamist groups such as the Muslim Brotherhood, which the Saudis, the UAE and Egypt consider a terrorist group.

If Kuwait and other “neutral” mediators fail to resolve the row, Turkey’s continued military presence in Qatar could bring the situation to a boil.

To be sure, the US military presence in Qatar provides the emirate with a security guarantor. The main deterrent against any Saudi/UAE invasion of Qatar is the American base in Al Udeid. Unquestionably, the UAE’s motivation for subtly offering Washington the opportunity to transfer the US Central Command forward headquarters and its 10,000 troops to the UAE is to deprive Doha of leverage and make Qatar increasingly vulnerable to future pressure from its neighbors.

Current and former Western diplomats are voicing concern that the GCC’s row could escalate into a military confrontation, which would create yet another major dilemma for Turkey’s foreign policy in the Middle East — on top of the crises in Iraq and Syria, which have spilled into Turkey. It’s unclear how, if this stalemate continues, the Turkish military presence in Qatar will affect the Gulf’s balance of power. Regardless of whether Turkish troops in the emirate have the military might to repel any potential invasion, their presence lends political and moral support to the Al Thani family and raises the stakes for any GCC state that might consider taking coercive action. The fast-tracking of Turkish troop deployments to the emirate after the crisis erupted was Ankara’s message to Doha that Qatar must not give in to pressure from its neighbors.

Despite protests from Turkey’s opposition parties, who warn that their country’s military presence in Qatar and its pro-Doha position are dangerous, Ankara clearly believes that protecting the emirate from Saudi/UAE pressure will advance Turkey’s national interests. Ankara values Doha for its alignment with Turkey on a host of regional conflicts — in Libya, Syria, Egypt and Iraqi Kurdistan — with both capitals backing the same Sunni Islamists across the Middle East. The Turks want to attract more Qatari investment to their economy. Turkey’s major construction firms, which drive their country’s economic growth, are seeking more lucrative contracts from Doha. Turkey views the emirate as a major arms market for its defense firms and sees Qatar, the first Arab country where Turkey established a military base, as an integral part of its grander strategic posture across the Middle East and Africa.

Regardless of how the row unfolds, the Turks are elevating their growing relationship with Qatar to new heights by standing by Doha amid an existential and unprecedented threat to the Arab Gulf state’s sovereignty and independence. Just as Qatar’s emir was the first foreign leader to call Erdogan nearly a year ago amid the failed coup attempt in Turkey, which the Turkish president recently suggested was supported from elements within the GCC (a remark undoubtedly directed at the UAE), Ankara sees Doha as the victim of a regional conspiracy. Put simply, Erdogan, who is emotive about Qatar, sees the emirate’s security as linked to Turkey’s.

In May, Turkish voices opposed to their country’s base in the emirate cited concerns that Turkey was subjecting its military to the dangers of a potential military confrontation between Qatar and Saudi Arabia, while also inflaming Iran. Looking ahead, the Arabian Peninsula’s shifting geopolitical order is raising the stakes for Turkey. Legitimate concerns remain that Turkey could find itself in the crosshairs of another conflict fueled in no small part by the Saudi-Iranian rivalry.