Tillerson calls on Saudi bloc to lift blockade on Qatar

The US secretary of state, after meeting Omani Foreign Minister Yusuf bin Alawi today in Washington, called for the lifting of the blockade on Qatar as a sign of good faith. 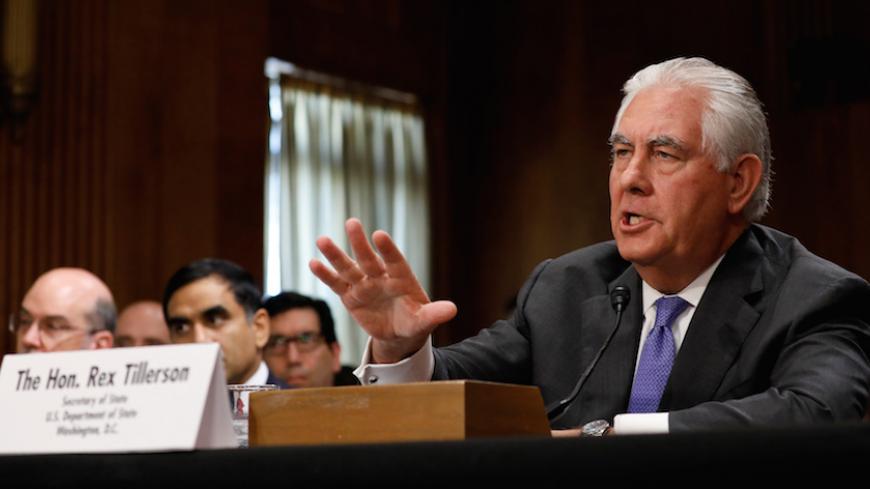 WASHINGTON — Secretary of State Rex Tillerson today urged Saudi Arabia and its Arab allies to lift their blockade of Qatar as a sign of good faith following what he called “aggressive” efforts by Doha to address their concerns.

Tillerson made the comments alongside visiting Omani Foreign Minister Yusuf bin Alawi bin Abdullah at the State Department amid signs the Qatar crisis may be easing. Saudi Arabia, the United Arab Emirates, Bahrain and Egypt began imposing a blockade on gas-rich Qatar in early June.

Oman’s leader, Sultan Qaboos bin Said, has a keen interest in seeing the dispute between rival Gulf Cooperation Council (GCC) members peacefully resolved as his country braces for a possible leadership transition. In power since 1970, the childless 76-year-old has suffered from colon cancer for several years.

“The Qataris have continued to move forward … to address many of the terrorism, terror financing, counterterrorism concerns that people have, and they have been very aggressive in implementing that agreement,” he said.

A top UAE official, in one of the first conciliatory messages since the crisis erupted in June, also praised Qatari actions today. In a tweet, UAE Minister of State for Foreign Affairs Anwar Gargash praised Qatar for showing an interest in taking action against dozens of people with alleged Qatari links that the UAE and its allies have designated as terrorists.

"The Qatari decree to amend the anti-terrorism law is a positive step to deal seriously with the 59 terrorists," Gargash tweeted.

Oman’s top diplomat did not speak to the press at the brief encounter. But Oman — a benefactor of a US security guarantee — wants to see the GCC/Qatar dispute resolved equitably, Gulf experts said.

Qaboos “recently appointed somebody seen as a likely successor to take over,” Sigurd Neubauer, with the Arab Gulf States Institute in Washington, told Al-Monitor. “My point is that Oman looks at how the Qataris are being treated. They have an impending succession coming. Unless this thing with Qatar is nipped in the bud, Oman [fears it] could be next.”

“The Saudis have always tried to coerce Oman to take [Riyadh’s] lead, to submit to its position,” Neubauer said. “It has a chilling effect on Oman.”

The Omani diplomat was also due to hold meetings at the White House today with Trump’s envoy for international negotiations Jason Greenblatt on possible confidence-building steps to boost Israeli-Palestinian peace talks, Neubauer said. Oman hosts an international center for clean water research, the Middle East Desalination Research Center, which the US government has seen as a potential vehicle for advancing Israeli-Arab cooperation.