Protests continue in Morocco despite crackdown 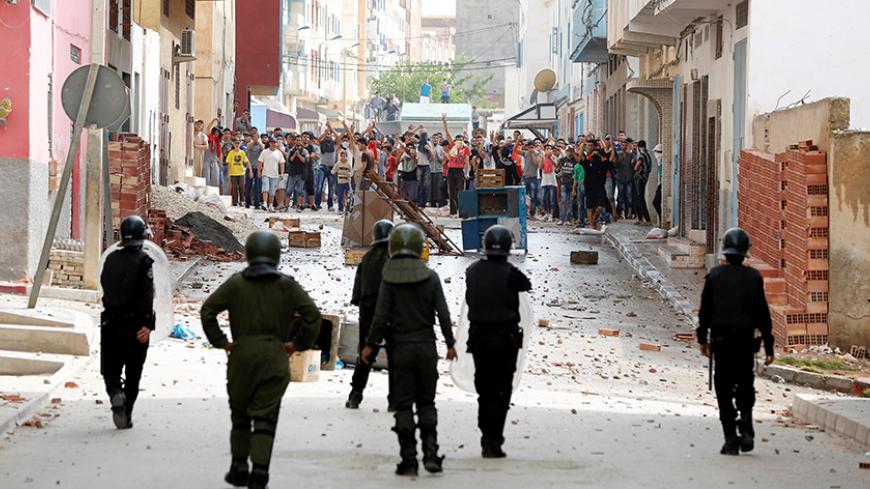 Protesters throw stones toward riot police during a demonstration against alleged corruption in the provincial town of Imzouren, Morocco, June 2, 2017. - REUTERS/Youssef Boudla

A demonstration in support of Hirak, a protest movement that has been ongoing for eight months in the Rif region, in northern Morocco, was violently repressed July 9 in Morocco’s capital, Rabat.

Although they were prevented by police forces from gathering in front of the parliament, demonstrators chanted slogans and called for the release of dozens of activists arrested in the Rif region, including Sylia Ziani, a 23-year-old singer currently detained at the Oukacha prison in Casablanca. In recent weeks, several protests expressing solidarity with the Hirak movement have been brutally dispersed throughout the country.

But in spite of an unprecedented crackdown, protesters continue to take to the streets. On July 16, hundreds of people expressed support for Hirak in Rabat. In al-Hoceima, where the Hirak movement initiated, a national march, which was announced before the arrest of the movement's leaders in May, is expected to take place July 20.

On July 17, local authorities in al-Hoceima declared they were forbidding the march. Activists, however, said they were planning to march July 20. The Moroccan Association for Human Rights (AMDH), leftist political parties such as the Federation of the Democratic Left, the Marxist-Leninist party Democratic Way and the tolerated yet unofficial Islamist organization Justice and Charity condemned the ban. In addition, the AMDH has announced a sit-in in Rabat in front of the parliament the same day.

On July 4, security forces officially started a progressive withdrawal from al-Hoceima, including its central square where the public would gather, in an effort to calm things down. But protesters have still found it difficult to organize protests with remaining police forces obstructing them. As they vowed to keep on calling for the release of the detainees, whom they consider political prisoners, citizens participating in the Hirak movement took to the beach where they have regularly protested.

On Oct. 28, 2016, the gruesome death of Mouhcine Fikri, a 31-year-old fish vendor who was crushed to death by a garbage truck as he tried to take back fish that had been confiscated, prompted protests calling for a thorough investigation of the accident's circumstances. But the sentencing of seven people accused of being responsible for Fikri’s death to prison for five to eight months has not made al-Hoceima’s streets quieter. The anger grew into the social movement that was named Hirak, denouncing the marginalization of a region that historically has had tense relations with the Makhzen, a local term to designate the Moroccan state and the administration, and whose inhabitants feel left out.

After Fikri’s death, protests broke out in more than 20 cities, raising fears of a wider uprising. But the Hirak movement was active only in the Rif area and without any major reaction on the part of the authorities. In May, however, the movement’s leading activists were arrested. According to al-Hoceima's AMDH office, more than 200 people — including those in prison and those who have been released on bail pending trial — have been arrested in connection with the Hirak movement, including seven journalists who are currently detained.

Among them is Nasser Zefzafi, the leader of the movement whose trial started July 10 and who is accused of threatening the internal security of the state.

According to Human Rights Watch, 46 people have been sentenced so far to up to 18 months in prison.

Since May, solidarity protests with the Hirak movement, which were often repressed, have taken place in Rabat, Casablanca, Marrakech, Agadir, Khouribga and several other cities. According to activists, 50,000 people in Rabat protested on June 11, the biggest protest since the February 20 Movement in 2011 in the wake of the Tunisian and Egyptian revolutions.

Analysts as well as activists warn that discontent is growing in Morocco, which is seen as a model of stability in the region and praised by the international community for its handling of the protests that shook the country in 2011. Apart from the numerous solidarity protests that have been organized, several social movements are expressing demands similar to those of the Hirak movement in areas that are marginalized, such as the Rif region. “All the indicators demonstrate that we are heading toward a social explosion," Abdellah Lefnatsa, a human rights activist and member of the Democratic Way, told Al-Monitor.

Hirak’s demands — social justice, better infrastructures, access to health and education — have resonated in all parts of the country, most recently in Beni Mellal, in central Morocco, and in Imintanout and Ouarzazate in the south. The majority of these movements are not new and have been a result of what activists call the “February movement spirit,” which developed a new culture of protests that has touched the most remote areas of the kingdom.

In recent months, people have also increasingly called for access to health care and have drawn attention to the reduction in water resources. In the south of the country, in Zagora and Tinghir, the inhabitants demand the building of health facilities and access to clean water, sometimes amid heavy police presence. In Imider, an uninterrupted sit-in — the longest in Morocco’s recent history — has been going on since Aug. 23, 2011, when the inhabitants decided to close a water valve leading to a silver mine exploited by the mining group Managem — which is part of the National Investment Company, a holding firm mainly controlled by the royal family — that they claim was greatly diminishing their access to water.

To this day, they are present at the top of Mount Alebban to ensure the valve remains closed. The residents are also demanding more job opportunities at the mine and are denouncing the effects of pollution in the area.

But these movements are isolated and have not had any impact. In most cases, the authorities weaken them by partially responding to their demands but also resorting to repression, by cracking down on protests and arresting activists. Activists told Al-Monitor that in Imider, 33 people have been jailed — four of whom are still detained — since August 2011.

Since the weakening of the February 20 Movement, only Hirak has managed to worry the Moroccan authorities. Former member of the Unified Socialist Party Mohamed Boulaich told Al-Monitor that the Hirak movement is well-organized and “has chances to resist and last.”

Khadija Ryadi, the former president of the Moroccan Association for Human Rights and 2013 United Nations Human Rights Award winner, told Al-Monitor that Hirak is a new chapter in the struggle for social justice, freedom and dignity initiated in 2011. She said, “These are waves that come and go, and they all leave something behind. There has been the 2011 wave, the 2013 wave [when protests against the royal pardon of a Spanish pedophile led the king to publicly reconsider his decision for the first time], other less noticeable waves and now the Hirak wave.”